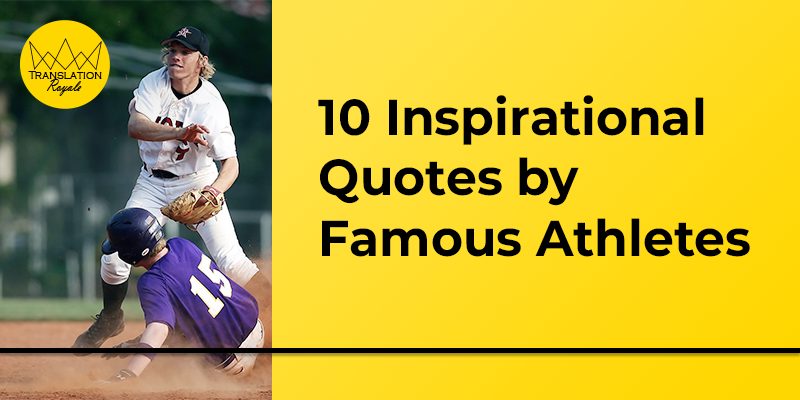 Sports are one of the many metaphors we use as lenses to make sense out of our own personal lives.

After all, sports manage to condense life’s most important lessons into two 45-minute halves, nine innings, four 12-minute quarters of play. Or in a 30-second soundbite, if you will.

That’s why we’ve scoured through the back pages of sports and came up with a list of 10 of the most inspirational quotes by famous athletes of all time – to motivate, inspire, and bolster your iGaming content strategy with engaging, hard-hitting content.

Michael Jordan’s famous quote on failure shows us why he’s the greatest basketball player of all time. Every tear he shed, every minute of sleep he lost, every heartbreak and failure he encountered over the course of his career ultimately led to his success – to the tune of five NBA MVP awards, six NBA championships (winning the finals MVP in each), and 14 NBA All-Star selections, just to name a few.

“I’ve missed more than 9,000 shots in my career. I’ve lost almost 300 games. 26 times, I’ve been trusted to take the game-winning shot and missed. I’ve failed over and over and over again in my life. And that is why I succeed.”

Muhammad Ali wore a lot of hats as the “Greatest” – from an Olympic gold medalist, heavyweight champion of the world, to prominent civil rights advocate – and he went through some massive peaks and troughs to becoming the inspirational figure he remains to this day.

Ali was a rare breed of athletic acumen, dedication, perseverance, and flair – no matter what life threw at him, he always emerged a victor in every arena.

“Only a man who knows what it is like to be defeated can reach down to the bottom of his soul and come up with the extra ounce of power it takes to win when the match is even.”

Talent is just one part of the equation. Work ethic is another. Not everyone has the rare blend of talent and work ethic – but the latter has taken more athletes on the precipice of greatness to new heights when raw talent wouldn’t. Ask Jeter, he knows.

“There may be people that have more talent than you, but there’s no excuse for anyone to work harder than you do.”

4. Larry Bird Has No Chill

There are many things outside your control – but one thing that isn’t is your work ethic. Getting stuck in 100% is what separates the wheat from the chaff in anything that they do. And never giving up until the fat lady sings is what made the “Hick from French Lick” one of the most dominant players of the 80s.

Larry Legend’s drive, will, and intensity was the stuff of, well, a legend – with his Celtics teams adopting his never-say-die attitude en route to winning the NBA Championship in 1981, 1984, and 1986.

“Push yourself again and again. Don’t give an inch until the final buzzer sounds.”

Wayne Gretzky, aka “The Great One,” is easily the greatest hockey player to ever lace up a pair of skates. This four-time Stanley Cup winner averaged more than one goal per game in over 20 years on his way to holding 61 NHL records upon his retirement in 1999.

Every time #99 came out to play, you just knew he was going to put his stamp on a game – he never met a shot he didn’t like.

6. Vince Lombardi on Rising up Against Adversity

When life knocks you down, you need to get up again. It doesn’t matter if you’re a professional athlete trying to make a comeback, an employee missing a crucial work deadline, or simply not being at your best in the gym today – you always have a shot to pick yourself up, start all over again, and be better than you were yesterday. Carry on!

7. Pelé on the Joy of Winning

Pelé is widely considered as the greatest football player of all time. He is a three-time World Cup champion who electrified audiences all over the world with his thrilling improvisation and perception of the game.

One common thing that the greatest sportspeople of all time share is that they want the thrill of the chase and the struggle before the ultimate triumph – because that’s where legends are made.

“The more difficult the victory, the greater the happiness in winning.”

It happens in every sport: someone has to win and someone has to lose. And often, the difference between winning and losing boils down to hard work, determination, and who ultimately wants it more. The same is true in business and in life.

Which approach will you take? We know which one the Major League Baseball Hall of Famer and two-time World Series-winning manager, and lifelong Dodger took in his illustrious career.

“In baseball and in business, there are three types of people. Those who make it happen, those who watch it happen, and those who wonder what happened.”

9. Leo Messi Is Never Satisfied With Being Good Enough

One common denominator that the greatest sportsmen of all time have is the will and desire to be the best in the game.

And there’s little doubt that Messi is the best player in the world still actively playing to this very day (sorry, Cristiano Ronaldo fans.) The unprecedented six-time FIFA Ballon d’Or winner still thinks he has a long way to go.

The best active football player today, a generational talent nonetheless, still wanting to do and achieve more. How’s that for some inspiration?

​​“I always want more. Whether it’s a goal, or winning a game, I’m never satisfied.”

10. Billie Jean King on Being a Champion

Tennis legend Billie Jean King’s record 20 Wimbledon titles, 13 United States titles, and four French titles, and her athletic ability, rocket backhand, and strong net game are just half of what makes her a champion on the court.

Off the court, King has inspired countless young women to pursue their dreams of athletic greatness to this very day.

“Champions keep playing until they get it right.”

There’s no shortage of inspirational, witty, motivational, and humorous quotes from the realm of sports, and their enduring appeal goes beyond just mere entertainment. That’s because sports quotes are more than just water cooler talk fodder from an iGaming content marketing perspective.

See, we already know how time-consuming it is to maintain an active presence across a smorgasbord of social media networks. We’re also aware of how challenging it is to constantly create relevant and high-quality content that adds value to your clients’ lives.

Add the fact that it gets harder to create original and diverse content once the well has dried up when your followers demand more of what got them hooked in the first place, and you have a full-blown content shortage on your hands.

Well, sports quotes present another way for online sportsbooks and iGaming operators to engage their audiences on a positive level by sharing motivational reminders on how to deal with adversity in daily life and by providing them with another lens with which to view the world.

Moreover, quotes from famous athletes and sports personalities lend themselves well to being repurposed for a wide array of platforms. They’re simply a fun bit of content to spice up your content marketing strategy.

For instance, they can be used as visuals for social media posts or these images could be turned into a blog article. The point is this kind of content can be constantly iterated on to suit your brand’s needs.

Sports have a way of bringing people together in spite of their differences, real or perceived – and inspirational quotes from the athletes that your clients follow are a surefire way to reel in engagement by the truckload.

How did you like Sebastian Scheplitz’s blog post “10 Inspirational Quotes by Famous Athletes (to Spice Up Your iGaming Content Strategy)”? Let us know in the comments if you have anything to add, have another content idea for iGaming blog posts, or just want to say “hello.” 🙂