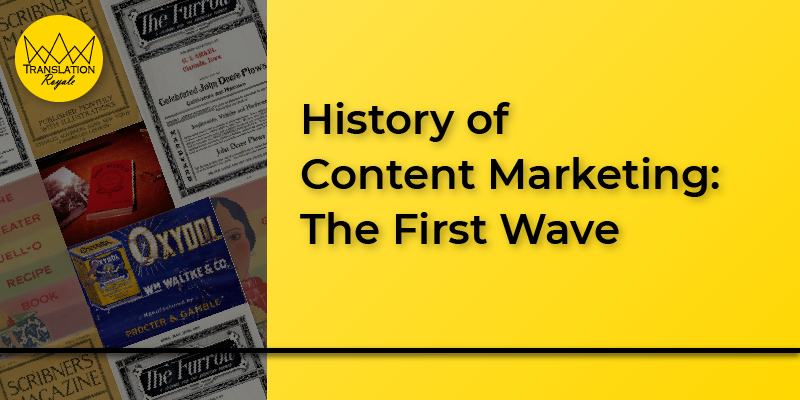 Since the earliest days, content marketing is all about creating compelling content to persuade customers how a product or a service can add extra value to their lives.

For sure, we all know that no one gave out free e-books or posted ads on Facebook back in those days. But, what exactly happened during those time which shaped the way content marketing it is now? So, let’s take a look at who the pioneers were and how they paved opportunities for modern-day content marketers.

Scribner’s Magazine was an American periodical magazine produced in 1887 by Charles Scribner’s Sons. The main goal of this magazine was to generate sales of its published books by several famous authors like Ernest Hemingway and F. Scott Fitzgerald.

It was very well-known for its extensive art and literature criticism and highly praised for being the first of any magazine to include color illustrations later in the 1890s.

By strategically leveraging works of influential writers at that time, Scribner’s established a huge success in brand recognition while also boosting sales of its published work of the same authors.

Perhaps, we could say that this marketing strategy is a pioneer of what is known as “influencer marketing” these days.

Founded in 1886, Johnson and Johnson was the first company to mass-produce a wide range of antiseptic medical supplies and sterile surgical equipment. However, there was very little knowledge of sanitized clinical treatments during that period which made the company quite challenging to sell their products.

Therefore, in 1888, Johnson & Johnson introduced the concept of sterile surgery and medical procedures through its manual called “Modern Methods of Antiseptic Wound Treatment,” which later became the standard manual on sterile surgery. Just within a few months, more than 85,000 copies were distributed to all the medical professionals across the United States for free.

But, here is what makes this booklet interesting for the history of content marketing. Right in the middle of this 48-page surgical manual, was a catalog of products that were mentioned in the instructions along with the respective prices.

By providing valuable content for free first to its niche audience, the company subtly tried to convert the readers into potential customers. That, in my opinion, is 18th-century content marketing strategy at its finest.

With the first edition published in 1895, John Deere’s The Furrow Magazine is often regarded as the pioneer of content marketing. It is also known to be the longest-running branded U.S. magazine and most widely circulated farm magazine in the world.

It was specifically aimed to educate the American farmers on making profitable agriculture businesses. The topics ranged from the latest trends in the agricultural industry to various challenges that farmers were facing at that time. This was indeed a brilliant example of creating better customers through informative content.

Today, John Deere’s The Furrow Magazine is published in 14 languages and distributed to 115 countries worldwide. And of course, it is also available digitally, and on social media.

The history of the Michelin Guide a.k.a the world’s most trusted dining guide didn’t start out as the way you thought it would be. They are published by the French tire manufacturer, Michelin, with an initial purpose of boosting car tire sales.

There was a time when there were fewer than 3,000 cars in the whole of France. To increase the demand for cars, and in turn, the purchase of car tires, the Michelin brothers published a free travel guide in 1900 to encourage more motorists to hit the road. The guide had all the useful information a traveler needs, such as maps, tire changing techniques, and listings of petrol stations, hotels, and restaurants.

As readers’ attention to the restaurant review section grew significantly over time, the Michelin Brothers recruited mystery diners to review the restaurants anonymously and later on began to award stars for fine dining establishments. It has since then evolved into the world’s most trusted restaurant bible which now rates over 30,000 establishments in over 30 territories across three continents.

When Orator Woodward, Genesee Food Company’s owner, bought the patent for Jell-O in 1899, sale rates were flat, and business wasn’t profitable. It was so bad that he almost sold the business for $35. That was mainly because of one big consumer problem: people didn’t know how to use Jell-O.

To overcome this issue, Orator and his marketer William E. Himmelbaugh decided to advertise Jell-O in the Ladies Home Journal and promoted it as “America’s Most Famous Dessert,” which led to a big boost in sales.

In 1904, Genesee distributed recipe books that tell people hundreds of ways to make delicious dishes using Jell-O as the main ingredient. The success of this campaign shot up and in within two years, and the company had already made $ 1 million in sales.

By providing useful content targeted towards relevant customers and having a whole lot of faith, Orator revived Jell-O from a dying business to a highly-profitable one in seven years.

Sears-Roebuck and Company is a major American retail and mail-order company which sells a range of merchandise both in-store and through catalogs. Their target markets were farmers and people living in rural areas who did not have convenient access to retail outlets with fair and transparent pricing. With its catalog system, Sears could deliver their goods to those customers in much lower and standardized pricing.

In the 1920s, Sears discovered a new marketing strategy to reach out to their farmers, i.e. radio broadcasting. At first, they bought airtime on other radio stations and later on launched their own radio station called WLS Radio, which stood for their slogan “World’s Largest Store.”

Not only did they advertise their products from the catalog but also sold radios so that audiences could tune into their broadcasts. That’s smart!

During 1920-1921, when the Midwest Farmers faced critical economic deflation, the company kept them up-to-date with all the necessary information supplied by Sears Roebuck Agricultural Foundation to keep their business strong during the economic crisis.

According to the 1930 Census data, more than 40 percent of American households (about 12 million!) owned a radio. We can even call it ‘the internet of the 1930s’. The rising popularity of radios creates a surge in demand for radio shows to entertain the listeners.

Proctor & Gamble saw this opportunity and grabbed its chance to hop on the bandwagon in the 1930s. It was one of the first companies to produce radio drama serials with an aim to sell more soap products by entertaining homemakers through these radio programs. It was their sponsorship of these programs with brands like Duz and Oxydol that coined the phrase “soap opera.”

Their most successful production was “The Guiding Light” show which was sponsored by P&G White Naphtha Soap. Started originally as a radio series in 1937 and later broadcasted as a TV series in 1952, this show holds the Guinness World Record for the longest running show in broadcast history.

As a forerunner of modern-day advertising and content marketing, they also sponsored the first TV broadcast of a baseball game in 1939.

In the late 19th century, the technology which brought entertainment to the heart of the customers through audio waves transformed into a medium which can entertain people visually in the form of motion pictures, i.e. television. Later on, when colored-broadcasting was introduced, it created even better marketing opportunities for companies to advertise their services/products.

However, it was not that simple to promote toys through TV commercials at that time. The ad had to show kids playing with real toys, airtime was limited, and only little animation was allowed. Since there were no such restrictions for comic books, they decided to create a series of 30-second animated TV commercials just to promote G.I. Joe comic books.

To the creators’ delight, it became a huge hit and within two months of releasing the first comic book, 20% of boys aged between five and twelve, had two or more G.I. Joe toys. Since then, it has become one of the most beloved action heroes across the globe.

If you are curious about how these ads were, here is a compilation of all their animation commercials:

It was the first of its kind for a company to promote products through comic books and TV commercials indirectly, and this content crossover strategy has become of one of the best examples in the content marketing history.

This method was so successful that other companies used the same approach to promote comic heroes such as He-Man, M.A.S.K, and even the well-known Pokémon.

Within the past 130 years, we can see that the content marketing trend has shifted significantly from magazines with hand-drawn illustrations to radio soap operas and TV shows to promote toy figurines. This is solid proof that content marketing is an essential catalyst to ignite the interest of the customers which will, in turn, boost sales and brand visibility of a company.

Now, let’s check out “History of Content Marketing: The Second Wave” to witness how these marketing tactics took a sharp turn as the digital age came to life.