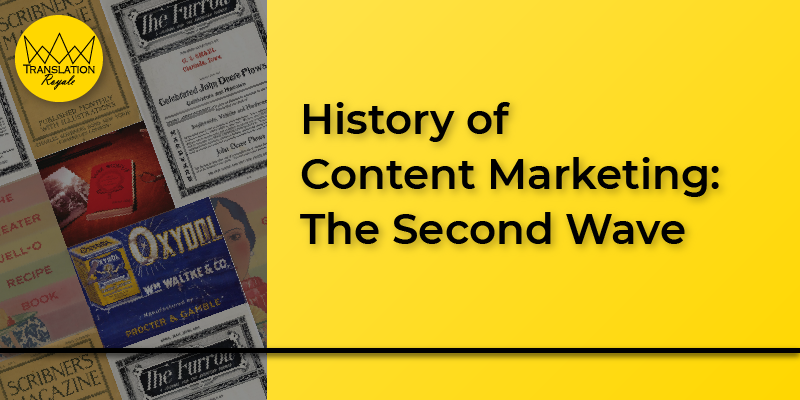 As we’ve laid out in our article “History of Content Marketing: The First Wave,” even before “content marketing” was a thing, Johnson & Johnson already knew how to play the game by distributing free content to educate its customers and boost product sales. Now that’s exactly what e-books nowadays are trying to do. Jell-O followed the same footsteps in 1904 with its free recipe books which later helped them make $1 million in sales within two years.

As technology became a part of households in the 1930s, brands like Sears and P&G took content marketing to another level with their branded radio programs, making them the pioneers of audio content marketing.

Those were all the historic moments of the content marketing industry before digital technology came into our lives.

So, what exactly happened during the second wave of content marketing history?

Thanks to Tim-Berners Lee, the World Wide Web became a global sensation in 1991, and it has now become an evitable part of our daily lives. As information and communication started shifting from prints, radio, and TV to the internet, the content marketing industry had to take a big leap to catch up with this worldwide craze. In a way, this major shift in technology gave birth to a new era of what we now call – Digital Marketing.

The GNN website consisted of four main sections: a news section, an online magazine, The Whole Internet Interactive Catalog, and a global marketplace containing information about products and services.

The legendary clickable ad spot was sold to a law firm called Heller Ehrman White & McAuliffe. A couple of years later, these online ad spaces on the GNN website were priced at $110 to $11,000 per week.

1994: The Birth of Blogging and Hotwired Magazine

1994 marked the year when the first ever commercial web magazine, Hotwired, was launched. On October 27 of the same year, Hotwired launched the first web banner ad on its website which was rumored to be sold to AT&T company for its “You Will” campaign.

Nowadays, digital ads can be seen everywhere from search engines, social media platforms, emails to blogs, and even mobile apps.

During the same year, it was said that the first ever blog was credited to Justin Hall, a college student from Swarthmore College. It was known as online journaling as the term “blog” hasn’t been coined yet at that time. Nonetheless, this has made him recognized as one of the pioneer bloggers in history.

The term “blog” was originally derived from “weblog,” a word coined by Jorn Barger in 1997 to describe the process of “logging the web.”

Later in 1999, Peter Merholz separated the term “weblog” into “we blog,” and hence the word “blog” was born. Once a simple version of an online diary has now become one of the main channels of content marketing strategies.

The early 21st century was truly an era of a social media network explosion. Channels like Facebook, Twitter, Youtube, and Instagram completely changed the way people communicate with each other and, of course, it also means that several new opportunities arose for brands to interact with their customers, both new an existing.

On October 23, 2003, the original concept of the legendary social media platform “Facebook” was given life by no other than CEO Mark Zuckerberg. With currently over 2.32 billion monthly active users in 2018, once a pure social networking site has transformed into a platform of choice for B2C content marketing.

Surpassing the popularity of all other keywords in 2004, “blogging” broke the internet – enough to be announced as “The Word of The Year” by Merriam-Webster Dictionary.

With the launch of Youtube in 2005, the digital content marketing industry saw the dawn of a new era, i.e. viral video marketing campaigns.

In 2006, Blendtec – a U.S. based blender manufacturer, debuted a series of “Will It Blend?” videos on Youtube to promote awareness of their blending machines. They blended everything from marbles and crowbar to Chromebook and iPad to prove how strong and powerful their blenders are.

Check this video out to see why their campaign created a stir on youtube:

Within a year of debut, these videos have helped drive sales of the company’s $399 high-end consumer blenders up to 500% as reported by CNN. By creating content that is well-adapted to technology and time, Blendtec hit the jackpot with its creative videos.

When we talk about content marketing in the digital era, we can’t leave out Twitter. Founded in 2006, Twitter also started out as a social networking site. Because of its real-time updates and better organic reach, it is a preferred social platform for businesses like iGaming operators who need to constantly roll-out live score updates and tournament results. (link to the social media article)

One famous example in particular that created a buzz on Twitter with its real-time marketing is Oreo’s “Dunk in the dark” ad.

When lights went out during a Superbowl game on 3rd February 2013, Oreo’s marketing team grabbed the chance and immediately posted a tweet that says “Power Out? No Problem” with an image that said, “You can still dunk in the dark.”

Wittily enough, the Oreo team won the internet with its responsive social media marketing in a shot.

Power out? No problem. pic.twitter.com/dnQ7pOgC

Founded in 2010, Instagram paved its way to the top and claimed a spot among other social media giants like Facebook and Twitter. Because of its fun and interactive features such as Instagram story, Polls, IGTV and Boomerang, companies can now express their brand stories as creatively as they want to be.

Another company that knows how to take full advantage of viral youtube sensations is no other than ‘Dollar Shave Club,’ a company that delivers high-quality razors right to customers’ doorsteps for just one dollar a month. It is perhaps one of the most popular examples among brand strategists and content marketers.

On 6th March 2012, they dropped their first viral video featuring CEO Michael Dubin talking about how blades from Dollar Shave Club are better than other brands in the most sarcastic and straightforward way.

Within the first 48 hours of launching the video, they had already received 12,000 orders.

From this example, we can see that with the help of powerful video storytelling, even a startup that sells high-quality razors for one dollar a month can turn into a billion-dollar business.

As we approached from the early 2010s to 2020, content marketing strategies have definitely become more personalized. At the same time, more emphasis is given to the quality of content than the quantity for better user experience.

Google and other search engines are continuously upgrading their protocols to clear out spammy content and deliver results that match users’ search intent. That’s why empathizing with your users is as important as delivering high-quality content if you want to be in today’s SEO competition.

Gone are the days when marketing materials were continuously distributed one-sidedly by companies. Nowadays, famous companies like GoPro and Redbull highly encourage and endorse their customers to create viral videos and posts, and in turn, leverage their brands on this user-generated content.

From printed magazines and radio programs to TV commercials, companies have used several channels to create a more meaningful connection with their customers. According to Content Marketing Institute, social media content is the most used content type of to promote their brands by UK marketers in 2018 – and it’s only growing in the future. With so many social media automation tools (link to social media tools article) available out there, content management on these platforms has never been easier nowadays.

Content marketing doesn’t have one method to rule them all. While the core value of content marketing, i.e. providing real value to customers’ lives, remains as a constant factor, strategies will keep evolving to adapt to business goals, technology trends, and demographics.

Creativity is in your hand and the sky’s the limit. Who knows? One day you might become a game changer in content marketing history as well.