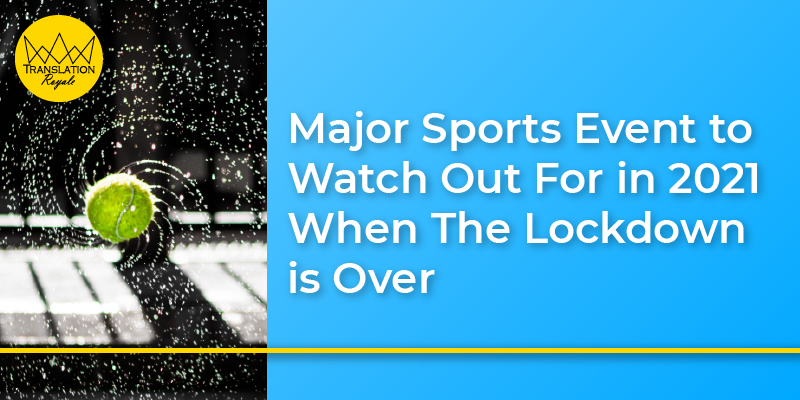 The COVID-19 pandemic has turned out to be a life-changing event that affects us all. Unfortunately, many people have been laid off, and businesses in all sectors have been severely affected.

The sports world was one of the first industries to feel the financial impact of the pandemic, with all major football leagues being forced to shut down just weeks after COVID-19 went rampant in Italy.

Shortly after, all major sports events were pushed back too, and this invariably presented many tough challenges for companies involved in sports – not the least for iGaming sports betting companies.

Let’s take a quick look at which events they are before we dive deeper into details:

UFC becomes the first company to put on with live sports

The UFC is the first company to hold a major live sports event since the world went into a shutdown due to the pandemic.

With rigorous security measures in place, the UFC put on a show in an empty 15,000 seat arena at UFC 249 on 9 May. Staffs and fighters were checked in to sanitized and secured hotels and wore face masks during face-offs, interviews, and scrums.

Since then, the UFC has continued to put on events every weekend. The company has even secured its own island in Abu Dhabi, where they will host its international fights from 11 to 25 July this year.

Some football leagues to resume play this summer

Not long after the UFC’s return, the German Bundesliga completed a full program of matches on the weekend of 16 and 17 May, marking FC Bayern Munich’s eighth title win in a row.

Furthermore, the English Premier League resumed play on the 17 June to wrap up the season. The Premier League has stated that they have necessary safety protocols to continue the season, and keep players and employees protected.

We can’t expect any filled arenas this summer. However, we will get to see 92 games with live television slots, and the games will be held at 10 officially approved stadiums.

And since the EPL continued, it gave Liverpool FC a chance to end their 30-year wait for a title. It’s a Premier League title won in an empty stadium surrounded by empty streets, 200 miles from Anfield. But it’s a title well-earned, bringing some excitement in these weird times.

The Premier League isn’t the only league to resume play this summer, as both Italian Serie A and La Liga are looking to follow suit. However, at this stage, we haven’t been given any exact dates as to when these leagues will be up and running.

Other countries have decided it’s still too dangerous to open up their football leagues. Countries like France, Holland, and Belgium won’t be allowing their leagues to resume this summer, despite having a significantly lower death-toll than the UK.

Major Sports Events in 2021 – is this the return of most sports?

Although some professional European football leagues are eager to get back on track, we’ll still have to bide our patience and wait for most major sports events to resume.

And except for the leagues we’ve mentioned above, it seems we can expect most major sports leagues and events to be back in 2021.

Here are the most recent updates on some of the most popular sports and leagues:

The UEFA Champions League has been put on hold since 11 March due to the COVID-19 outbreak.

However, UEFA recently announced that the UEFA Champions League quarter-finals, semi-finals, and final will be played as a straight knockout tournament in Lisbon, Portugal in August.  The games will be played at Estádio do Sport Lisboa e Benfica, which is also the final tournament venue, and Estádio José Alvalade.

The Olympic Games in Tokyo 2020

Japan was scheduled to organize the Olympic Games in Tokyo this summer, and the event would mark the second time in 57 years that Tokyo hosts the summer edition.

However, due to the COVID-19 outbreak, the games were quickly pushed back till next year. The opening ceremony of the Olympic Games Tokyo 2020 will now be held on the 23 July 2021 instead.

Just like all other sports, the tennis season quickly came to a halt when the corona-outbreak took the world by storm in March 2020.

The pandemic is forcing everyone to take one day at a time, and it’s not unlikely we’ll end up seeing all tennis resumed in 2021. That said, there are still no dates set in stone for next year either.

The season-opening Australian Open Grand Slam is scheduled to take place in Melbourne from 18 to 31 January 2021. And albeit we’re months away from this date, organizers are already preparing for different scenarios that might occur.

In the meantime, we might see the French Open being played this year. And although there are still a lot of doubts as to whether the tournament will kick off, the French Tennis Federation has drawn out a plan of how to organize the event.

However, on their official site, Roland Garros has publicly announced that the tournament will be held between 20 September and 4 October 2020. Only time will tell if we get to see any tennis before next year.

The US Open will be held on its originally scheduled dates of 31 August – 13 September in Flushing Meadows, New York. This is the most recent statement from the organizers:

“First and foremost, our decision-making has been guided by the health and well-being of all who will take part in the 2020 US Open.”

USTA Chairman of the Board and President Patrick Galbraith

However, this 2020 US Open will be played without any fans on site. Instead, the USTA will work hand-in-hand with global broadcast partners to make sure that their fans can virtually experience the excitement and thrill of the games.

Albeit terrifying statistics on corona infections in Florida, the NBA is going to wrap up the season on 30 July at the Walt Disney World Resort, Orlando, Florida. The league will hold its games at the ESPN Wide World of Sports Complex, which is located on the Disney World property.

Starting with two real blockbusters between the Jazz and the Pelicans, and Clippers vs Lakers, the league will continue the competition after a four-month break. The NBA will send everyone into quarantine from 7 July. With a hygiene concept encompassing 113 pages, they will try their best to keep everyone safe.

On the other hand, Florida is becoming a new hotspot with 10,000 new cases in the week prior to publishing this article. 16 players were tested positive, and hotel employees won’t be tested regularly during the tournament.

In China, basketball has resumed just five months after the shutdown. The CBA was suspended on the 24 January, shortly after the coronavirus outbreak in Wuhan.

In Germany, the Basketball Bundesliga (BBL) recently returned after a three-month break playing a three-week tournament with 10 teams at the Audi Dome in Munich.

Players lived in so-called “group quarantine” at hotels that were closed to the public. A maximum of 22 people per team was allowed in this quarantine group, including coaches. Players and coaches also had to undergo regular testing, while all media and technical staff were kept at a bare minimum.

As the easyCredit Bundesliga stated on their website: “Oh, yeah, and all the Covid-19 tests taken have come back negative as the bubble looks like it worked.” This sounds promising for the return of the NBA if everyone adheres to the quarantine rules.

While we’re still waiting to receive definitive updates about some of the world’s most anticipated sporting events, we can make the most out of these challenging times by preparing for the upcoming sporting events.

The COVID-19 pandemic has undoubtedly presented a tough challenge for many sports betting companies, and iGaming companies will be more than eager to resume business and make up for a dire 2020. From a sports betting perspective we can only hope that the return of the NBA and the Champions League might help cover some of the losses.

That’s why planning for the 2021 sporting calendar, and looking into sports betting content localization, makes perfect sense. Make sure you have your content planned out so that you can make an impact once all significant sports are back up and running.

For instance, you might want to start thinking about translation for the 2021 Tokyo Olympic Games, seeing it’s a worldwide event that transcends national borders and is relevant in almost all markets.

The same thing goes for other major sports events in 2021. You can expect competitors to make use of professional iGaming translation to make up for a truly challenging year. Having experienced writers write compelling market copy can make a huge difference in how customers view and engage with your brand.

COVID-19 has had bettors and sports fans starving for sports, and when sports return with a bang in 2021, you can expect your customers to be very eager to play. So, make sure you put sufficient effort and resources into sports betting content localization so that you reach and inspire players in all markets where your brand is present.

How did you like Sebastian Scheplitz’s blog post “10 Creative Sportsbook Marketing Campaign Ideas for Maximum ROI”? Let us know in the comments if you have anything to add, have another content idea for iGaming blog posts, or just want to say “hello.” 🙂