An Overview of the Scandinavian and DACH Gambling Markets 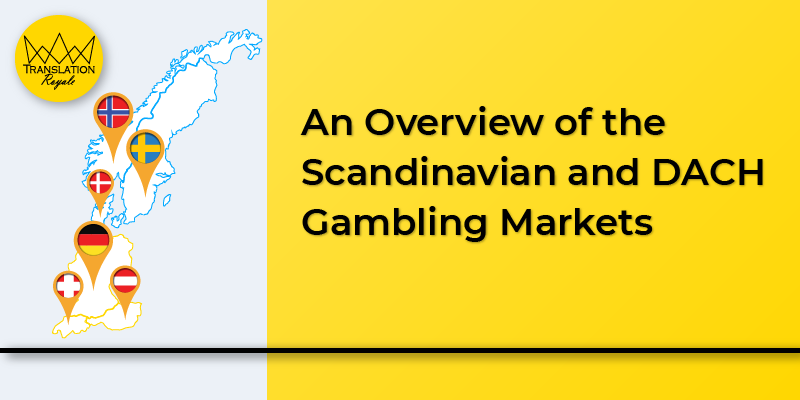 Reading Time: 8 minutes
Author Name: Sebastian Scheplitz The North European markets are widely considered to be amongst the most profitable in the European iGaming business.

The Nordic countries, and Sweden in particular, have been a driving force in the online casino business for decades. Therefore, it’s perhaps not too shocking to see Sweden churning out high-value players.

However, the DACH countries – meaning Austria, Germany, and Switzerland – are catching up and quickly garnering iGaming companies’ attention.

And this video will show you a glimpse of the recent updates on these gambling markets.

There’s a lot to be said about the online gambling business in the Nordic countries.

And it’s certainly safe to say the iGaming business wouldn’t be where it is today if it wasn’t for Swedish innovation and entrepreneurship. Swedish companies were among the first to set up shop in the now prominent gaming jurisdiction Malta.

Back in the early 2000s, when online poker took the world by storm, then newly-founded Swedish iGaming companies were already up and running, and capitalizing on the latest online gaming trends.

Around the same time, Swedish game developer NetEnt burst onto the scene and set a new standard for online slots.

Since then, Swedish newcomers have pushed the boundaries and played an instrumental role in developing adventure casinos with gamification features and world-class live casino games that have taken the gambling experience to an unprecedented level.

And let’s not forget that Swedish payment provider, Trustly, became the first company to bring Instant Banking to the iGaming world.

Like most countries, Sweden has a rich gambling history. However, some of the Swedish companies’ early successes surely have to do with Sweden being a country that’s quick to adapt to online trends and internet usage.

Swedish iGaming companies managed to establish a very lucrative market on home soil. By operating under Maltese gaming licenses, they could bypass the Swedish state monopoly and offer Swedes an unmatched gaming experience online. As long as they followed online gambling laws in the EU, there wouldn’t be any problems.

Online casinos quickly became a widespread phenomenon, and over the past decade, online gambling has become a highly accessible mainstream pastime that’s enjoyed by Swedes from all walks of life.

This is also true for the Swedish sports bettintg market, although online casino is still the most sought-after gaming product.

Research from the Swedish gaming authority, Spelinspektionen, has shown upward trends for online gambling for several consecutive years (link in Swedish). And ever since the first mobile casinos were introduced around 2012, online gambling really kicked off.

This has led to the Swedish government relinquishing the state monopoly and finally letting private gaming companies officially get a share of the Swedish iGaming market, under the condition that all operators must obtain a Swedish gaming license.

This has meant substantial revenue from license fees and tax income for the Swedish government, while iGaming companies have faced new challenges in the new bonus restrictions and advertising policies.

However, Spelinspektionen recently revealed that gambling companies with Swedish gaming licenses generated approximately €2.34 billion last year. And a substantial part of this revenue was produced by the 96 online gaming companies currently licensed in Sweden.

Although not as prominent as Sweden, the neighbouring countries have proven to be reliable Scandivnian iGaming markets too.

What these countries have in common with Sweden is that the standard of living is very high. Subsequently, people earn decent salaries that have the average player spending a substantial amount of money on online casino games and sports betting.

Although similar in many regards, there are notable differences in what games and iGaming products are trending in the Nordic countries. In Sweden and Norway, slots rule supreme, while the Danes have shown an affinity for sports betting.

Denmark relinquished its state monopoly already back in 2010, nine years before Sweden finally decided to make the inevitable giant leap.

Sportsbetting in Denmark is also becoming increasingly digital as the revenue from mobile betting reached 49.7% of the total revenue in 2019, with desktop betting contributed to the remaining 16.7%.

For gambling products, Slots contributed 74% of the total casino revenue in the first quarter of 2020, followed by roulette and blackjack with 9.1% and 7.1% respectively.

Norway is not in the EU and therefore has more autonomy when it comes to enforcing state monopolies and local gambling laws. In other words, Norway doesn’t have to follow online gambling laws in the EU.

Under Norwegian laws, gambling services can only be offered by two companies; state-owned Norsk Tipping and industry-run Norsk Rikstoto. Other commercial operators can only apply for permission to offer limited gambling activities, and will not be eligible for a full gaming license.

Due to this strict gambling monopoly in Noway, authorities are concerned about players turning their heads towards unlicensed operators, which is negatively impacting on problem gambling control measures.

However, the Norwegian government recently made efforts to tighten its grip even more in recent years, as it implemented a new law strengthening the state-monopoly and placing bans on foreign operators in 2016.

Looking at the DACH region, we can see a bright future for iGaming companies.

Germany, for example, has emerged as an up-and-coming market with lucrative prospects in recent years. Just the sheer population size of 83.79 million is already a promising factor for iGaming companies looking to capitalise on new European markets.

The German gambling market is expected to grow from €2.2bn in 2019 to €3.3bn by 2024. Accounting for 42% of gaming revenue are Gaming machines – making them the most profitable segment of the market. Online casino and sports betting markets were the highest across the market in 2019, growing 10.6% and 18.6% respectively compared to 2018.

Similar to the Nordic countries, Germany has announced plans to nationally regulate online casinos and poker starting from 1st July 2021.

This upcoming regulation includes a maximum stake limit of €1 per spin on slots with no autoplay function and no jackpots, a deposit limit of €1000 across all operators, and restriction to advertise about online gambling between 6 am and 9 pm.

This will mean a more transparent and trustworthy market for German players, and the final go-ahead for iGaming companies that are granted a license and adhere to German gambling law.

Unfortunately, this new law will also tighten the rules for advertising and affiliate marketing.

Similar to Norway, Switzerland doesn’t have to adhere to the EU gambling laws as it is not a part of the European Union. The online gambling industry in Switzerland was fully-legalized in 2019, and it is regulated by Eidgenössischen Spielbankenkommission (ESBK).

According to the current gambling act in Switzerland, only land-based casinos can legally operate casino games, and these exclusive rights apply to both land-based and online games.

So far, six casino operators have been granted permission to offer online gambling games, with Grand Casino Baden being the first operator to launch its platform, Jackpots.ch, soon after the new law came into effect in July 2019.

It was reported that Grand Casino Luzern’s MyCasino is accountable for the majority of the revenue, contributing CHF8.9m (€8.3m) of the total CHF23.5m (€22.1m). Up next is Casino Pfäffikon with revenue of CHF6.9m (€6.46m), followed by Grand Casino Baden and Casino Davis with CHF6.3m and CHF1.3m in revenue respectively.

All gambling activities are legal in Austria, and the gambling industry is regulated by the Ministry of Finance – Bundesministerium für Finanzen (BMF), which is also responsible for granting casino licenses.

According to Austria’s 2010 gambling act, the total number of land-based casino licenses increased from 12 to 15. However, since the three new licenses, which were individually granted by BMF in 2014, were later revoked, only 12 licenses that were solely granted to Casinos Austria remain valid.

(Fun fact: With twelve casino branches in Austria, Casino Austria is one of the biggest casino operators in the world!)

On the other hand, the Austrian iGaming market has also seen significant growth in recent years. According to Andreas Kreutzer, of the Kreutzer Fischer & Partner consultancy, online gambling in Austria grew by 11% in 2017 – a year in which overall gaming grew by 4% and generated €1.6 billion.

All in all, the DACH gambling industry is on the rise and a force to be reckoned with.

How DACH differs from Nordic markets

The DACH markets have a lot in common with the Nordic markets. The standard of living is more or less the same, which means that the average player has money to spend.

Just like Scandinavians, many players from this region enjoy slots. However, sports betting has a significantly higher prevalence in these markets, which is perhaps especially true with Germany.

As we have mentioned above, there are distinct differences when it comes to what slots players show an affinity for. For instance, in Sweden, slot trends can vary quite a bit without a single slot ruling supreme. However, in Germany, Play’n GO’s classic Book of Ra has been a massive hit with players. That said, NetEnt games are a common denominator for all North European markets.

Both the Nordic markets and the markets in the DACH region have huge potential. However, going into these markets will be a wasted effort if you don’t tailor your brand and tone accordingly.

If you plan to enter the Scandinavian markets, which are already quite saturated, you certainly need a unique, and at the same time, familiar, tone to stand out, and bring your message across.

For instance, Swedes generally tend to appreciate a very casual and informal tone. Using bombastic language in an attempt to sound professional would thus most likely be a wasted and counterproductive effort.  And If you’re looking to get a foothold in up-and-coming markets like Switzerland, you want to make sure you make a good impression from the get-go.

With more and more countries legalising online gambling, the bar is continuously being raised. Players are expecting reliable products and are drawn to brands that feel exciting and, at the same time, familiar.

By ensuring you speak the local language, and get all the subtle nuances right, your brand will stand a much better chance at competing with other iGaming companies in the industry.

How did you like Sebastian Scheplitz’s blog post “An Overview of the Scandinavian and DACH Gambling Markets”? Let us know in the comments if you have anything to add, have another content idea for iGaming blog posts, or just want to say “hello.” 🙂