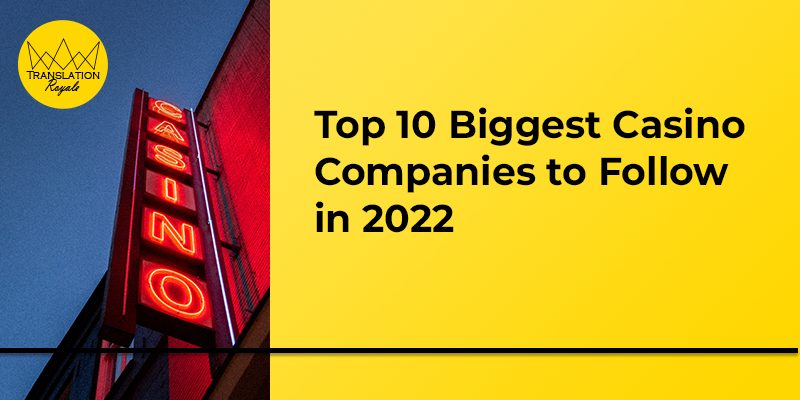 The global casino and online sports betting industry is continuously growing – to the tune of a $231 billion global market capitalization (€234.9 billion) in 2021. An exceptional performance, considering the economic headwinds and challenges the industry has had to confront over the past several years.

And if you’ve followed the business for any amount of time, you will have inevitably heard about the biggest names in the industry, whether as a spectator, player, or professional working in iGaming.

After all, learning who the movers and shakers are in the casino and iGaming space isn’t just merely to stand in awe at the obscene amounts of capital they have in their coffers.

More importantly, casino and iGaming professionals could learn a thing or two from the industry’s juggernauts with regard to how to set up a casino or iGaming firm for long-term success, how to employ growth and marketing strategies, and what they should or shouldn’t do to keep their pulse on the industry.

That said, we’ve put together a list of the 10 biggest casino companies – online and offline – by market capitalization.

We’ll also provide a quick rundown on their financial status and outlook for 2022 and beyond, and identify their keys to success as well as the latest gambling industry updates about them.

DraftKings is a relatively younger company compared to its counterparts on this list, but its youthful dynamism has helped the Boston-based fantasy sports and iGaming operator solidify its hold in the United States market – in no small part due to its online marketing spend and generous offers.

After all, DraftKings spent a fortune in entering the NFT space, with no less than Tiger Woods and the “Great One” Wayne Gretzky serving as their top-tier endorsers.

However, the NFT space was obliterated by the downturn in the cryptocurrency market, making the NASDAQ-listed operator’s greatest strength also its main loss leader, leading to consecutive losing quarters in 2022.

That hasn’t stopped the bullish sentiment DraftKings shareholders have, as evidenced by its increasing share prices – despite the company losing the whole year.

Time will tell whether DraftKings’ overspending on marketing will work – and whether shareholders will continue to support such a top-heavy strategy as the very real threat of recession hangs over the global economy like the Sword of Damocles.

The DraftKings braintrust seems content to keep spending on NFT marketing (one of the emerging online casino marketing strategies) and all that jazz, though.

Française des Jeux (FDJ) has outperformed expectations as the Paris-listed French national lottery operator makes it to #10 on our list of most valuable iGaming companies in the world.

As with many physical iGaming establishments and businesses, the recent pandemic took a massive chunk out of FDJ’s profitability, but lo and behold, FDJ came roaring back with a vengeance once pandemic restrictions were lifted.

This means FDJ outperformed its previous forecasts – and things are looking up for the French iGaming operator in Q4, considering the upcoming FIFA World Cup is just around the corner, as it predicts a 6% increase in company revenues for the second half of the year.

Despite its shrinking share prices and the Goldman Sachs ratings downgrade to “sell” – no small part thanks to the diminishing parity between the euro and the dollar.

FDJ has done exceptionally well to merit a spot on this list, and its performance can be attributed to its strategy focused on digital and point-of-sale channels for long-term, sustainable growth.

Wynn Resorts is synonymous with two gambling hubs: particularly Las Vegas and Macau. And while the former has experienced a post-pandemic rebirth of sorts, the latter is moribund.

Industry insiders predict that Macau will continue to struggle in the next several years – and only if its recovery goes without hitches. And that’s a big IF.

Shareholders are betting on a turnaround, as Wynn head honcho Craig Billings has suggested, but any enthusiasm should be curbed by the Chinese government’s policy on reducing its reliance on the gambling sector in Macau. You can’t fight city hall and expect to win.

Nevertheless, Wynn stock has taken a nosedive from $80 to $58 as of this writing. While Las Vegas may very well hold its end of the bargain in keeping the casino giant afloat, iGaming observers can’t say the same for its Macanese counterpart.

All bets are off if a full-blown recession comes to pass.

Entain stock has fallen considerably in 2022, but the LSE-listed international sports betting and gambling company attributes it to the return of physical, land-based casinos to the fold.

Entain, formerly known as GVC Holdings, was negatively affected by its withdrawal from the Netherlands before the country introduced a new licensing regime and its legalization of online gambling. The tightening restrictions on mortgage affordability in the UK have has definitely not helped its cause.

However, Entain has some positive momentum carrying it towards Q4 2022, as the operator aims to reenter the Dutch market and finalize its completion of Netherlands-based iGaming operator BetCity – just in time for the FIFA World Cup.

Nevada-based Caesars Entertainment – proud owner of the venerable Caesars Palace in Las Vegas among its extensive network of casinos in the United States – enjoyed a resurgence from revenge tourism, but the same can’t be said for investor confidence.

With stock prices currently sitting around $37, Caesars shares have taken a beating – but the revenues indicate that now is a good time to buy the dip, so to speak.

The return of land-based casinos is expected to buoy share prices, while its venture into iGaming and online sports betting is expected to generate an additional revenue stream for the NASDAQ-listed casino company.

Caesars Entertainment built its empire on brick and mortar, but its attempted foray into the iGaming universe may catalyze the firm’s ambitious strategy and propel it toward success.

Like Caesars Entertainment preceding it, MGM Resorts drives its bottom line predominantly through its brick-and-mortar network of casinos in the United States and China, including Macau.

The regulatory and political uncertainty surrounding casino companies with operations in Macau – which has led to a dramatic reduction in revenues for companies like MGM – has largely been mitigated by its physical casinos in Las Vegas.

Our next entry in the top 10 gambling companies of the world isn’t an iGaming or casino operator per se, but rather an Australian gambling machine manufacturer.

Aristocrat is a Sydney-based supplier of gambling machines with offices across the United States, South Africa, and Russia, and the fourth-largest casino company by market capitalization.

Despite Aristocrat’s exponential growth over the past several years, the gambling machine manufacturer took a massive hit by pandemic restrictions. However, like so many gambling suppliers and land-based casinos, Aristocrat is enjoying a resurgence, with its share prices recovering to pre-pandemic levels after taking a beating for the last two years.

Evolution Gaming is a Sweden-based iGaming provider that has performed exceptionally well thus far in 2022, corresponding to the explosion of online live casino gaming.

Evolution recorded a 34% increase in operating revenue, with the Stockholm-based iGaming provider posting a 36% increase in EBITDA in Q2 2022.

It remains to be seen whether Evolution can keep up its frenetic pace of growth as brick-and-mortar casinos open doors once again, but nevertheless, Evolution keeps on delivering every quarter.

Evolution is continuing to make big strides as it continues to grow its online live casino business that has served its bottom line so well, with the opening of new studios in Spain and Armenia and the acquisition of gambling software development company Nolimit City for $340 million (€345 million) in an all-cash deal last August.

Dublin-based online sports betting company Flutter Entertainment, created from the merger of Betfair and Paddy Power in 2016, comes in at #2 in our list of top 10 casino companies – perhaps unsurprisingly considering its position at the head of the table in the United States and the United Kingdom.

As of June 2022, Flutter reported a 20% decrease in EBITDA, as a result of the global economic headwinds, but the Ireland-based bookmaker has managed to navigate through a tricky patch with strategic acquisitions, particularly that of Italy’s leading online gambling operator Sisal – expanding its influence to continental European markets.

Expert observers are bullish on Flutter stock, with the company well-positioned for future growth in major iGaming markets, with its roster of renowned sports betting brands and its growing customer base around the world.

Rounding up our list of the top 10 biggest casino companies is Las Vegas Sands – by far the #1 casino company by market capitalization despite its share prices struggling to rebound to pre-pandemic levels amid a downward trajectory.

Much of the company’s fortunes are linked to its strong presence in Macau and its post-pandemic recovery plan.

However, despite the confidence that LVS has in seeing a spike in the city-state’s tourism levels, the former Portuguese colony faces a long road out of the doldrums it finds itself in. That’s not to mention the aforementioned pivot its leaders are planning to reduce the country’s reliance on the gambling sector.

The real question that remains is whether the casino giant’s shareholders are one with LVS’ confidence in Macau’s recovery and whether they have the patience to weather the oncoming turbulence.

Besides a few movements in the rankings, not much has changed as far as the top 10 biggest casino companies of the world are concerned.

What we see is a good mix of brick-and-mortar and online casinos in the running, but only time will tell whether this arrangement will remain as it is over the next few years.

The stakes are high for the top 10 mainstays Wynn, MGM Resorts, and Las Vegas Sands, and they’re all betting on Macau – if the former Portuguese colony recovers and retakes its position as Asia’s primary hub for gambling, we can expect the king to keep his crown; otherwise, we might see a couple of new faces at the top.

How did you like May Thawdar Oo’s blog post “Top 10 Biggest Casino Companies to Follow in 2022”? Let us know in the comments if you have anything to add, have another content idea for iGaming blog posts, or just want to say “hello.” 🙂