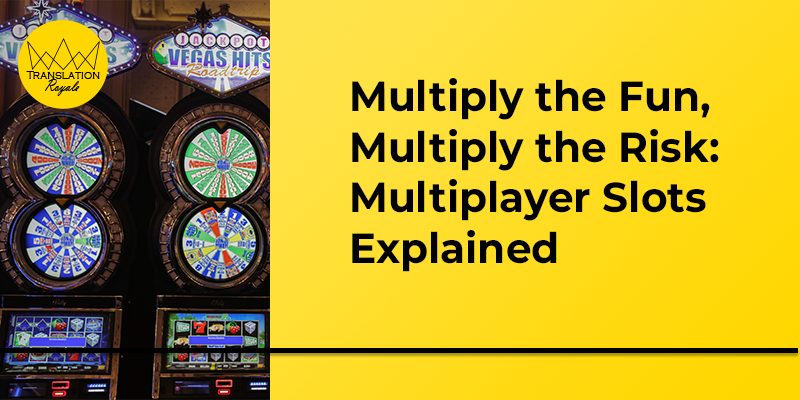 2015 was an eventful year; China shelved its one-child policy, Millenials surpassed boomers as the largest demographic, same-sex marriage became legal in the US, and perhaps most dramatically – multiplayer slots vanished from online casinos overnight.

What Are Multiplayer Slots?

Also known as a community video slot, multiplayer slots are games where – as you’ve no doubt twigged – up to six players battle it out together against the RNG (random number generator) working overtime.

Typically multiplayer slots are initially played as a regular slot – player vs. RNG. The multiplayer element comes into play when you enter bonus rounds with your fellow players.

Loaded with a leaderboard to display each player’s winnings and the number of spins, if one of the multiplayer slot users hit a bonus round, the whole team would be invited to participate, jackpots included.

Demoted to a slot junk heap, will these slots rise like an iGaming phoenix from the ashes? It’s time to find out.

How Do Multiplayer Slots Work?

Multiplayer slots, aka community slots, work much like their one-on-RNG video slot counterparts. The higher your bet level – as with traditional slots – the higher your chance of taking down some tasty wins with some payouts reaching the low seven-figure range.

Neither competition nor tournament, community slot games focus on teaming up with your co-spinners to take down the main prize.

Teamwork makes the dream work, as they say.

Oh and, if you are looking to brush up on your slots-related lingo, we have a beginner-friendly guide to slot machine slang and terminology, just for you!

While you’d be hard pushed to find a legitimate multiplayer slot these days, back in 2015, these were big business (almost too much so).

Here are some of the most entertaining, cutting-edge, and darn right most fun you can have when playing multiplayer slots. Let’s take a look.

It’s worth noting that the following titles were originally multiplayer titles but have now been relegated to regular slot outings, that is, a single-player facing off against the RNG.

Less a house of fun and more a house of horror, this spooky outing from Betsoft was a multiplayer hit as soon as it hit online casino shelves.

With a nightmarish character design that would no doubt induce night terrors and a potential emotional breakdown, here’s a hardcore horror-themed slot that’s as creepy as it is innovative.

Egypt-themed slots are a bankable motif for slot producers, so a multiplayer online slot with a pyramid sheen was to be a sure-fire hit with the social gambling cohort.

Played across five reels and a total of paylines, the Isis character herself serves as wild with the hawk symbol triggering the free spins round.

While perhaps over-promising on the title, this stripped-back slot was a smash hit among the heap of multiplayer slot machines.

Going for the classic fruity mechanic – the type you’d find down the pub – Wheel of Wealth was an ideal outing for players taking their first few tentative steps into the world of multiplayer slot games.

. Microgaming for an Antipodean-themed slot, and probably the first and last of its kind, mainly due to the ever-shifting nature of online gambling regulation native to the Asia-pacific isle.

Releasing No Worries was always a bit of a gamble for Microgaming. Not only dealing with a super-niche player demographic slot but also incorporating the Multiplayer mechanic was always going to be a release headache.

While critical reception was negative, No Worries Multiplayer stood its ground as a ground-breaking title.

The Popularity of Multiplayer Slots Explained

As the adage goes: “It’s easy to leave a site but harder to leave a community.” While the online gambling community is abuzz across iGaming forums, in-game communities are harder to form.

The closest equivalent we have today in social casino form is live casino, where players can have a bit of back and forth while enjoying real-time, humanized gaming.

Online gambling is a largely solitary affair with just your browser window or smartphone screen as your single companion. It can get pretty lonely out there.

Multiplayer slots brought players together with a common aim of beating the house – a David versus Goliath style match-up that created waves across the social slot world.

The controversy surrounding multiplayer slots could be down to operators wising up to concerns relating to transferring funds between players, opening the doors for illicit transactions that could have money laundering ramifications.

This would have online casino’s due diligence having to work overtime to complete a near-impossible task of tracking funds through these games, the rate of which would require a computing capacity comparable to Stephen Hawking’s brain.

In the poker world, this is called chip dumping, a form of gambling collusion, whereby funds are transferred between players, often in the thousands. This is a massive headache for due diligence departments and –  as mentioned – near impossible to follow the financial breadcrumbs to their original source(s).

It seems for once that casinos were one step ahead of the UKGC on multiplayer slots and pulled them from their sites before they were faced with a potentially hefty fine to fill the UK Casino Police’s coffer.

This raises the question as to whether – as operators were aware of money laundering failings – this should have been reported to the UKGC.

The sloth-challenging response from the UKGC was possibly because of their own inability to audit multiplayer slots effectively. Here’s one of the few times that an operator took the lead and responsibility of pulling a series of games that could have serious monetary complications.

Or maybe it was because…

Multiplayer Slots Are Just No Fun

Assessing the most popular three online casino forums for comments on multiplayer slots, it’s evident that, in fact, the multiplier mechanic was flawed and gameplay less than desirable.

Awash with negative comments, with the occasional rant of the RNG being rigged a permanent fixture of casino forum comments, it wasn’t looking good for multiplayer slots from a player’s perspective.

The exception was Isis Multiplayer, which, according to one forum, was as packed with players as an overachieving sardine tin.

The Future of Multiplayer Slots

Multiplayer slots are a headache for both operators and providers. Without solid player management payment tracking in place, it’s unlikely that multiplayer slots will be raising their 5×3 heads any time soon.

Online gambling rules and regulations in regards to payments and fraud are not – as supposed – so technically advanced to track player data with multiplayer slots.

The ideal would be the UKGC and slot producers working in unison to effectively track funds originating from multiple sources and using said data to create the next generation of multiplayer slots.

Regulation faced by casino operators is already brain-blowing confusing. As the UKGC are commonly known as gaming party-poopers within the industry and commonly viewed as the enemy of online gaming fun, perhaps it’s time for closer partnerships between operators and regulators to be performed.

The current ‘us versus them’ mentality in international iGaming markets in relation to regulators needs to change. And change fast.

With the correct payment tracking in place, more developed gameplay, and transparency between operators and regulators, the question is: Will multiplayer slots experience a major comeback?

Well, we certainly hope so.

How did you like May Thawdar Oo’s blog post “Multiply the Fun, Multiply the Risk: Multiplayer Slots Explained”? Let us know in the comments if you have anything to add, have another content idea for iGaming blog posts, or just want to say “hello.” 🙂