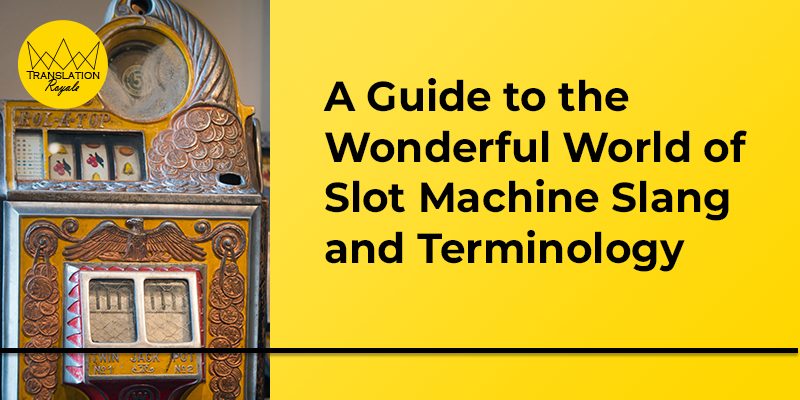 The timeless appeal of slot machines has drawn many a new gambler to the table since Bavarian-born American inventor Charles August Fey first invented the “Liberty Bell” – the first-ever slot machine – in 1894.

The rest, as the cliché goes, is history.

Since then, slot machines have taken the gambling world by storm – and in today’s day and age of online casinos, slots have never been as popular as they are now.

And whether you’re a longtime fan, a new player, an aspiring content writer, or an established iGaming content manager, understanding basic slots terminology – the often daunting slang that comes with the territory – is essential for your enjoyment and success.

But don’t worry, we’re here to guide you through it.

As you can see, you can’t experience the same thrill as a player and the community around the game without fundamental knowledge of basic slots terminology, nor can you expect to be taken seriously as an iGaming writer or marketer without having nary a clue about slot machine terms.

At the same time, iGaming translation and localization professionals need to know the definitions of universally recognized and most common slot terms to nail the most appropriate word in the target language – and likewise use them when the direct translation isn’t available in the said target language.

The exponential growth in popularity slot machines are enjoying – as well as the jargon surrounding them – means there is always something new for everyone to learn.

Whether you’ve just begun on your slots journey or are a grizzled veteran of the one-armed bandits, you’ll never feel out of place wherever you play with our glossary of slots terms featuring side-by-side explanations.

A slot game that has a three-reel format in addition to three rows of symbols that spin each time you press the start button. Reels are where the symbols are placed on.

A slot game with five reels and either three or four rows of symbols. See 3-reel slots.

Refers to the winning payline currently active and in play, which results in a payout if it hits a winning combination. Slot machines featuring multiple paylines enable players to choose how many active paylines they wish to play with on each spin.

A common feature that allows players to automatically set the number of spins within a session without having to press the start button every time.

Betting units refer to the units wagered used to place bets determined by the denomination of the slot machine. Also referred to as “credits.”

Big Bertha refers to the massive, eye-catching slot games with multiple reels you would find near the entrance of brick-and-mortar casinos designed to draw attention.

More and more slot games offer bonus features that can be set off randomly or based on a particular combination of symbols. Bonus features such as free spins, wilds, and scatters add excitement to the game and offer different ways to win.

Slot games based on classic movies, current TV shows, or musicians and bands with features, animations, music, and graphics based on them.

An exciting feature where symbols on a winning line disappear, consequently displaying replacement symbols that may create another winning line within the same spin. Slot games featuring cascading reels offer more than just one payline. Also referred to as avalanche slots or tumbling reels.

A traditional slot game that features three reels and a single payline.

A special type of wild that covers the entire reel when it appears on the screen for bigger chances to win. See wild symbol.

Additional spin offered as a bonus feature on bonus slot machines. Free spins may be awarded by hitting a particular combination or as a casino reward.

A slot machine featuring fruit symbols or a theme based on fruit. The term was coined by Brits when slot machines were first introduced in the United Kingdom, all of which contained fruit symbols.

Refers to the frequency at which a slot game pays out on average.

Slot games that pay out frequently at a given time frame are called “hot” slots. If a slot game hasn’t paid out in a while, it is called a “cold slot.” May also be referred to as loose slots or tight slots, respectively.

The highest amount of winnings or the top prize a particular slot machine can pay out at any given time.

Classic slot machines that feature physical rather than video reels.

Multipliers are often represented as a symbol multiplying the payout from any winning combination it appears in. They can also be applied to free spins or awarded in bonus features.

Slot games optimized for mobile devices for players on the go.

A slang term referring to slot machines that has been around since its early days.

Refers to slot lines where winning combinations must land to constitute a win.

A table explaining the prizes you can win for hitting a variety of symbol combinations or potential bonus rounds.

Slot machines that feature a jackpot that progressively grows until a lucky player hits it and wins.

Refers to a percentage demonstrating how much the slot pays back. For instance, an RTP of 97% means a player would get $97 for every $100 wager.

A spin button or lever that activates the spin to begin the slot game.

Refers to graphics or pictures on slot reels. They may include fruits like cherries and lemons, dollar/euro/pound signs, or sevens, among many others. Depending on the machine’s theme, they may also include symbols of famous movie or video game characters.

Refers to an electromechanical failsafe switch that can detect whenever a slot is suspected of being tampered with or experiencing operational issues. Tilts trigger an alarm whenever tampering is detected.

A symbol that can be substituted for other symbols to create a winning combination.

Refers to lines that can appear on multi-line slot games, often in a zig-zag pattern, hence the name.

How did you like Sebastian Scheplitz’s blog post “A Guide to the Wonderful World of Slot Machine Slang and Terminology”? Let us know in the comments if you have anything to add, have another content idea for iGaming blog posts, or just want to say “hello.” 🙂