A Brief 21st Century History of the UEFA Euro Championships 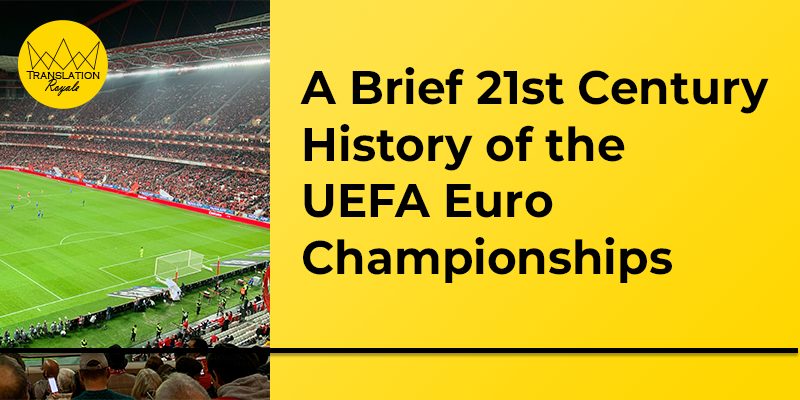 Euro 2020 marked 60 years since the establishment of the UEFA European Championship, which is now regarded as one of the most preeminent international tournaments on the continent.

Later, this has been graced by some of the sport’s most beloved icons and legendary teams of all time – not to mention playing host to the greatest games of all time.

The fact that only 10 countries can lay claim over being the undisputed Kings of Europe since its flagship edition in 1960 is a testament to the lofty status of the tournament: with Germany, Spain, France, and most recently, Italy lifting the coveted Henri Delaunay Trophy more than once.

Here in this video, we have summarized all the stories of the past UEFA champions, so you can get an overview of the topic before we dive deep into it.

A Short History of the UEFA European Championship

The idea of a pan-European football tournament has been around since 1927 when it was proposed by Henri Delaunay – the former French Football Federation bigwig who went on to become the first General Secretary of UEFA.

However, Delaunay passed away by the time his vision came to fruition in 1960, when it was then known as the European Nations’ Cup. Therefore, the winner’s trophy was named after him.

The inaugural Euros featured four teams, which then expanded to eight teams in 1980 and then further expanded to 16 teams. The Euros have since expanded to a 24-team format in 2016, and qualification takes place a couple of years before the final tournament itself.

That’s where participating UEFA members duke it out among themselves to win a seat to the big dance – of course excluding the host(s), which automatically gain a seat.

Here, Translation Royale takes a look back at every single Euro of the 21st century, from Euro 2000 in France to the recently-concluded Euro 2020, which was staged all over Europe – under the specter of the pandemic while remembering each team that won it all.

Held across Belgium and the Netherlands, Euro 2000 featured arguably one of the greatest Les Bleus teams ever assembled, helping France follow up their 1998 World Cup triumph with a European championship to boot.

Featuring attackers such as the incomparable Zinedine Zidane, a young Thierry Henry, Sylvain Wiltord, and David Trezeguet, plus a back four of Laurent Blanc, Marcel Desailly, Lilian Thuram, and Bixente Lizarazu, the reigning champions would be the favorites coming into the final.

But the Azzurri didn’t have ham-and-eggers either, with the legendary Paolo Maldini captaining a squad featuring Filippo Inzaghi, Alessandro Del Piero, and an emerging Francesco Totti, to name a few.

The final saw Roma legend Marco Delvecchio drawing first blood early in the second half, with the Azzurri tightening up the noose on Les Bleus until the dying seconds of stoppages. That was when Arsenal stalwart Wiltord came in as a substitute to score the equalizer. David Trezeguet scored the golden goal for all the marbles to wrap up the double for Roger Lemerre’s side in extra time.

💡 Fun Fact: While Zidane took home the Player of the Tournament, it was defensive midfielder Didier Deschamps who captained Les Bleus to the double. Retiring shortly thereafter, Deschamps returned to manage the French national team in 2012.​

2004: Greece Shocks the World Against All Odds

The Euro stage is no stranger to shock, but there is possibly nothing greater than what Euro 2004 had to offer: the Greek national football team overcoming 150 to 1 odds to win the whole shebang.

And yet, with one scrappy Angelos Charisteas header connecting from a well-placed Angelos Basinas corner, the Ethniki etched themselves into the realm of the immortals en route to defeating hosts Portugal 0-1 in a blood-and-guts, tooth-and-nail kind of final.

Otto Rehhagel’s well-drilled Galanolefki resolutely held off a star-studded Seleção managed by decorated skipper Luiz Felipe Scolari, en route to becoming one of only 10 national teams to win the tournament since its inception. No underdog story has come close since.

💡 Fun Fact: The Ethniki won all their knockout games at the tournament with identical, binary 1-0 victories. Talk about a team José Mourinho would have loved to manage.

Euro 2008 could be considered the coming-out party of La Roja and their vaunted tiki-taka system, marking the second time Spain won the tournament.

Luis Aragonés’ Spain squad was in a scintillating form throughout the tournament, notching victories against Russia, Sweden, Greece, Italy. Moreover, a rematch with Russia led to an ultimate showdown with Jogi Löw’s Mannschaft at the Ernst-Happel-Stadion in Vienna.

In this tight affair, Spanish striker Fernando Torres scored the only goal in a 1-0 victory that belied a dominant performance from La Furia Roja. Spain put up the talents of David Villa, Andrés Iniesta, Xavi, and Torres against the likes of Germany’s Miroslav Klose, Michael Ballack, Bastian Schweinsteiger, and Lukas Podolski.

Before this showing, La Roja were largely underachievers on the world stage. Spain’s 2008 victory marked the beginning of their dominance on the international stage for the next four years, culminating with winning the World Cup in 2010.

Entering Euro 2012, some quarters felt that La Roja was getting past its sell-by date, no thanks to their dire, claustrophobic showing on the way to the final – not to mention an offence that was getting predictable by the day.

Nevertheless, the defending champions gamely marched on, pacing themselves while beating Croatia, France, and Portugal. The Spaniards booked their place in the final with a resurgent Azzurri helmed by the mercurial Mario Balotelli and Antonio Cassano. The Italians got to the final by outperforming the Three Lions and Die Mannschaft to get to the final.

La Furia Roja proved their critics wrong yet again en route to a 4-0 shellacking of Italy, which represents the largest margin of victory in a Euro final. Goals from Manchester City magician David Silva and Barça mainstay Jordi Alba had the Spaniards leading 2-0 at the half, while Fernando Torres and Juan Mata put on their shooting boots to put the result beyond a shadow of a doubt. A fitting end to one of the greatest dynasties of the era.

💡 Fun Fact: The only nation to have successfully defended its championship was Spain, winning back-to-back Euro championships in 2008 and 2012 — and the 2010 World Cup to boot. Dominating.

The 15th edition of the UEFA European Championship was a foregone conclusion to more than a few pundits: mainly that it was all a coronation ceremony for host country France. And why not?

They had the undoubted advantage of playing in front of their own crowds, boasted a stacked squad, and played some dominant football throughout the competition.

The stage was set for a date with Fernando Santos’ dour Portugal side who had played uninspiring-yet-effective football, drawing all three group matches. With their superb penalty-taking skills and airtight defense, Portugal knocked Switzerland and Poland out on penalties before finally putting it all together for a comprehensive 2-0 victory over a red-hot Wales.

And, when talismanic Seleção forward and all-time great Cristiano Ronaldo was forced off with an injury after the 25th minute, all bets were off: it’s all just a matter of time until Les Bleus would be crowned European champions for the third time.

But the Seleção had other ideas. With CR7 rallying the troops from the touchline, Portugal responded with the defensive performance of a lifetime. Les Bleus gamely tried to find the winning goal, but the sterling defense of the Seleção persevered.

The vaunted Les Tricolores capitulated after the Portuguese squad broke the deadlock through a dramatic long-range screamer from Lille striker Éder in the dying minutes of extra time.

The narrative changed from the uncertainty of Euro 2020 even happening in a time of the pandemic, actually making it the Euro 2021 in the end, towards being overrun by the bullish hype as the Three Lions and Harry Kane sought to end 55 years of heartbreak for the English.

Football’s coming home. William Hill had England at +210 win Euro 2020 outright just before the quarterfinals as the odds-on favorite to bring home the bacon. Italy was no slouch; the odds were pegged at +400, just behind Spain, which were at +300.

And it seemed so barely a couple of minutes into the match when Manchester United left-back Luke Shaw scored the opener to open his account for Euro 2020 to a rapturous ovation from the Wembley crowd.

The Azzurri seemed to have no answers forthcoming until Juventus stalwart Leonardo Bonucci levelled the match after 67 minutes to hold on to a 1-1 draw after extra time.

Euro 2020 marked the first time a final was decided on penalties since Czechoslovakia’s Antonin Panenka introduced the world to, well, the Panenka penalty – the same one that decided the 1976 final – and downed Franz Beckenbauer’s West Germany in a cold night in Belgrade.

💡 Fun Fact: Euro 2020 was a treat for football fans all over the world, racking up the highest goal average since 1976 – well before the implementation of the qualifying group stage. Furthermore, Euro 2020 was played in eleven countries at eleven stadiums – the first time in history it shared hostship.

The DFB-Elf will no doubt be one of the favorites to capture the Henri Delaunay Trophy, being offered as 9/2 favorites to win the competition outright (with Betway the sole bookie offering prices at this time of writing.) Other popular UEFA Euros betting options such as totals, handicaps, and props are yet to be published.

💡 Fun Fact: It would be the third time that European Championship matches are played on German territory; however, it would be the first time the competition is held in former East Germany with Leipzig as a host city.

How did you like Sebastian Scheplitz’s blog post “A Brief 21st Century History of the UEFA Euro Championships”? Let us know in the comments if you have anything to add, have another content idea for iGaming blog posts, or just want to say “hello.” 🙂