The Best Paddy-Powered Publicity Stunts Ever 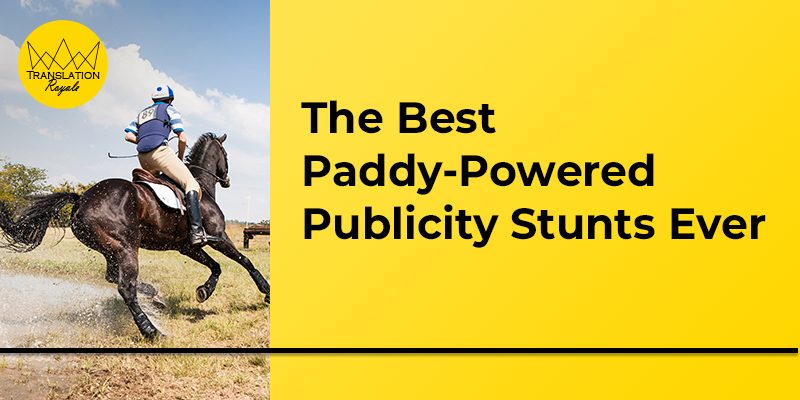 Over a four-year period, Paddy Power Betfair appeared in 8.01% of all gambling-related internet searches carried out by UK players during December 2015 and January 2019.

Ranking ahead of other iGaming heavyweights, Paddy Power Betfair was ahead in the search results game.

Well-known for their light-hearted and cheeky promotional campaigns – Paddy Power Betfair has been amusing both fans of online gambling and pretty much anyone with even a hint of a sense of humor for years.

In this article, we’ll be taking a look at the most outrageous, hilarious, and unforgettable best Paddy Power marketing campaigns.

And here in this video, we’ve showcased some of the best Paddy Power marketing stunts as a teaser. Enjoy!

Hailing from the isle of emeralds, world-famous stout, and the oft-teased stereotypes of little chaps looking for their lucky charms, Paddy Power was born in 1988.

Paddy Power has its roots in the land-based bookmaking world and is the product of a merger of three high street bookmakers: Stewart Kenny, David Power, and John Corcoran.

Boasting over 13 million players worldwide, Paddy Power Betfair is now one of the biggest bookmakers in the world. Famous for accepting controversial bets that include the extinction of polar bears in 2011, the (more than slightly morbid) assassination of Brack Obama in 2008, and opening a book on the first species to be wiped out by the deepwater horizon spill.

From such a divisive online sportsbook and casino, you can only expect a controversial and inventive marketing strategy. And here are some of Paddy Power Betfair’s finest publicity stunts ever.

One Paddy Power marketing strategy that seems to hit the sweet spot every time is teasing their Brexit-bashed neighbor, The UK, and, specifically, that tiny part of it called England.

Receiving complaints of being ’racist,’ ‘anti-English,’ and ‘offensive,’ this particular campaign focussed on the 800 years of historic British rule over Ireland.

The copy in question light-heartedly stated: “Dear England, sorry for the last two years of pain, suffering, and humiliation. Another 798 years and we’ll be even. Paddy Power.” The campaign was intended to fuel excitement for the 2019 Six Nations Rugby Championships.

From Sinner to Winner

Set in the largest private park in Europe, Paddy Power drew inspiration for one of the best sportsbook campaign ideas ever. While some might find Catholicism and sports betting unlikely bedfellows, Paddy Power embraced the concept.

In reaction to falling confession rates ahead of Pope Francis’ visit in August 2019, the Irish gambling powerhouse erected a 13-meter-wide x 12m high x 26m deep confession box. The main difference between this confession box to that found in a church? This is a drive-thru confession – ideal for wrongdoing motorists.

“Ireland has changed a lot since the last Pope’s visit – gay marriage is legal, we’ve repealed the Eighth Amendment, and even secretly cheered for England in the World Cup,” a Paddy Power spokesperson said. “With decades worth of sins clocked up since then, we’re providing a convenient means to complete your contrition with your keys still in the ignition.”

Leading up to the 2014 world cup based in Brazil, the #SHAVETHERAINFOREST campaign was one of Paddy Power’s most audacious and hilarious to date.

This campaign simultaneously highlighted the plight of the diminishing Brazilian rainforest while lampooning England’s heroic yet futile attempts at winning the world cup since 1966.

The more software-savvy among us could easily see that this was clearly the work of some Photoshop jiggery-pokery. Yet, huge numbers complained about Paddy Power’s supposed destruction of this South American ecosystem.

Just to set the record straight: no trees were harmed in the making of this publicity stunt.

Costa: We Won’t Shit in your Coffee

Costa, who had been suffering from a less-than-desirable health and safety report in 2017, was the victim of a classic Paddy Power prank. A BBC investigation discovered that “off the scale” traces of fecal matter.

Whatever you think of Costa coffee, Paddy Power’s opinion has been well and truly voiced.

As far as baby showers go, Paddy Power’s take on the birth of baby Prince George at St. Mary’s Hospital, London is a cracker.

Paddy Power sent three men-babies dressed in green onesies down to the hospital, complete with a chalkboard presenting odds for the newly arrived monarch’s hair color.  Brown was the favorite with ginger having odds of 4/1.

The oversized infants were also offering odds on the Prince’s name after research showed that a sixth of all internet searches relating to the royal’s birth was “royal baby odds.”

Gambling, plus the monarchy? Two of Britain’s most favorite things. One of the many truly inspired paddy power marketing strategies to this day.

In honor of Donald Trump’s 2016 visit to the land of golf and whisky, aka Scotland, Paddy Power sent a troupe of wandering Mexican mariachi players to greet him as he descended from Air Force One.

The mariachi players were armed with a wheelbarrow of bricks in the hope of contributing to much-needed material for Trump’s wall. And the band’s name, naturally – Juan Direction.

While close to 50% of the UK’s voting population was dismayed at the Brexit result, good old Paddy Power saw this as a great opportunity to poke some fun at this soon-to-be self-ousted EU nation.

Picture this: French footballing legend and EU member Eric Cantona is managing an offshore location somewhere in the British channel, created as a safe haven for members of the British public to ride out Brexit.

Eric Cantona’s requisition of an old sea fort serves as a modern version of Noah’s Ark, where Brits are invited to enter two by two. Luckily, through a mixture of guilt and a touch of humor, their British neighbors took it on the chin.

Often touted as the mischief-makers of the gambling world, Paddy Power really outdid themselves at one of the biggest horse racing fixtures in the sporting calendar.

The marketing mavericks at Paddy Power offered punters ‘the best seat in the house,’ which is a Paddy Power hot air balloon shaped like a massive, aeronautical pair of Y-fronts.

The prominent and inflatable viewing unit measured at 63 ft. high and 60 ft. wide. It holds the capacity of 115,000 cubic feet of air and took a crack (craic) team of specialists over six months to create this over-the-top floating underwear.

“We couldn’t resist inviting punters to get into our pants at Cheltenham this year – so we needed a pair of epic proportions! Our flying y-fronts provide an unrivaled view of the action for punters, as well as hopefully giving anyone in the grandstand a sight to remember and a bit of Irish luck,” is what Paddy Power’s spokesman had to say about the matter.

Well, it could have been worse. At least the hot air balloon was going commando.

Back in 2014, a punter who went by the name of ‘Tony’ was vilified for his bet against England’s first loss to Italy.

A seemingly innocuous betting market would have most probably gone unnoticed had Toby not decided to take to Twitter to boast about his unpatriotic bet.

Hanging from a medieval contraption known as ‘gibbet,’ traditionally reserved for traitors, murders, and highwaymen, Tony was – quite literally – hung out to dry by Paddy Power.

While most online operators are trying to come up with the next best content marketing ideas for sportsbooks – Paddy Power is once again on another level.

All in good jest – Paddy Power added that anyone with the gall to bet against Britain versus Paraguay would receive exactly the same treatment. Ideal for someone who wants to tick being put in a gibbet off of their bucket list, less so for everyone else.

Carved into the ancient hills of Uffington, Oxfordshire stands one of Britain’s finest examples of Anglo-Saxon hill carvings ever.

A sacred sight and source of immense provide for locals was the perfect target for some light-hearted Paddy Power tomfoolery.

And before you ask – no ancient chalk hill carvings were damaged in the making of this genius marketing prank.

Careful not to damage the structure, Paddy Power sparked controversy, a few furrowed brows but mainly chuckled at this innovative and cheeky publicity stunt in the run-up to the 2012 Cheltenham festival.

When Betfair wasn’t part of Paddy Power Betfair or Flutter Entertainment for that matter, yet, Translation Royale’s CEO Sebastian Scheplitz worked on a Guinness Book of World Records campaign for the sportsbook brand back in 2008.

Local farmers of Vienna planted a billboard to be seen from the sky when flying into Austria’s capital to watch matches of the EURO 2008.

It measured 1,380m by 316m and covered an area of more than 50 football pitches. It showed the Betfair logo alongside the message: “No.1 for football and still growing!”

To put this into perspective, its length was equivalent to laying the Empire State Building end-on-end three times, while the 436,000sqm it covered was 62 times larger than London’s Trafalgar Square. This was a true world record campaign.

While most online operators are happy to draw players in with meager free spin offers, weak branding, and less-than-generous deposit offers, Paddy Power Betfair is creating marketing content that is hilarious – but most importantly – shareable.

Paddy Power Betfair partners with some of the biggest names in the agency world, their campaigns, while being off-the-wall, are never overly offensive and are good-natured at heart. An online casino that cares and makes you laugh. What’s not to love?

How did you like Sebastian Scheplitz’s blog post “The Best Paddy-Powered Publicity Stunts Ever”? Let us know in the comments if you have anything to add, have another content idea for iGaming blog posts, or just want to say “hello.” 🙂