The 12 Biggest Casino Wins of All Time 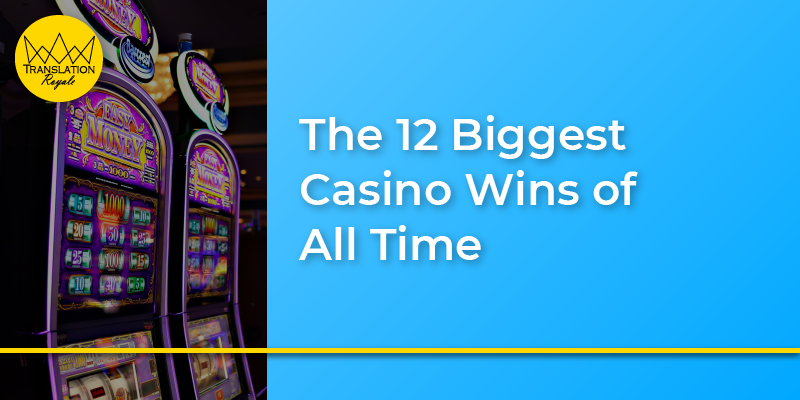 Sometimes, the thrill of gambling is just irresistible. Whether you are a strategic genius or testing out your pure luck, the thought of becoming a multi-dollar millionaire is very heart-fluttering. Chances are extremely rare, but some people did become multi-millionaires whether it is over a jackpot spin or after a decade-long wait. Without further ado, we present you the 12 biggest casino wins in history with snippets of their stories:

In 2011, a 20-year-old Norwegian online gambler by the name Peter won a total of €11.7 million by playing a progressive jackpot slot. It is a fruit slots machine called Arabian Knights, operated by Betsson online casino and guess what its slogan says? “Anything can happen.”

Don Jonson is a blackjack master and he has his own gambling tactics up his sleeve. Unlike other players who count cards or use tricks, he negotiates special rules with dealers and casinos in a way that it would give him higher chances of winning.

Luckily for Don, some casinos even offered high-rollers like him guaranteed 10% paybacks but he managed to get 20% paybacks with the right to bet up to $25,000 a hand. Because of his skillful negotiations and techniques, Don earned a total of $15.1 million from 3 casinos in just 6 months.

Unlike the current anonymous world-record breaker, John appeared in several news articles and interviews in which he happily shared his experience of winning an astonishing amount of € 17.8 million. If you are curious about his life-changing experience, check out this interview of John by Betway casino in which he claimed to have given away 4 million to one of his friends.

With the iGaming trend on a rise, it is only fair to talk about the biggest payout for online gambling to date. On 28th September 2018, an anonymous player broke the world record of “the largest jackpot payout in an online slot machine game” by playing Mega Moolah Jackpot at Grand Mondial Online Casino. This lucky person became a multi-millionaire by winning €18,915,872.81 in total with just a 75 cent bet from a mobile phone and less than 50 spins.

It is the largest Mega Moolah win to date, surpassing the previous world record set by John Heywood with his £13.2 million cash prize in 2015.

This list will not be complete without Elmer Sherwin, a World War II veteran who became the double million-jackpot winner. It was in 1989 when Elmer won his first jackpot of $4.6 million. This all happened at the Mirage, Las Vegas – just 10 hours after it was opened to the public. He traveled around the world and continued playing slots occasionally with the hope of hitting the jackpot again.

Well, he wasn’t wrong at all. Sixteen years after his first win, his luck shot up again and ended up winning another $21.14 million. He was 92 years old at that time, and the odds of winning that game was at one in fifty million.

Is “perseverance” really the moral of this story? To stop or not to stop is the real question here and the answer is going to be very subjective.

In June 1999, an anonymous man from Illinois also won over 21 million from Megabucks Machine at Caesars Palace with just $10 deposit. It seems like Johanna is not the only person to become a Megabucks Millionaire in one shot.

Johanna Heundl wouldn’t have thought that she would become a millionaire when she took a breakfast trip down to Bally’s. She decided to play Megabucks for the first time and put in about $170 (that’s quite a big sum for a first-timer, don’t you think?. To her surprise, she won $22,618,156.67 after just ONE spin! Sometimes, the best decisions are often better than spontaneous ones.

Another Megabucks triumph was declared by a 67-year-old retired flight attendant in the Palace Station Hotel, Las Vegas. Her initial plan was to spend just $100 at the Megabucks Slot Machine, but she ended up spending $300 and of course won back more than $27 million. She also won $680 grand from the Wheel of Fortune a few months before this million-dollar-win. This is one lucky lady indeed!

Cynthia Jay’s story is a fairy tale-turned-misery. During her mum-in-laws birthday party, she decided to play at the Megabucks Slot Machine. Just on the 9th try, she won $34.95 million, which is the biggest Megabucks Jackpot in history at that time. Cynthia happily quitted her job, married the love of her life, and decided to travel around the world.

Unfortunately, her fate took a twisted turn. A few weeks after her major win, Cynthia got into a car accident which killed her beloved sister and made her paralyzed from the chest below. Life is very unpredictable, and anything could happen even if you are in the best of luck.

It is always entertaining to read the stories of how some people win their casino games easily and this story is one of them. While waiting for a basketball game, this unknown 25-year-old man walked into Excalibur casino to kill some time. All he did was play the video slots with $100 deposit just to win back almost $40 million casually. The odds were 1 in 16.7 million at that time, and this anonymous winner decided to take out $1.5 million every year for the next 25 years.

If you are wondering how to waste some time before your favorite game, this might be the answer!

Archie Karas, one of the finest high-stake gamblers in the world, is also famous for his $50 – $40 million legendary story.

In December 1992, Archie had just lost $2 million in an LA poker game and left to Las Vegas with only $50 in his hands. This, of course, did not stop him at all from gambling. Luckily, he ran into a friend in Binion’s Horseshoe casino and borrowed $10,000 to play high-stakes Razz. He kept winning one game after another and at the end of the day, he already had $17 million in his pocket and paid back his $10,000 debt with a 50% interest within just 3 hours. His winning streak astonishingly lasted for the next 3 years, during which he won $40 million.

However, this story did not finish with a happy ending. He started running out of luck and dropped one-fourth of the money in craps in just 3 weeks, $17 million in a baccarat game and another $2 million at poker. After several rounds of losing and winning, Archie eventually lost the rest of the money and was even banned from all Nevada and Las Vegas casinos for life.

Archie might have run out of his luck, but the stories about his winning streaks are here to stay.

In May 2013, the highest single winning record of the Powerball lottery was set by Gloria McKenzie. Topping the list of the biggest casino wins of all time with a hefty $590.5 million, this 84-year-old grandma beat the odds of winning the game by 1 in 175 million.

Rumor has it that while Gloria was queuing for the ticket, a stranger at the front let her cut in line and buy it first. Sometimes, an act of kindness can cost a fortune, and this one was worth half a billion dollars. Gloria later chose to cash out half the sum instead of 30 annual installments of the full prize.

(Fun Fact: This event took place in a small town called Zephyrhills in Florida, whose annual budget is merely one-tenth of her lottery prize.)

Now that we’ve reached the end of this article, are you already wondering when your next lucky strike will be? Well, the good news is that you don’t have to go and play at casinos to be a millionaire. Why pay for extra bills when you can just roll the dice from your mobile phone?

iGaming is the new era of gambling and will slowly transform the future of casinos. If you want to know more, here is a beginner’s guide to the iGaming industry just for you!