A Beginner’s Guide to the iGaming Industry 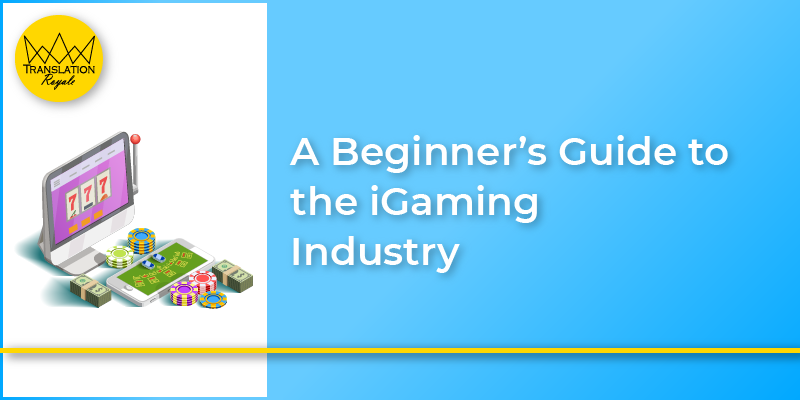 It is true that the term “iGaming” can be very confusing sometimes and it might even cause misunderstanding of what the whole industry is about. Especially if you are a newbie in this world, things can be pretty overwhelming. That is why we have prepared a beginner’s guide to the iGaming industry to take your worries away.

Let’s see what it’s all about!

iGaming, or in a layman term – “Internet Gambling,” was coined in the early 2000s when the popularity of online casinos just began to rise. According to a research article on taxonomy of gambling and casino games by Sally M. Gainsbury, Internet Gambling is defined as “an online game in which payment is required, monetary prizes may be awarded, and the outcome of the game is predominantly determined by chance.”

Online games in which betting is not involved do not fall under the category of iGaming. One good example is casino-themed games which require in-app purchases without real bets. They are known as Social Casino Games and are replicas of gambling activities but are free to play.

What makes iGaming or ‘eGaming’ as it’s often called, different from traditional gambling activities is that iGaming is purely tech-dependent, for example, online betting on a football match. On the other hand, traditional gambling would be playing poker in a room with your friends and placing real money as bets or in a land-based casino that only lets you enter with more formal attire.

Do keep in mind that Gambling and Gaming are two separate industries, and incorrectly using the word “gaming” for gambling activities has created confusion for many of us.

If you still don’t have a clue of all these classifications, here are some of the most popular examples of “iGaming” that are played online:

A brief history of online gambling

1994: Before the birth of online casinos, in 1994, the first ever gambling software was developed by Microgaming, which was one of the largest software developers in the online gambling industry at that time.

1996: In 1996, the Kahnawake Gaming Commission was established in the Mohawk Territory of Kahnawake, Canada for the regulation of online gaming activities and licensing globally. It was also in 1996 that Intercasino became the first internet casino to accept real money wager.

1998: Four years after its first breakthrough, Microgaming again launched its first ever online progressive slot jackpot called “Cash Splash.” Coincidentally, 1998 was also the year to witness the birth of the first internet poker room developed by a company called “Planetpoker.”

1999: Right before we jumped into a whole new century, the count of real-money online casinos has already reached more than 700. Multiplayer online gambling was also introduced in late 1999 which allows people to chat and interact with each other during the game.

2000: As we hit the Year 2000, UK Territories such as Isle of Man, Alderney, and Gibraltar (one of the most renowned iGaming Hubs today) also opened their doors to the online gambling industry. The internet gambling wave kept spreading across the globe, and the number of users rose to roughly 8 million worldwide while the industry’s revenue surpassed $2 billion! That’s almost 140% revenue increase in two years!

Meanwhile, in Australia, the government passed the Interactive Gambling Moratorium Act, which stated that any online casino that was not licensed but operating before May 2000 would be illegal. This meant that Australia’s first online casino, Lasseter’s Online, became the only legal online casino in Australia with an odd of taking any bets from Australian citizens.

2003: Despite all the rules and regulations, in 2003, one of today’s most popular online casino sites, 888.com, was introduced to the public. The number “8” represents luck in Chinese culture, and it resonates perfectly with the gambling industry. However, the same thing cannot be said for the US when the Unlawful Internet Gambling Enforcement Act (UIGEA) was passed in 2006, prohibiting gambling businesses from accepting any payments via the internet for online betting.

2010: Fast forward seven years, mobile devices became the King of technology, and through this platform alone, players have already wagered amount worth $10 billion by 2010!
Currently, there are over 85 countries which have legalized online gambling and the net worth of this industry is forecasted to reach $59.79 billion in 2020!

Now that we know a gist of how iGaming industry was born and has evolved into the current rising trend, let’s take a look at some of the top countries which are very well-known for their online gambling operation; Malta, the UK, and Gibraltar.

Gibraltar is the first British Overseas Territory to open its doors to online gambling businesses. Its history all started in 1998 with a company called Victor Chandler (BetVictor), which is the first company to be based in Gibraltar. Since then, a lot of casinos have moved there, making it one of the most popular places for iGaming. Apart from the legendary BetVictor, some of the most famous online casinos with HQs residing in Gibraltar include William Hill and 888 Casino.

Malta, one of the world’s iGaming leaders, is just a tiny island located in the Southern Mediterranean and is also the EU’s smallest member state. Once known as a popular holiday destination, Malta has diversified its economy beyond tourism and has morphed into the Mecca of iGaming businesses.

According to 2017 data by Malta Gaming Authority (MGA), there are 294 operating iGaming companies and this online gambling industry contributes to 10% of Malta’s GDP, that is approximately €1.1 billion. The numbers are very impressive, considering the fact that Malta joined the iGaming industry in 2014 (which is a decade after Gibraltar started).

Malta is also very popular among Nordic companies as a great headquarter base, and a few examples are Unibet, Betsson, Cherry and so many more.

The UK is home to many different iGaming businesses, and its Gross Gambling Yield (GGY) from the online gambling industry alone reached 4.5 billion Euro during April 2015 and March 2016.

Some of the top iGaming companies located in the UK include bet365, bwin.party, Playtech and William Hill. In England, rules and regulations for online users are relatively simple, in a way that anyone in the UK aged above 18 can deposit money into any licensed online casino website and play the game.

Unfortunately, the UK’s recent departure from the EU has shaken up the industry and uncertainty is in the air for the future of Gibraltar’s iGaming business as well. However, the industry is growing for the EU, and it will continue to do so. According to the European Gaming & Betting Association (EGBA), the EU is by far the largest online gambling market in the world and its revenue is estimated to reach 24.7 billion Euro by 2020.