The Pitfalls of Movie Title Translations 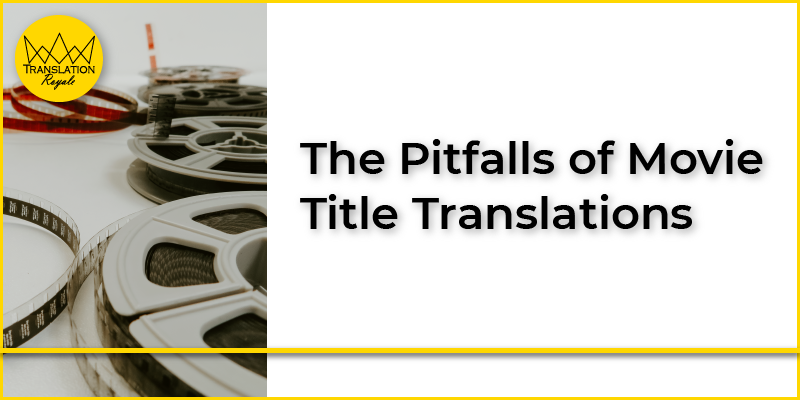 Reading Time: 4 minutes
A lot of countries dub movies. We Germans do it, the Spanish speaking world does it and a lot of other nations do it as well. There’s no shame in that. Alright, maybe the Scandinavians, who don’t do it, have a better English pronunciation in middle school than the average German college student, but that’s okay.

Dubbing movies comes with a whole pile of headaches. You have to think about wordplays, cultural differences and what happens when someone who’s supposed to be foreign in the movie speaks your native language? Yes, I’m looking at you L’Auberge Espagnole! It just comes off as ridiculous when you pretend to not understand a Spanish speaker in perfect Spanish.

Let us present you some instances where it all went awry from the get-go or clever options were used by some translators with foresight.

The first three movies of Die Hard was peak Bruce Willis. He was a buff action hero, ready to save everyone. But he could not save the Spanish translators of the movie titles.

In the first movie, Bruce Willis’ NYPD officer John McClane sets out to rescue his wife and several others from the clutches of German terrorist Hans Gruber (played by the unforgettable late Alan Rickman). Most of the movie takes place in Nakatomi Plaza, a 35-story skyscraper with a spectacular glass front in Los Angeles. Based on that information, the movie was released as “Jungla de Cristal” (Jungle of Glass) in Spain. That is fair enough and made sense for the first movie.

The second movie plays in an airport, though and such the Spanish title “La Jungla (alerta roja)” (The Jungle – Red Alert) seems a little bit disconnected. Things got even worse for the third part of the series, which played in a big department store, of all things. The Spanish translators threw caution to the wind and went back to the original title of “Jungla de Cristal” and just threw a “La Venganza” or “The Revenge” in for good measure. First of all, there wasn’t even that much glass and a department store is not a jungle, as much as some of them may seem to be one at times. The Vengeance part makes a little more sense since the antagonist in this movie is Hans Gruber’s older brother Simon, but that’s about it.

This experience should teach translators to not put all their eggs in one basket and always plan for sequels. It’s Hollywood – if anything makes some money, there will be sequels.

Germans are anglophile. Especially younger people use a ton of English expressions and aren’t afraid of English movie titles.
But marketeers still don’t trust those developments. Or at least they didn’t at the time Keira Knightley’s breakout movie “Bend it like Beckham” hit theatres in 2002. The movie was a big hit among audiences few could resist the charm of the young lead cast.

Bend it like Beckham, of course, refers to the irresistible skill of David Beckham, who was at the height of his career at the time, to give the ball a curve when shooting at the goal.

This concept was deemed too foreign for German audiences though and so the film, while being kept English, was released as “Kick it like Beckham”. David Beckham was widely known in Germany and kick is pretty close to the German word “kicken” which also means kick or even playing football. So the translators thought that Germany could handle an English movie title – just not the original one.

Funny side note on the US version of the movie: Beckham wasn’t very well known in the States at that time and so they wanted to release the movie under the name “Move it like Mia”, referring to football star Mia Hamm, who was much more familiar to US audiences. But upon protest from the movie’s director, the film was released under its original name.

The romantic comedy starring Katherine Heigl and Seth Rogen apparently came with an unexpected plot twist for the Argentinians, because the movie was released under the title “Ligeramente embarazada” there, which translates to: slightly pregnant.

The original title suggests just the opposite. This girl was very pregnant after a supposed one-night stand with Seth Rogan’s character. And also: how exactly can you be slightly pregnant?

Apparently, it’s a thing in South and Middle America, because Uruguay, Mexico and Peru released the flick under the same name. They should’ve taken a leaf out of Spain’s book in this case, because their title of “Lío embarazoso” translates to “embarrassing trouble”, which is much closer to the truth and also nicely plays with the false friend of “embarazada” which means pregnant and the English word embarrassing.

Ultimately, when researching for this post, I came across two really ridiculous translation fails that turned out to just be a figment of the internet’s imagination. But they’re too hilarious to omit.

A frequent visitor in top lists for movie title translation fails is the supposed French version of the title “The Matrix”. According to some internet dwellers, the movie was released under a title that translates to “The Young People Who Traverse Dimensions While Wearing Sunglasses”. I mean, it is quite a literal description of what’s going on in the movie. But it’s also not true – the movie was released as “Matrix” in France. Boring!

And finally, there’s a legend that the Chinese title of The Sixth Sense gives the whole big twist away, so if you haven’t seen this 1999! gem yet, do not read on. Legend has it that the Chinese called this movie “He’s a ghost”. Now, that would have sucked for moviegoers, but it is again not true.

Tina is a native translator, trained at the University of Leipzig as a translator for English and Spanish. Having also completed two years of study in journalism and political science, her background is pretty diverse. She is honing her English skills with hours upon hours of binge-watching Netflix – you know, apart from actually working with it.