Why Germans Love Their Compound Words 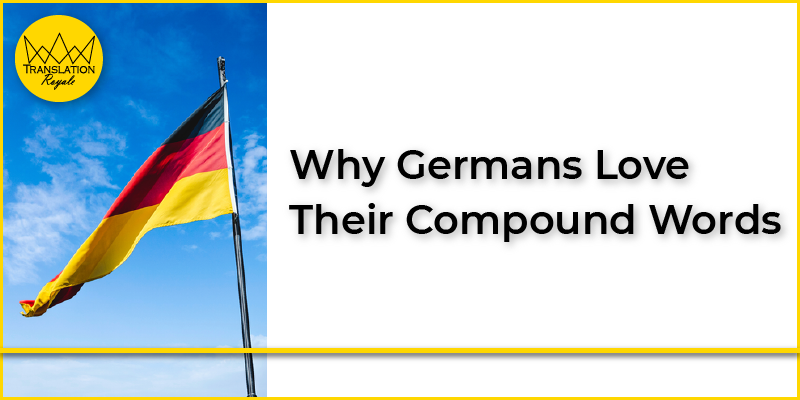 Reading Time: 3 minutes
Germans are known for being punctual, efficient and direct. Some even say we don’t have any sense of humour (which is not true by the way). As a nation, we like to travel, drink beer and football. When it comes to our language, people often describe the sound of German as harsh and unpleasant, almost like we were giving commands all the time. (Which we do! So, read on!)
From a linguistic point of view, German is undoubtedly one of the more complicated European languages. However, there’s one thing about the German language that makes it particularly inconvenient and, maybe most of all, an arch-enemy for non-natives: compounds.

In a nutshell, compounds are long words. Very long words. Also called compound nouns. Compounds are a particularity of the German language. Well, Finnish might be able to keep up with us, but there’s a distinctive difference between a lengthy Finnish word and a German compound. Whereas the Finnish add suffixes to all kinds of word classes to indicate a case, preposition or else, Germans simply string up nouns. Those „monster words“ consist of at least two already existing words. Based on this principle, compounds can contain an unlimited number of individual components.

German words every translator will hate

Let’s take a closer look at some of the – from a translator’s perspective – most painful German compounds. The undisputable front-runner and absolute horror for every non-native is the word „Rindfleischetikettierungsüberwachungsaufgabenübertragungsgesetz“. This nightmare of a compound features seven individual nouns with a total of 63 letters and had been the longest German word for over a decade. It’s a prime example of a compound and even has its own Wikipedia entry. Literally translated it would be something like “Beef-labelling-supervision-duties-delegation-law”.

But watch out! This is only half the battle as it’s supposed to be the „short form“. Like I said, it’s not true Germans don’t have a sense of humour. The official term for the whole thing is: „Rinderkennzeichnungs- und Rindfleischetikettierungsüberwachungsaufgabenübertragungsgesetz“.

Due to a change in the German law, the Rindfleischetikettierungsüberwachungsaufgabenübertragungsgesetz was abolished in 2013. It was succeeded by „Verkehrsinfrastrukturfinanzierungsgesellschaft“ which equals something like „traffic-infrastructure-funding-corporation“.

In 2003 the „Grundstücksverkehrsgenehmigungszuständigkeitsübertragungsverordnung“, another German law and the Rindfleischetikettierungsüberwachungsaufgabenübertragungsgesetz’s linguistic predecessor, set a new record at the time with a total of 67 letters until it was abolished in 2003.

Now let’s have a look at some everyday compounds. Here are some of the more common German compounds and their English equivalents as well as “translations”:

My heartfelt sympathies are with all foreign language students in this world.

Do you know an English version for “Gleichgewichtsdichtegradientenzentrifugation”? Let us know in the comments.

Germans like compounds for a reason as they make the German language more flexible. Compounds are an important means of word formation and extend a language’s lexis by simply stringing together any given number of nouns. Namely, technical terminology such as legalese or medical/chemical language consists of many compounds. In general, compounds are used to convey more information in one word and for reasons of language economy.

However, what many native speakers do incorrectly nowadays is the spelling. German compounds form without any spaces or hyphens. They are so-called closed compounds. For example, the compound “Willkommensangebot” consists of the two parts “Willkommen(s)” and “Angebot”. Although often used, the spelling “Willkommens Angebot” or “Willkommens-Angebot” is simply not grammatical.

Same goes for “Casinobonus” where “Casino-Bonus” and “Casino Bonus” are actually wrong, but might make sense from an SEO perspective. Meaning you will have to decide if you want to sacrifice one for the other.

As opposed to this, English admittedly also knows compounds. However, the English are not particularly fond of compounds and instead of turning two or more words into one, the individual components remain separated with a space between them.

For all those language nerds out there, check out our blog post about the most striking differences between British and American English.