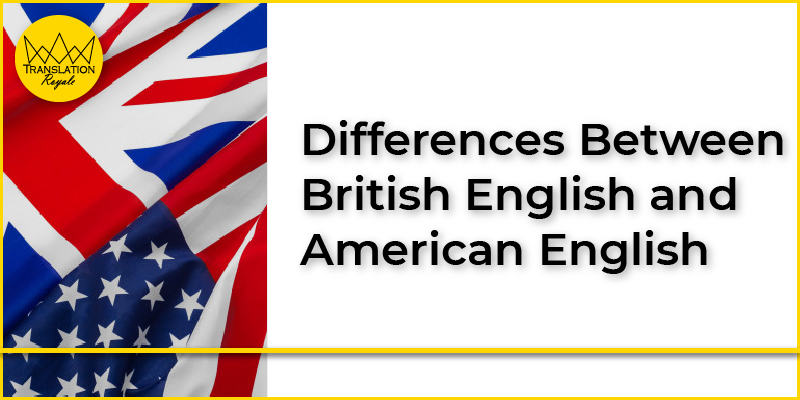 Reading Time: 2 minutes
English may be known and spoken all around the world but did you know it’s not one language at all? There are several variations and different forms of modern-day English, from Australian to Canadian to Indian and Irish. However, the undisputable most important differentiation is the one between British English (BE) and American English (AE).

Although all official English-speaking countries feature their very own characteristics, BE and AE influence and affect all other variations. Former British colonies like India, Australia, Singapore, South Africa or the Mediterranean island of Malta will speak British-style English while American English is taught in Latin America, Japan, and South Korea for example.

In today’s world, 1.75 billion people speak English either as a first, second or foreign language. With 225 million native speakers, American English is only spoken in the United States. British English, on the other hand, has a mere 62 million native speakers in the UK but outnumbers AE globally when taking into account all Commonwealth nations. However, the trend is shifting towards American English as BBC reporter James Harbeck explained in 2015:

The reason for the continuing success of AE in an international context is partly due to US’s huge population spreading across the globe and American broadcasting programs and TV shows being predominant and immensely popular. Hollywood, business, education and the World Wide Web further fuel the Americanization of the English language. British English may be taught at school, but in everyday life, most people are exposed to American English. American journalist Bill Bryson, the author of A Short History of Nearly Everything (2003), puts it straight and says:

Like Indian linguist Braj Kachru, Bill Bryson attributes this fact to the commercial and cultural impact the United States has on most other countries.

British and American English for Linguists

Now let’s take a look at those two major variations and explore the differences between British English and American English from a linguistic point of view!

The lexis of American English and British English can be a challenge to non-natives as it greatly differs. False friends are a common source of misunderstandings so it’s always good to be well prepared when traveling to English-speaking countries. Here are some of the most important, most useful and most trivial differences you should be aware of:

British and American English do not just differ in vocabulary but also in spelling. Whereas Britons use “ou”, “-ise”, “-re” and double consonants, American use “o”, “-ize”, “-er” and single consonants instead. The below table lists some illustrations:

With regard to grammar, British and American English show many differences, among them participles, preposition choices, use of definite articles, modal verbs and gerunds, only to name a few. Take a look at this by no means comprehensive list and get yourself acquainted with the most common grammatical differences in BE and AE:

With the above being said, we hope to have given you some useful information on how to handle both major streams of modern-day English. No matter if you prefer traditional, elegant British English or fancy some down-to-earth American English, with this article and a bit research and training, you’re covered.