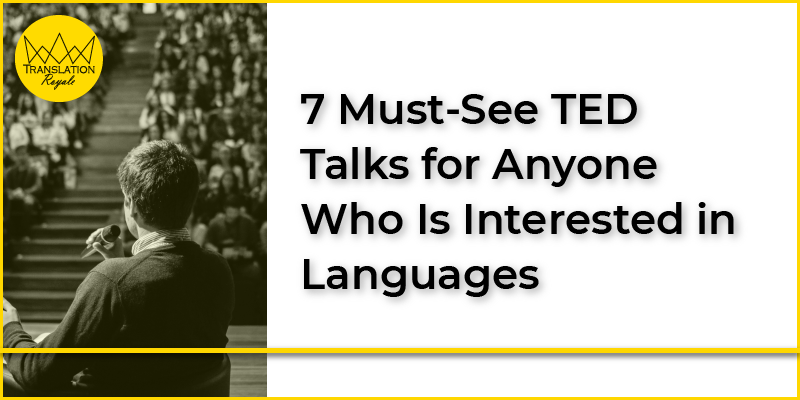 There are over 7,000 languages spoken around the world today, and each one is unique in its own way. So, how do we know where they originated from and how they are affecting our mind? Is the English language breaking down the language barrier or creating more problems?


To answer these thought-provoking questions, we have compiled the seven best TED talks about languages in this article. What’s excellent about these videos is that transcripts are readily available in various languages. So, here is a big shout out to the TED translators for their hard work!

According to the biblical story of the Tower of Babel, it was once believed that all humans spoke one universal language until they were split into so many groups. But, how did we end up with so many languages? Alex Gandler explains how linguists group different languages into families, using examples of the relationship between different languages.

Now it’s time to take a walk down history lane with this TED-ed video to witness how languages have evolved from such a relatively small number to thousands of languages that exist today.

2. One of the most difficult words to translate – Krystian Aparta

Have you ever wondered which words are the most difficult to translate? We are not talking about Harry Potter spells here (even though they should be on the list as well!).

This video starts with a question “Do you know where the pep rally is?,” and the speaker asks which word is the most difficult to translate in that sentence. The real answer here is “You.” The word “you” in English is very generic, and it does not really specify the gender, age or how familiar you are with the person you are talking to.

Krystian Aparta further describes the different usage of “you” with examples from languages around the world. So, my question here is… Are YOU ready to find out more about this?

“Go ahead, make up new words!” said Erin McKean, and I can’t agree more with it. Unique words add spice to our life, and it’s actually fun to use them (unless you are writing a news article or classic literature, but you know what I mean).

Talking about uniqueness, some of the modern English words we use today are original either directly adopted from other languages or mashed up. For example, the word ‘Caramel’ was borrowed from French, ‘brunch’ is a mix of ‘breakfast’ and ‘lunch,’ and even ‘friend,’ once a noun, is used as a verb now. These examples tell us that people and culture are shaping the word usage and not the other way round.

In this video, Erin McKean shows six ways to create new words in English to help you express your thoughts better and get your meaning across.

Not every surgeon in the world can speak English and not every English-speaking surgeon can easily be found everywhere either. But, for Steven Schwaitzberg, those are exactly two problems which he has to solve: language and distance. He is a surgeon/technologist who has successfully combined video-conferencing, and a real-time universal translator to teach laparoscopic surgical techniques to surgeons around the world.

Steven Schwaitzberg talks about how translation can save people’s lives with the help of cutting-edge technology. Miracles happen when the art of technology is combined with the beauty of humanity.

5. How languages shape the way we think – Lera Boroditsky

According to Cognitive Scientist Lera Boroditsky, there are currently about 7000 languages spoken around the world, and they all have different sounds, vocabularies, and structures. But, the question is “How does the language we speak shape the way we think?”

In this talk, Lera gives examples of how an Aboriginal community in Australia interprets time and direction in an utterly distinctive way. That’s probably because people pay attention to different things depending on what their language usually requires them to do.

Is “hangry” a real word? What about “tweeting”? These are all real words widely used among the younger generation but “how real are they if we use them primarily as slang and they don’t yet appear in a dictionary?,” Anne Curzan prompted. Well, I guess we will have to find out in this video itself.

Ideas are worth spreading, and that can only be true if we only spread those ideas in a way that everyone can understand them. You might not know this, but a language dies every 14 days, while English has evolved into a global language. However, it seems like the globalization of English is creating more language barriers rather than eliminating them.

Patricia Ryan, an English teacher with 30+ years of experience, prompted us to celebrate the diversity and spread great ideas across the world without language boundaries.