A Brief History of IT Localization 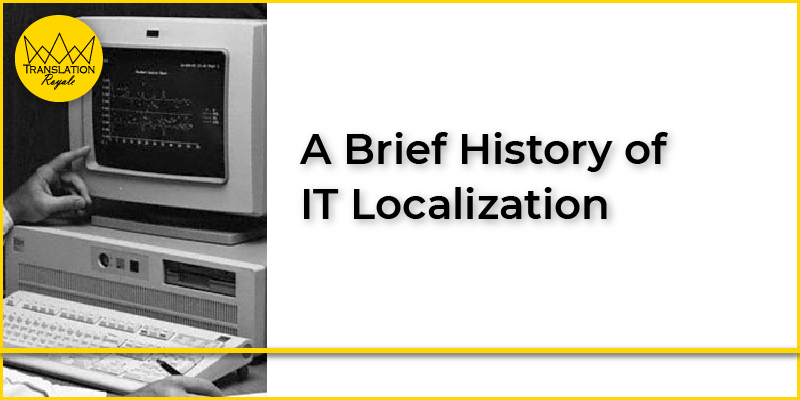 Before we begin discussing the in-depth history of IT localization, let’s take a look at a summary timeline of how localization evolved from the late 1970s until today to give you a better and clearer understanding of this article.

The Beginning of Everything: The 1980s

The history of IT localization began in the early 1980s when the IT industry prompted a huge demand for localization and translation experts for software and hardware production for their international markets.

Computer technology started to evolve from the use in professional or industrial environments to something that is more suitable for everyday personal use. These home computers for non-technical users were first introduced to the American households in the late 1970s and became largely popular during the 1980s.

With the wide-spread popularity of home PCs, US-based IT giants began their international market expansion in the early 1980s. Microsoft opened its first overseas sales office in Tokyo in 1978 and set foot into Europe a year after. Sun Microsystems also expanded its operations to Europe in 1983, and to Asia and Australia in 1986.

Selling home PCs in other parts of the world also means there was a need to produce both software and hardware that meet the needs of locals in terms of language, habit, and standard. For example, Word Processors, one of the main uses of the desktop computer at that time, would need the correct usage of character input, output, and placement which are specific to each language.

The same can be applied for hardware production segment. In 1985, the Spanish government announced that all keyboards sold in Spain should have the “ñ” key.

Initial Challenges and Road to Internationalization

Software companies faced several roadblocks during their product localization process. Usually, the software development team would just hand over the software code and corresponding source files to the localization team without any collaboration. The main element of the task was to translate the product and provide necessary supporting documents along with it. Some vendors had to establish in-house translation teams and language experts while some allocated these responsibilities to their international offices or local distributors.

Either way, no collaborative effort between localization team and product development team was seen in both approaches. Moreover, the additional technical requirements for different languages and the back-and-forth localization process were very inefficient, which eventually triggered the need for internationalization.

According to Globalization & Localization Association (GALA), internationalization is defined as “a design process that ensures a product (usually a software application) can be adapted to various languages and regions without requiring engineering changes to the source code.”

Main features of internationalization include support of international language character sets, extracting translatable text embedded in the source code and addition of functions and features specific to the target language. It is also considered as a crucial step towards localization.

Internationalization is defined as “a design process that ensures a product (usually a software application) can be adapted to various languages and regions without requiring engineering changes to the source code.”

The Shift in Localization Industry Trends

In the beginning, IT companies used in-house localization teams, and big corporates like Microsoft and Oracle would transfer the tasks to their teams in European HQs, many of which are based in Ireland. Cheaper salary, exemption from VAT (all products including software exported to Europe from Ireland), as well as relatively low development costs tempted the U.S. companies to station their headquarters in Ireland.

Due to the increasing concentration of software manufacturing companies, Ireland became the leading hub of the localization industry during the early 1990s. People from all over Europe were recruited and relocated to Ireland just to be trained as localizers. Despite this rising popularity, the whole idea of in-house localization method was, in fact, unsustainable.

Due to the rapid growth in international sales, market fluctuation, and not being able to cope up with an insane amount of content work, software companies decided to outsource their localization tasks to external vendors.

Later in 1987, TRADOS, a German translation company started reselling the INK TextTools. A year later, they developed their own Translation Text Editor plug-in called ‘TED.’ This was quickly followed by the launch of the initial version of the Translator’s Workbench Translation Memory (TM) Product in 1992.

TM technology played a major role in “simship,” the simultaneous shipment of software products in all language versions at the same time. In the early days, software companies demanded software and supporting documents to be simultaneously translated into all targeted languages while the English version of the product was being developed. With the help of TM technology, one could simply add on translations for further software updates as the development progressed forward.

New Era of Localization: The 1990s

The localization service industry reached a sky-high achievement during the 1990s. Software and hardware manufacturers saw the benefits of outsourcing localization tasks and handed over the responsibilities to all-inclusive localization agencies so that they could solely focus on the production part.

Localization processes were no longer operated separately and the teams were formed in a more structured and unified manner. A typical localization team would consist of a project manager, a linguist, an engineer, and a desktop publisher to work together for projects.

As the competition got stronger, localization service providers either teamed up with each other to outplay their business rivals or added extra services to the business to reach a wider scope of clients. Several small localization vendors were acquired until a few of the big companies, e.g., Bowne Global Solutions, Lionbridge and SDL International, were left to dominate the market.

There was also an emergence of a more structured framework in outsourcing localization during the 1990s. Multilanguage vendors (MLVs) took over multilanguage projects and outsourced the translation of targeted languages to respective single-language vendors (SLVs) which work on one specific language from several language sources.

By the end of the 1990s, project management systems and publishing localization processes for multilingual projects had already become more professional, and along with this trend, Globalization Management Systems ‘GMS,’ was introduced to the localization industry.

GMS, or currently known as Translation Management System (TMS), is a powerful tool which maximizes the efficiency of translators by automating all repetitive laborious workflow so that the experts can focus on their manual creative content work. In this way, not only the overall management responsibility and production costs were reduced but also it was much quicker to deliver a high-quality project.

Despite these advantages, human input was still greatly needed to deliver the most accurate translations.

Nowadays, technology is not just about riding the dot-com wave and localization is not limited only to the IT industry anymore. Content for various business types are being translated into several targeted languages and promoted online to attract international customers as part of the marketing localization strategies.

Without a doubt, both the business and technology sectors have developed so dynamically, as if, it is almost mandatory to adopt localization to introduce your business to the global market these days.