Know the Differences Between Soccer and Football 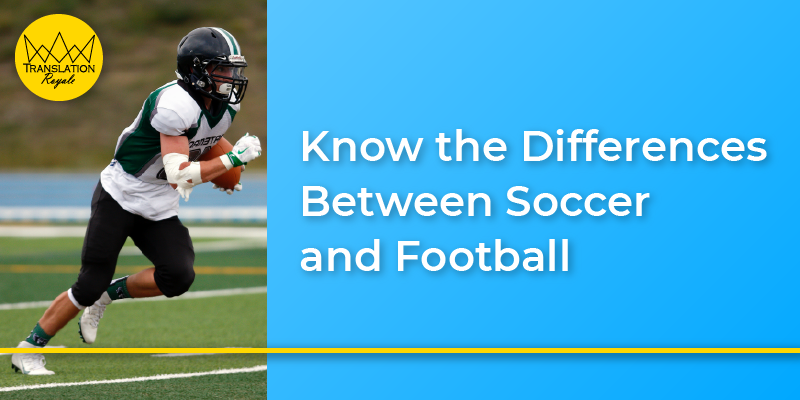 For the longest time, people (i.e., Americans vs. the rest of the world) are still arguing about the usage of those terms. Some say that for the game that is played by kicking the ball, it is only natural to call it “football.” And then there is football in America where people mainly use hands to throw the ball. So, which one is what?!

This “soccer vs. football” debate could possibly divide nations and split friendships apart, or were the damages done already?

But, one thing for sure is that it is not a chicken and egg problem (although one ball is an actual egg 🏈), so we can actually trace back the origin of these two words. Let’s start with the origins of “soccer.”

The Origins of “Soccer”

Most people blame Americans for this “soccer vs. football” debate but it is British people who coined the term in the first place.

The word “soccer” is an abbreviation of “Association” from “Association Football” with the suffix “-er” added to it. It came into use in the late 18th century after the Football Association coined the term “association football” in 1863. The purpose was to distinguish the game from other types of football games played at that time, especially Rugby Football.

The Fate of Soccer on the Other Side of the Ocean

“Soccer” continued to remain as an accepted term for nearly a hundred years in Britain until the 1980s. It was usually associated with upper middle-class students from elite universities such as Oxford and Cambridge. Later, it was quickly adopted in the U.S. to distinguish the game from American football. Since then, the usage of the word “soccer” has declined in British publications, and it was perceived as an American context rather than a British one.

The increase in popularity of the word “soccer” in America also coincides with the golden days of the NASL (North American Soccer League) in the 1980s, the year when their ticket sales reached a peak of 5.5 million tickets for its league matches.

Even though the British dropped the use of “soccer,” it continued to thrive in America to distinguish the nation’s favorite American football game from Association Football.

So, if your American friends invite you to watch a football match together, you’re more likely to see a game of shoulder-padded giant players attacking each other while trying to pass or run with a ball to opposite ends of a field.

American football, a version of gridiron football, is a crossover between soccer and Rugby. This sport is widely played not only in the U.S. but also in Canada. The first official American football game was played in 1869 between two college teams; Princeton and Rutgers. However, this early game was said to be based on a set of modified London Football Association rules.

There were 25 players on each team, and the objective of the game was to score points by shooting the ball into the opponent team’s goal post. They were not allowed to throw the ball or run with it either. These rules were nothing close to the American football game that we know today.

It is all thanks to Walter Camp, also praised as the father of American football, that modern-day American football finally took shape. During his time at Yale as the head football coach, he implemented several major adjustments to the game, which include downsizing the number of players from 15 to 11 people, reducing the dimensions of the field, along with a new scoring system, team positions, and playing style.

After undergoing decades of transformation, the modern-day American Football is now the most popular sport in the U.S. with global market revenue of more than $15bn in 2018 alone.

The differences between these two sports extend far beyond the origin of their names and how they evolved into the sports we know today. The main contrasts actually lie in the nature of the gameplay, and to help you understand better, here is a side-by-side comparison of the major differences between soccer and American football.

Football in the Rest of the World

While American football still remains the most popular sport in the U.S., Association Football spreads across the globe quickly, and it is now the most-played sport in the world with a fan base of 4 billion people worldwide.

As the support for Association Football becomes bigger in the U.S., the “soccer vs. football” debate becomes more widespread too.

As you can see from the map, all the countries colored in grey call Association Football “football” in their own languages. This can be done in a couple of ways. The first method is to directly use the English term “football” and pronounce it using their own linguistic rules such as Fußball, Fútbol, Futball, Futeball, Fotbal, or Futbolas. Another method is to literally translate the words “foot” and “ball” separately.

To give you a better idea, here are some good examples of loanwords for “football”:

No matter what term the rest of the world uses for Association Football, the yellow-colored nations only stick to using different names for “soccer.”

One main reason is that different types of football games have already dominated in those countries, and the only way to avoid confusion is to call Association Football as “soccer.”
In Australia, where football games like Australian Rules Football (or “footy” as Aussies call it), Rugby Union, and Rugby League are popular, it is better to use a different term to distinguish those games from each other.

Another reason why some countries like Japan and Papua New Guinea used derivative terms of “soccer” is mainly due to the heavy influence of the American culture on those languages. For instance, in Japan, the term “Sakkā,” derived from “soccer,” is more commonly used than “futtobōru” (フットボール). Papua New Guinea, once a British colonized nation, also calls soccer as “Soka.”

Ironically, while the whole world is divided between different names for “soccer” and “football,” Ireland is the only place in Europe that still calls Association Football “soccer.”

This is probably because Gaelic football (Gaelic) had already won the hearts of Irish people before Association Football became a worldwide phenomenon. Gaelic Football is known to be a harder game to play with harsher tackles compared to its cousin English Football, and it is also said to be the origin of Australian Rules Football. Which is why there are the yearly International Rules Series where Ireland and Australia play for the crown of a combined Footy-Gaelic rules champion.

Since we are talking about some popular football variants played in Australia and Ireland, here is a list of different types of football which fall under four main categories:

All in all, whether you choose to call Association football “football” or “soccer,” there is actually nothing wrong with it.

However, if it is for your online sports betting website or iGaming blog, the choice of terminology does matter for your content, and of course, your target audience. That’s why it is important to do proper research on your target market before localizing your content for a specific region.

After all, even the football betting markets are very different from each other. So make sure your localization agency of choice knows which sport you want them to translate. Although they should be good enough to know that Arsenal is definitely not going to score a touchdown, it could get difficult if you only give them the key “tackle” which would be translated differently for both sports in different languages.

Regardless of the differences in opinion, the truth is both sports can create exciting moments for people from all over the world to unite and celebrate the elements of healthy competition, athleticism, hard work, and perseverance.

So, leave the disagreement behind and start appreciating the differences between soccer and American football that make both games unique.

How did you like May Thawdar Oo’s blog post “Know the Differences Between Soccer and Football”? Let us know in the comments if you have anything to add, have another content idea for iGaming blog posts, or just want to say “hello.” 🙂