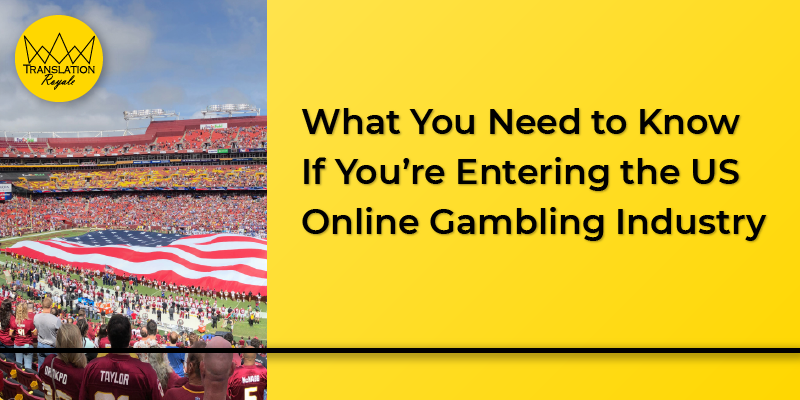 Reading Time: 6 minutes
Author Name: Sebastian Scheplitz As the European gambling market gets more saturated with each passing year, things start to open up on the other side of the Atlantic – especially when it comes to sports betting. Recent legislative changes are rapidly changing the betting business in America.

So, is online gambling legal in the US? – You bet it is!

And as a result, the current state of sports betting in America is looking very promising for iGaming companies that want to capitalize on the US market.eo.

After decades of a monopoly-like situation, where sports betting mainly took place in Nevada, several states are finally legalizing sports betting. And this is happening not long after New Jersey’s Supreme Court victory in 2018 resulted in a nationwide go-ahead for states that wish to legalize sports betting.

In other words, it’s only a matter of time before the US online gambling market size will be absolutely gigantic.

What you need to know about American gamblers

With a huge population and exciting financial projections, the American gambling market is, undoubtedly, of interest to any iGaming company. That said, it’s always good to have some knowledge before you enter a new market.

Here are some things you should know about American gamblers and the US gambling market:

1. Americans are mainly into sports betting

According to studies from Grand View Research, most American gamblers wager on sports. There are also several studies proving that Americans are more than willing to place their bets online.

For instance, as of November 2018, New Jersey players wagered $238 million on sports online. To put these numbers into perspective, that’s 72% of all sports bets that were made during that period.

2. These are the sports Americans bet on

According to Statista’s research, 77% of bets were made on football, and other research shows that 24% of all bets were made specifically on the NFL.

In second place we have basketball and horse racing. This is a close draw, and some conflicting studies are circulating on the web. That said, horse racing seems to be the second most popular sport.

In third place, we have baseball, followed by soccer and MMA in fourth and fifth place.

3. Only a small percentage of all bets are made legally

According to the American Gaming Association, only 3% of all bets were made legally in 2018. Hopefully, that will change as more states move towards legalization and drastically change the US online gambling market size.

In the same report, AGA also stated that the illegal sports betting market was worth somewhere around $150 million. These numbers go to show that the American sports betting laws have been out of touch with reality for quite some time.

4. Most Americans want to bet legally

According to a Nielsen survey, 71% of Americans would like to bet legally. This obviously means that there will be a huge untapped market with promising prospects available as soon as sports betting becomes legal in all 50 states.

Furthermore, projections that Nielsen made in 20018 revealed that four major US leagues stood to gain $4 billion in annual revenue as a direct result of the legalization of online sports betting. In other words, the sports betting business in America is looking really good!

5. 80% of Americans think online sports betting should be legal

Eighty percent of Americans think online sports betting should be legal. In other words, Americans are more than willing to start placing their bets online.

Research shows that 47% of millennials don’t like brick and mortar casinos.

And considering that millennials are said to be the biggest population in the US history, these numbers may have a significant impact on US betting trends.

It’s safe to assume that millennials make up a rather large part of the American player base, and there’s something to be said about creating content for this audience.

Millennials are often considered “digital natives” and are generally considered to rely heavily on technology. They know their way around apps and search engines, and also have certain expectations and preferences when it comes to how they consume content and services online.

We’ve already created a guide on how to create iGaming content for millennials, in which you’ll find several useful tips on how to capture and entice a younger audience.

Another important point here is that you shouldn’t assume that millennials don’t like to read. Actually, there is research showing that American millennials like to read news more than older generations do – the difference lies in how they read, i.e., millennials prefer to read digital print – nothing surprising here.

Another big takeaway here is that many millennials are “scanners” rather than “readers”. And therefore, you should always make sure that the most critical parts of your message can be easily found.

A few more proven ways to attract millennials with content is by sharing user-generated content of your brand and making use of micro-influencers in your niche.

This means that US online casinos and sports betting operators need to rethink their content strategy to attract millennials, and ultimately make them spend and win money on their sites.

Engaging content like football reviews with stats snippets or easily shareable information on social media platforms will help not just US iGaming businesses but all businesses everywhere.

7. The American market has enormous potential

Projections show that the American sports betting market could be worth $245 billion in just five years, once online sports betting is fully legalized and implemented in all 50 states.

To give you an idea, Peter Jackson, CEO of the mammoth company – Flutter, has described the opening up of the US as “the most exciting development since the advent of online betting”.

New Jersey has seen incredible revenue since the state legalized sports betting in 2018. The state had a handle of 16.4 million in June 2018, and last year, New Jersey reported handle of more than $557 million and revenue exceeding $300 million.

9. Americans play on their phones

The reports mentioned above also reveal that nine out of ten bets are placed via apps. In other words, the vast majority of American players are betting on their phones.

At this stage, the big takeaway is that Americans play on their phones and that they’re mainly into sports betting at the moment. Furthermore, American sports preferences may vary a great deal from those of European players.

If you want to captivate US punters, it would be wise to brush up your knowledge of American football and familiarize yourself with American sports in general. If you want to give off a credible impression, you better know your product well.

When it comes to tonality, Americans tend to prefer an informal tone. And, as always, there are cultural differences, which are important to get right if you want to make a lasting impression.

To give you an example, that British wit and slightly cheeky humour doesn’t necessarily translate well at all when speaking to an American audience.

In other words, the difference lies in the subtle nuances in your communication – which is why using professional content services can make all the difference when you’re entering a new market.

How did you like Sebastian Scheplitz’s blog post “What You Need to Know If You’re Entering the US Online Gambling Industry”? Let us know in the comments if you have anything to add, have another content idea for iGaming blog posts, or just want to say “hello.” 🙂