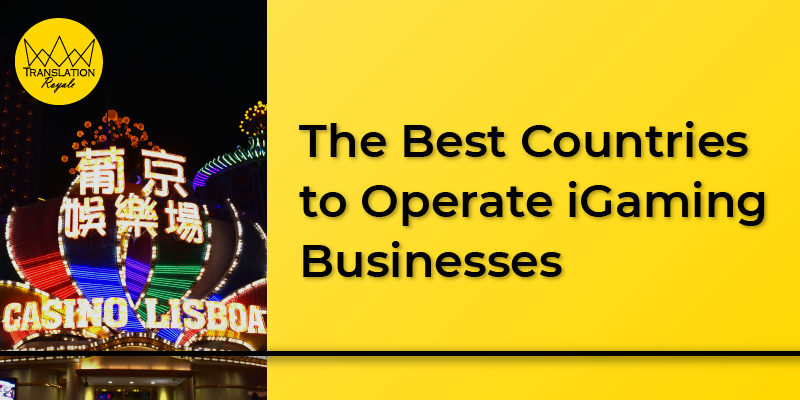 Reading Time: 6 minutes
Author Name: May Thawdar Oo Gambling is a world-wide phenomenon dating back thousands of years. Traces of gambling have been found in early civilizations from all four corners of the world, and it seems there is something intrinsic about gambling.

It’s, therefore, no surprise that online gambling has stirred a buzz and is spreading like wildfire all over the world. Despite the widespread popularity, market size, government regulations and the overall gambling culture are what determine a market’s profitability. As countries are relaxing regulations, the iGaming industry is rapidly expanding and conquering new markets.

And here are some of the best countries to operate iGaming businesses right now.

Gambling in the Scandinavian Countries

Scandinavian countries, and Sweden in particular, has been a leading force in the iGaming industry for decades.

In fact, many leading online casinos and some of the most well-known game developers happen to be Swedish too. It then comes as little surprise that Sweden is one of the biggest iGaming markets in Europe.

So, what sets Sweden apart from other online casino markets? Well, for starters, a recent research from the Swedish gambling commission shows that 6 out of 10 Swedes have played at an online casino within the last 12 months (link in Swedish). And out of this group, 33% has played at least once a week. So, even though Sweden has a relatively small population of 10 million people, we can say that the country has a strong gambling culture.

You can tell that Swedes love to gamble just by looking at how many leading iGaming companies have Swedish roots. Swedish iGaming pioneers have helped push the boundaries as far as game development, payments and user experience are concerned.

Swedes love technology, and today, almost all Swedish online casinos let players deposit and log in using their bank details. This means they won’t have to bother with tedious registration processes anymore. Another advantage here is that their information is kept anonymous and safe at all times.

Moving on, Sweden has one of the most sophisticated responsible gambling practices known to the industry. The Swedish government has taken charge and centralized the entire process, making sure that its citizens are kept as safe as possible.

What this means is that players can self-exclude from all Swedish online casinos through Spelpaus.se – the government-run platform that all Swedish casinos are required to be fully integrated with. Furthermore, all Swedish casinos are obliged to display Spelpaus’ tools on their start pages, allowing players to set deposit and gambling limits within a matter of seconds.

Last but not least, the Swedish government doesn’t impose tax on players’ winnings. Casinos need to pay 18% tax on all revenue, but players get to keep their winnings all to themselves.

The UK has been one of the biggest iGaming markets for as long as there have been online casinos. Just like Sweden, the UK has produced some of the most well-known casino brands and game developers, and the country also happens to have a strict gambling commission. We should also mention that the UK, just like Sweden, doesn’t tax players.

The UKGC (UK Gambling Commission) has made examples out of several operators by giving them hefty fines, sending a strong message to the rest of the industry. As a result, some brands have chosen not to enter the UK market, leaving only those with sufficient experience and the digital infrastructure to keep up with the UKGC’s demanding standards.

Just like the Swedish gambling commission, the UKGC places a big emphasis on responsible gambling practices. For instance, Casumo – a well-known online casino who built its brand image on cartoonish feel and cuddly creatures – was forced to remove its mascots from all marketing materials, after the UKGC ruled them to be appealing to minors. The UKGC didn’t stop there but gave Casumo a £5 million fine for failing to “put in place effective safeguards to prevent money laundering and keep consumers safe from gambling-related harm”.

Casumo is far from the only casino affected by the UKGC’s strict measures. And after learning that a large number of operators hadn’t met their obligations, the UKGC has taken widespread regulatory actions against online casinos.

Recently, the UKGC even went one step further in its efforts to make gambling safer by introducing a credit card ban. Since the 14th of April 2020, British players can’t deposit money using credit cards, and the ban even extends to e-wallets using credit cards. And although the ban might cause inconvenience for players initially, it shows that the British government is genuinely concerned with ensuring its citizens enjoy casino games responsibly.

Furthermore, last month, two British online casinos had their licenses suspended after having failed to fully integrate with GAMSTOP’s responsible gaming practices – which goes to show that the UK has one of the strictest online gambling regulations in Europe despite being the biggest market.

Having a significantly larger population than Sweden, the UK online gambling market is considered to be huge. In 2018, the UKGC reported that there were approximately 34 million active accounts in the country, and another study conducted by the UKGC shows that 47% of Brits have gambled in the last month.

And with increasingly more betting shops shutting their doors in recent years, it’s safe to assume that more and more punters and casino players are taking their business online.

One of the most booming iGaming markets in Europe right now is Germany. Plenty of operators and affiliate companies have been turning their heads towards the German iGaming market in recent years, because of the country’s upcoming changes and current gambling trends.

Germany recently handed in its overhauled gambling regulations to the European Commission in preparations for a new framework that’s to be implemented in June 2021. This new framework will mean an expanded iGaming market where online casino and poker will be allowed alongside sports betting, which is already an up and running market in Germany.

As expected, this expansion comes with some strict regulations imposed by German authorities. For instance, there will be a €1,000 deposit limit for players, and slot stakes will be limited to €1 per spin. Furthermore, each spin must last at least five seconds, which eliminates popular fast play options.

Germany will also allow states monopoly over table games, and just like Sweden and the UK, Germany will force operators to comply with strict responsible gaming processes and regulations.

For affiliate companies, this market presents some unique challenges as no deals based on revenue, customer deposits, or customer activity will be allowed.

With a population of 83 million, Germany is one of Europe’s most promising markets, especially since research by Goldmedia shows that the German gambling market has grown by a staggering €300 million in just three years. And albeit the growth can’t be contributed to online gaming alone, this 33% increase still clearly shows that Germans are very enthusiastic about gambling.

Putting all the pieces of the puzzle together, now is undoubtedly an excellent time to enter the growing German market and try to establish a solid presence before the new regulations are implemented in 2021.

The US Online Gambling Market

So far, we’ve talked about some of the largest and most lucrative European markets, but online casinos are rapidly gaining momentum in other parts of the world as well.

The US is slowly but surely allowing online casinos to enter more states, and world-renowned operators are making strategic moves to get their share from this potentially lucrative market.

Americans are, of course, no strangers to gambling, and it’s probably only a matter of time before almost every state allows online casino games. And since today’s casino games and websites are way past the teething stages, US players will get an excellent online casino experience from the get-go.

First-class games, mobile-optimized websites and swift payment solutions are in place, and all that’s needed is a go-ahead from all 52 states. And as soon as operators get the go-ahead, they certainly have the means to take the American casino market by storm.

iGaming companies are, of course, eager to get the green light as there is a lot of money to be made on gambling in the US. According to a study carried out in 2018, American gambling generates revenue of a staggering 137.5 billion dollars annually. And as soon as legislative issues are settled, established European online casinos and sports betting brands are sure to make a big push in the US.

Of course, operators will have to make tweaks to tailor their products to the American market. For instance, knowing the differences between football and soccer, and learning what slots and table games speak to US payers, will be an essential part of the process.

All countries we’ve mentioned have rich gambling cultures that make them ideal for iGaming companies. And even though some countries are still at the infancy stages as far as regulation is concerned, they are worth looking at and preparing for.

However, it wouldn’t make sense to enter the biggest iGaming markets without a solid content strategy. And even if human love for gambling seems to be universal, there are many cultural differences you need to consider when presenting your brand in a new market.

That’s where iGaming content localization expertise comes into the picture. If you want to be successful in a new market, you need to speak a language that your audience can relate to. Cultural norms can vary quite a bit, and a witty joke that strikes a chord with UK players, might not go down as well in Sweden, for instance. And these cultural nuances are likely to get even more pronounced as you enter markets in other continents.

How did you like May Thawdar Oo’s blog post “The Best Countries to Operate iGaming Businesses”? Let us know in the comments if you have anything to add, have another content idea for iGaming blog posts, or just want to say “hello.” 🙂