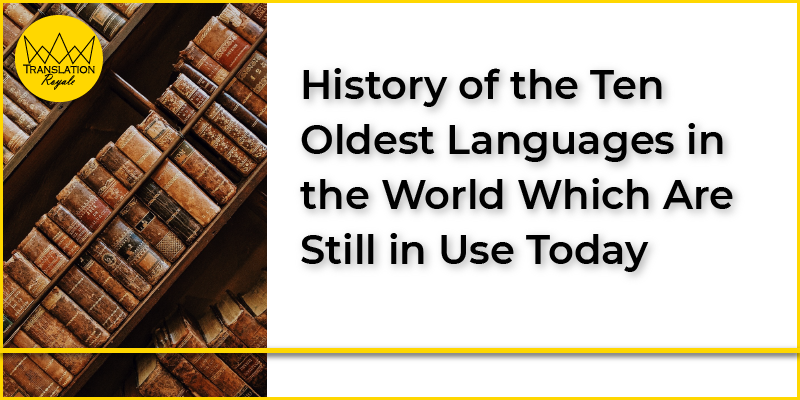 Since primitive age, we humans, have used different ways to communicate with each other, exchange information, express ourselves, and even be creative. Generation by generation, such means of communication have evolved into more systematic written forms or better speech systems, aka languages. Each language tells a story of our ancestors, our society, how each language is/isn’t related to each other, and how it has shaped the world we are living today.

There are currently around 7,102 languages spoken around the world!

To understand more about such interesting facts, we are going to talk about 10 of the oldest languages in the world which are still in use today. But, let’s do a little “Jeopardy” before we start!

Which country (or perhaps, region) is leading the chart with the highest number of languages in the world?

Well, you will have to read on to find out more! For now, let’s dig deeper into the history and current status of some of the oldest languages in the world which are still existing today.

Hebrew belongs to the Canaanite sector of the Northwest Semitic branch under the Afro-Asiatic language family, and it is the only Canaanite language still spoken today. The oldest Hebrew texts discovered is believed to be written in Proto-Canaanite characters and is approximately 3,000 years old.

As much as Hebrew thrived as a spoken language in the Kingdoms of Israel and Judah from 1200 to 586 BCE, its usage began to shrink and “almost” died out by the end of 2nd Century CE. Although it was never actively spoken during that time, it continued to survive as a sacred liturgical language (i.e., only as religious texts) until its revival.

It was in the 19th century when a Jewish Activist, Eliezer Ben-Yehuda, brought Hebrew back to life as a modern spoken language. Finally, in July 2018, Modern Hebrew was declared as the official language of the State of Israel, and it is now the standard form spoken by nine million people worldwide.

Considered the oldest languages in Western Europe, Basque is a language of mystery, whose origin has yet to be determined.

Among several postulations, one popular theory is that the early forms of Basque existed way before Indo-European languages settled in the region, including the Romance languages that predominate the countries surrounding Basque-speaking regions.

Perhaps, this could explain why it is unrelated to any other European languages, although it is mainly spoken by people living in Spain and France.

In 1979, Basque was established as the co-official language of the autonomous Basque Country of Spain, along with Spanish. A more specific data visualization of Basque-speaking regions can be seen in the map below:

Lithuanian is one of the two living Baltic languages, which is derived from the Eastern Baltic branch of the Indo-European language family.

It is also said to be one of the most conservative Indo-European languages still spoken today. It means that its grammar and phonology haven’t changed significantly over its history and it still retains archaic features of Proto-Indo-European that can only be seen in ancient languages such as Vedic Sanskrit or Ancient Greek.

Do you know which language shared the same Baltic branch with Lithuanian?
(Pssst…The answer is hidden in the illustration!)

The earliest Lithuanian written documents discovered were translations of the Lord’s Prayer, the Hail Mary, the Ave Maria, and the Nicene Creed which were written in the Southern Aukštaitian dialect, presumably during 1503 to 1525.

The history of the Icelandic language began sometime in the 9th century when Norwegian vikings, who spoke an Old Norse dialect, settled in Iceland. The oldest Icelandic texts discovered were assumed to be written around 1100 AD, and the oldest single text being Íslendingabók followed by Landnámabók.

Although there were considerable pronunciation changes and vowel shifts during the 12th – 16th century period, written Icelandic, however, has not changed much since the 13th century. That’s why modern Icelanders can comprehend the original Icelandic literature works that were written more than 800 years ago.

The earliest example of the Irish language was written in Ogham (primitive Irish alphabets which were later replaced by Latin characters), dating back to as early as the 4th century.

Moreover, early Irish literature works are said to be the oldest vernacular literature in Western Europe as they were written in the native language, instead of using Latin characters like many European languages at that time.

Modern Irish is the first official language of Ireland, alongside English, and became the 21st official EU language on 1st Jan 2017. Despite being the state language, its usage has been declining since 1600 and more shockingly in the 19th century due to the Famine, emigration, and suppression of education by the British government.

According to 2016 data, out of 39.8% of the population (1.76 million people) who could speak Irish, only 1.7% of them (73,803 people) use it on a daily basis. With such an alarming decrease in the number of Irish speakers, this language is now considered endangered by some expert linguists.

Independently surviving to date as a Hellenic branch of the Indo-European language family is Greek, a language that is native to Greece and Cyprus, and other Eastern Mediterranean regions. In addition to being an official EU language, it is also recognized as a minority language in Albania, Australia, Hungary, Italy, Romania, Turkey, and Ukraine.

Looking back at its history, Greek has been spoken in the Balkan peninsula region approximately since 3,000 BC, or perhaps even earlier. In terms of written form, Linear B clay tablet, which was written in Mycenaean Greek (the earliest recorded form of Greek language), was said to be the earliest piece of discovery. The writings on this clay tablet were estimated to have been written sometime between 1450 and 1350 BC, making Greek the world’s oldest recorded living language to date.

Belonging to the southern branch of the Dravidian languages, Tamil is the oldest of the four literary languages in the Dravidian family. Linguists suggest that the earliest epigraphic evidence of Tamil is thought to have been written from the 2nd century BC. There are also records of short Old Tamil inscriptions in caves and on pottery, which seemed to be from the period between the 3rd and 2nd century BC.

It is the official language of the Indian state of Tamil Nadu and the Union Territory of Puducherry, Andaman, and the Nicobar Islands. It is also one of the official languages in Sri Lanka and Singapore, with significant numbers of speakers in Malaysia, Mauritius, Myanmar, and South Africa.

At present, Tamil is the 19th most spoken language in the world with approximately 81 million speakers worldwide.

Another ancient language that is native to India is no other than Sanskrit, which can be classified as an old Indo-Aryan language, under the Indo-Iranian sub-group of the Indo-European language family.

The first written record of Sanskrit is called ‘Rigveda,’ a collection of ancient Indian hymns written in Vedic Sanskrit scripts which were most likely produced around the 2nd millennium BCE. If this verification is correct, it means that the Sanskrit language is more than 4,000 years old!

In the present day, Sanskrit is registered as one of the 22 official languages of India in the Eighth Schedule to the Constitution. In 2010, Uttarakhand was the first state in India to announce Sanskrit as its second official language, followed by the Himachal Pradesh State in 2019.

“The longest word in the world” by the Guinness Book of World Records is a Sanskrit word written in the Devanagari script, with 195 characters in total.

If you want to read up on this Sanskrit word, head over to our article: “The Longest Words in the 12 Most Popular European Languages.”

Farsi, or known nowadays as ‘Persian,’ is the most widely-spoken language of the Iranian sub-group under the Indo-Iranian language branch. The modern Persian language is still commonly used within Iran (Iranian Persian), Afghanistan (Dari Persian), and Tajikistan (Tajiki Persian). The former two standard varieties use the Persian alphabet (derived from the Arabic script), whereas, the latter one is written in Cyrillic script.

The earliest Old Persian text discovered was from the Behistun Inscription, which can be dated back to the time of Darius The Great (522 – 486 BC).

Studies have shown that the modern-day Persian language, which emerged around the 8th century, is a direct descendant of Middle and Old Persian with changes to a small extent. Therefore, a person from the 21st century will have no difficulty reading a poem that was written during the time of the Persian Empire.

Finnish is a member of the Finnic group of the Finno-Ugric language family, unlike most of the ancient languages mentioned in this article that arise from the Indo-European family. The history of the Finnic language group can be traced back to 1500 – 1000 BC, with the Birch bark letter 292 from the 13th century being the oldest written document in any Finnic language.

Finnish is now one of the two official languages of Finland, and an official minority language in Sweden. It is also one of the official EU languages since 1995.

To conclude, these are the ten oldest languages in the world that are still surviving to date. Do keep in mind that this ranking is based on what linguists and scientists have discovered. We can’t exactly determine how old a language is just based on these pieces of evidence alone, but they are surely helpful in tracing back to the origin of these ancient languages.

If you want to see the relationship of languages within Indo-European and Uralic language families, you can refer to this language family tree, beautifully illustrated by artist Minna Sundberg.

Which country has the highest number of languages in the world?

It has 851 known languages!

Yes, it is Papua New Guinea!

Lying north of Australia, this country on the island New Guinea, with a population of 8.6 million, has 851 known languages of which 11 are now extinct. Theoretically, it means that there is one language for every 10,238 people on that island!

Since there are 7,102 living languages in the world, the number of languages that are native to Papua New Guinea Island represents 8.45% of the world’s total languages.

The second-most linguistically diverse country, with around 707 languages, is Indonesia which is right next to Papua New Guinea! When combined, that region alone represents almost 22% of all the languages in the world!

However, if you are traveling to those countries, don’t be overwhelmed by these numbers. But instead, appreciate their diversity, tradition, and beautiful culture as much as you can!

How did you like May Thawdar Oo’s blog post “History of the Ten Oldest Languages in the World Which Are Still in Use Today”? Let us know in the comments if you have anything to add, have another content idea for iGaming blog posts, or just want to say “hello.” 🙂