A Complete Primer on Game Localization for 2022 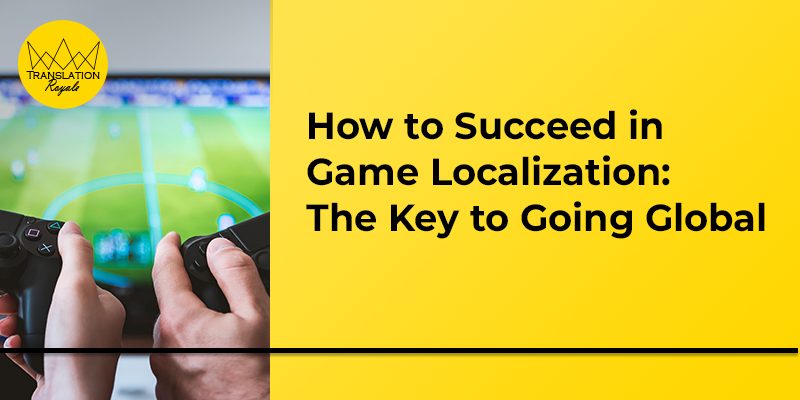 The market for global gaming is booming – and it’s expected to reach heights of EUR 320.2 billion (USD 340 billion) by 2027 at a compound annual growth rate of roughly 9%.

That growth has led to a resulting boom in iGaming. And while the iGaming industry itself hasn’t reached the lofty heights of the former, it sure is getting there fast: industry revenues are expected to reach EUR 123.7 billion (USD 131.4 billion) by 2027 – a CAGR of nearly 10%. That’s nearly half the size of the global gaming industry.

Industry trends predict a continuing influx of new players, representing fresh revenue to be realized as people turn to online platforms to replace their usual pastimes.

The surge was palpable throughout the COVID pandemic, and so were its effects – entirely new, global markets and audiences emerged to propel the industry further during a time of want.

Moreover, the continuing proliferation of mobile devices paired with the constantly available stream of all kinds of gaming apps and the latest technological innovations in the form of hardware and software will further expand the sector in the coming decades.

Other potential paradigm-changing shifts include the rise of play-to-earn, crypto gaming, and free-to-play mobile games that are fast gaining traction.

That’s not to mention the triumvirate of iGaming, esports, and the looming Metaverse, all of which are set to accelerate the development of the global gaming industry into interstellar overdrive.

Research from Macquarie forecasts that iGaming and sports betting could be a EUR 20.2 billion (USD 30 billion) industry by 2030. Meanwhile, the global esports market is expected to clear somewhere around EUR 1.88 billion (USD 2 billion) in revenue in 2022 as esports gains traction in massive, populous, non-native English-speaking markets in Southeast Asia.

So, before we get into the details of localization in the iGaming industry, here’s a quick overview to get you started.

What Is Game Localization?

Game localization is the process of translating game content for global audiences. But localization goes far beyond just translating text and dialogue from their source languages to their target languages; localization entails far more context, sophistication, and nuance than just running texts through machine translation tools.

How to Translate Slot and Video Games: 5 Steps to Localization

The most critical aspects of localizing casino and video games are:

Translation is the primary method of translating a game’s content and characteristics such as background story, game rules, and all the technical information into different languages.

Editing is the process of revising grammatical, contextual, and stylistic errors while maintaining consistent and accurate messaging all throughout.

This is where translated content and elements are embedded into the game, including its code and setting the content up for optimal UI/UX and display.

Every country and region has its own unique context and nuance when it comes to the process of localization, pertaining to how and why certain decisions about the game are made.

For instance, aspiring developers who wish to publish games in China are subject to draconian regulations to not be interpreted as being detrimental to “Chinese unity.” Therefore, video games with references to the country’s wartime past, history, and government are banned.

Hence, video game and slot publishers need to be able to navigate through such cultural and regional sensitivities while localizing their products to ensure that they pass the standards of the markets they wish to enter and refrain from offending cultural sensitivities.

Finally, linguistic quality assurance is the process of reviewing the translated content’s accuracy and appropriateness before publication.

The writing is on the wall: video game localization will be a crucial component of today’s gaming market. Gone are the days of “All your base are belong to us” – back when translation and localization were mere afterthoughts.

“All your base are belong to us,” after all, is quite probably one of the most egregious localization blunders caught on a video game called Zero Wing on the old Sega Genesis/Mega Drive back in 1993.

It was then that the acronym EFIGS – English, French, Italian, German, and Spanish – was coined to denote the core set of languages that games are localized to by default.

On the contrary, game localization is now at the front and center of game development, often being integrated into the gestational stages of development.

Moreover, localization has become an ongoing process just as regular software updates extend game lifecycles with downloadable content. And as we all know, iGaming rules and regulations are constantly updated across different countries (and states!), so we must keep all of the localized content up-to-date to abide by the laws.

There are billions of reasons why your brand should consider localizing.

Localization is, after all, arguably the lifeblood of new business. Games geared towards an international audience need to be localized appropriately.

Southeast Asia, for instance, is a thriving, emerging market with over 400 million internet users, a mushrooming digital economy, and an increasingly mobile-first, young, and dynamic population.

Localization opens up iGaming brands to billions of new players and supports iGaming or esports operators’ goals in furthering their global reach.

There’s no question that the right iGaming localization agencies with professionally-trained linguists and relevant experience in the niche can give your brand an edge as far as providing a full-suite localization service.

Because it’s so easy to get it wrong if you localize with a cavalier approach.

And quite frankly, people won’t play games with themes that they can’t relate to or are unaware of. Consequently, some individuals might just forgo installing games not available in the languages they already speak altogether, or not properly enough to fully immerse themselves in the gaming experience.

Publishers of English-only titles might rule the roost in English-speaking markets but will likely attract a lackluster number of players in non-English speaking countries.

Professional, contextually-relevant localization is a highly painstaking, exacting process that takes time to get just perfectly right – plenty of time and bother could be lost forever because of not remembering the fundamentals.

Localization requires a deep understanding of the target audience’s culture to ensure that the games they play accurately represent their standards, practices, dialects, and values. What’s good for the goose isn’t always good for the gander.

Gameplay, interaction, graphics, and context will suffer from poor localization and might be the harbinger of a flop game. Many times, irony, sarcasm, humor, and pop culture references won’t have an equivalent in the target languages, while quality issues will ensure your game will be consigned into the annals of gaming history.

For instance, iGaming industry-specific terms such as free spins, double downs, and wilds might be localized into unintelligible equivalents in their local languages, when they are generally considered universal terms across languages. Those terms stick out like sore thumbs when a localization effort ends up translating them.

This is where professional fluency, creativity, and a deep understanding of the culture come in to create engaging, compelling game content, particularly when dealing with translation for casino games.

What Aspects of the Game Can We Localize?

Game localization requires the input of the project’s stakeholders, dev team, project managers, linguists and translators, LQA practitioners, translators, editors, and UI/UX experts, among a host of other teams that enable the process.

Let’s take a look at the main aspects that internationalization efforts need to address when dealing with casino and slot games translation:

1. Name of the Game in Local Languages

Are your names culturally sensitive for the markets you wish to target? Cultural adaptation focuses less on the literal meaning, but rather on the intended meaning and emotion with which the message is delivered.

Game apps usually come with helpful descriptions and keywords players look out for. It’s often a great idea to translate such critical points of information for a better player experience. For slot games, these in-game guides are usually about gameplay, special features, payouts and wagering limits.

Does your target language have equivalent casino-related terms, or does it use universally understood technical gaming terms in English? Slot translations and casino translations use specific expressions, and other markets might use other ways to refer to the same thing.

Terms such as RTP, volatility, and stake payout are very commonly-seen terms in slot games, so you need to plan ahead and look for the most suitable phrases in cases when direct translation is impossible.

The goal of localization is to ultimately provide a better UI/UX for players. Making mobile gaming difficult for high-potential mobile-first markets like Southeast Asia might mean leaving money on the table. Make UX a priority for your local players and they’ll always come back.

In conclusion, let’s take a look at 5 game localization best practices to ensure a superior campaign that engages, converts, and delivers:

Localization is an ongoing process that requires extensive planning. For example: What parts of your slot game need to be translated? What assets need to be localized? What timelines and budget are you working with?

Marketing materials are part and parcel of the localization budget, while LQA will tighten up the rest for each market.

Bake Localization into Your Code

iGaming is a very specialized and technical niche; not all translators are equipped with the necessary savoir-faire to navigate through complex gambling and betting terms, regulations, and industry mumbo-jumbo.

Therefore, a superior result is entirely dependent on the linguistic capability of your translators.

For instance, not all German translators might know that they can’t use the term “casino” to promote any products and services on operators’ German-facing websites. An inexperienced translator might do so, and you might end up in unwanted and costly litigation.

Moreover, there is a case of choosing between formal and informal usages for casino terms as well. For example, if we were to translate “Bet now” to Spanish, the formal usage would be Apueste ahora, whereas informal would be Apuesta ahora.

This difference might be subtle in spelling but would mean a vast difference to both the audience and the brand. So it is best to work with professionals who know their clients inside out.

This is where an iGaming localization agency like Translation Royale can help.

A picture is worth a thousand words. That’s why visual assets need to be translated into culturally-sensitive versions suitable to their target markets.

Slot games, for instance, have a myriad of winning and multiplier symbols, as well as theme-related graphics, all of which must be double-checked before the game is released into a new market.

Translation and localization projects aren’t just one-time projects – they are an ongoing process of ensuring every localization data point is on target from start to finish. Therefore, consistency and accuracy are essential.

For instance, how do you want translators to process a certain term, promo, or offer? What if character names are mistranslated or misspelled at different stages of a particular game? What if terms aren’t consistent across all games?

This all leads to a bad experience for experienced players. This is where language quality assurance comes in. Preserving consistency and uniformity is easy by implementing content style guides or project-specific glossaries.

iGaming translation & localization is a time-consuming process – and the process is the literal definition of the axiom “Time is money.”

The window of potential income from games lies solely on the shoulders of their quality, reliability, and UX. A successful localization implementation will open your game to billions of gamers across linguistic borders.

How did you like Sebastian Scheplitz’s blog post “A Complete Primer on Game Localization for 2022”? Let us know in the comments if you have anything to add, have another content idea for iGaming blog posts, or just want to say “hello.” 🙂