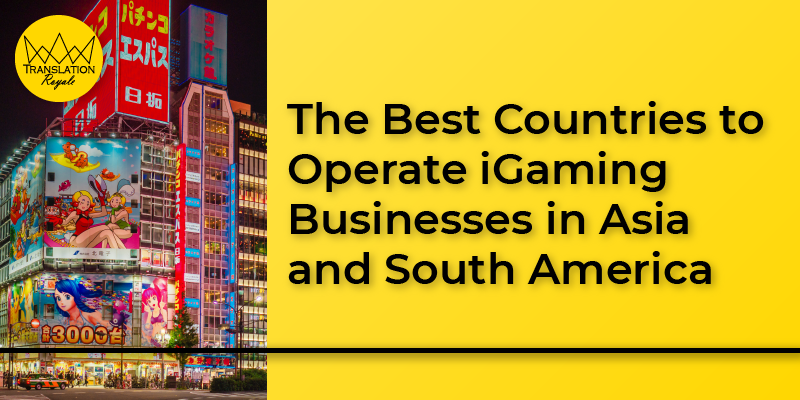 Reading Time: 6 minutes
Author Name: May Thawdar Oo In our previous article “The Best Countries to Operate iGaming Businesses”, we looked at some of the most booming iGaming markets in “the West”.

However, as the phenomenon of online casino games and sports betting continues to gain momentum, we see new promising markets develop in other parts of the world as well – particularly in Asia and South America. First, let’s take a quick glance at this video, and we will dive deep into each country after it.

Many Asian countries have a very deep-rooted gambling culture, and as regulations are becoming more relaxed, iGaming operators are slowly, but surely, establishing a presence in various Asian markets.

Asia has a rich gambling culture and a huge population. And did you know that Macau’s GGR (Gross gaming revenue) tops that of Las Vegas and makes this former Portuguese colony the world’s leading casino capital? Furthermore, some experts claim that the Asia-Pacific region is the fastest-growing market in the world.

Japan emerging as one of Asia’s most promising casino markets

One up-and-coming Asian market is Japan. And albeit the Japanese government is strict when it comes to gambling in general, there are already a few online casinos operating in the Japanese market – although they are factually still illegal. Japan is seen as one of the three last big opportunities in terms of markets – the other two being Brazil and India – so it’s hard to resist the urge to tap into the market as early as possible.

When we say illegal, we mean “grey area”, just like some other markets – Germany for example. In general, one can say that only online sports betting on horse races, bicycle races, motorbike races, and motorboat races operated by the Japanese government are officially permitted.

But since we know how the iGaming industry works, if it isn’t regulated, there are ways around it. Among the online casinos offering offshore gambling in Japan, some companies are already in the pole position like Wunderino, Lucky Niki, Casitabi or LeoVegas. They are the competitors for you to analyze if you want to enter the Japanese online casino market.

Due to Japan’s strict regulations, operators need to customize the game selection and make sure that products are thoroughly localized for the Japanese market.

Moreover, Japanese is one of the hardest major languages and localizing for it is a balancing act. Different levels of formality and lots of room for personal taste make it very difficult to please everyone – unlike easier and more forgiving languages like English.

The country’s known for its conservative approach when it comes to gambling and for a long time only a few “socially acceptable” games were allowed. Japan is a peculiar market in the sense that there weren’t any western-style casinos in the country up until just a few years ago, but about 20,000 gambling halls offering so-called “skill” games – mostly Pachinko.

However, a few years ago, Japan finally legalized casino gambling and gave companies like Las Vegas Sands Corp. and MGM Resorts International permits to build casino resorts in the country. The first Japanese casino resorts are expected to open their doors in the mid-2020s, and experts are predicting a very bright future for the Japanese casino industry.

It’s mention-worthy that the Japanese government has imposed a mandatory entrance fee of $74 for players to enter land-based casinos. And this could, of course, serve as an incentive for Japanese players to seek out online casinos instead.

To sum it up, the projections for the Japanese casino industry are very promising. Experts are expecting Japan to give Macau a run for its money and become the world’s second-largest casino market and online gambling will most certainly get a share of this revenue.

One of the main verticals you want to look into is computer/console games. Games like League of Legends, Dota 2 are not popular in Japan though. And here’s the biggest take away: eSports teams are not a thing in Japan since paid gaming competitions are illegal. Which feels weird, since the next-door neighbour Korea is very big with eSports.

Advertising for online gambling in Japan is not allowed either. Which means that players need to find the necessary information online – significant Japanese iGaming content that ranks well on Google will definitely give you the advantage here.

What you need to do is be polite and understand your Japanese customers’ needs, make them understand how bonuses, gambling and betting work, and occasionally target them with manga-like topics if it fits your brand. But remember, the Japanese have a slightly different taste, so you might even have to reinvent your brand:

iGaming finding a foothold in India

A few quick Google searches will quickly show you that an increasing number of operators are eyeing the Indian iGaming market. And with a rich gambling culture, and being the world’s second-largest population, India is undoubtedly a thriving Asian iGaming market with exciting prospects.

Furthermore, Indians are sure to welcome regulated and established operators due to the high number of scammers on the market. Luckily for Indian players, the government is quite lenient when it comes to gambling regulations, and cash games are allowed in most states.

Now, as is often the case, regulations in India for cash gambling have grey zones. Legally, Indians are only allowed to play games that rely on skill rather than chance. And determining what games fall into this category is easier said than done. That said, operators might be more likely to offer table games like Roulette and Blackjack rather than slots. And sports betting is, of course, a given.

As it stands now, this up and coming market seems to be mainly geared towards table games and live casino games.

Gambling has broken new grounds in Brazil in recent years – so much that there have been talks about Brazil becoming an international gambling jurisdiction. Chances are, operators might set up shop here in the future.

Not unlike the countries we’ve already mentioned, Brazil has a very vivid and unique gambling culture. The country’s particularly known for its Jogo do Bicho – a highly popular lottery-style card game that’s still illegal in most states.

As a matter of fact, all gambling activities except national lotteries and horse racing are still illegal in Brazil, but that’s rapidly changing. The country’s long-lived gambling prohibition hasn’t managed to stifle the Brazilians’ love for gambling, and apart from Jogo do Bicho, Brazilians spend fortunes in illegal slot machine halls and on bingo and video games. Just Jogo do Bicho alone is estimated to generate around $500 million every year.

“Legalized gaming in Brazil is irreversible and inevitable”

In recent years, the Brazilian Institute for Legal Gaming, Instituto Brasileño de Juego Legal, has initiated talks with the Congress, in hopes of eventually seeing a fully legalized and regulated gambling market in the country.

These talks have evidently borne fruit as Brazil’s currently in the process of having gambling legalized, thus giving iGaming companies access to the fifth largest country in the world as far as population is concerned.

As it stands now, things are looking particularly promising for the sports betting vertical. The Federal Government was expected to deliver finalized regulations for sports betting last year, but that didn’t happen. There is, however, already a framework in place, as the enactment of Federal Law No. 13,756/18 was published in December 2018.

This law was the first step towards the legalization of gambling in Brazil, and the law clearly stipulates what taxes and fees will be applied to gambling companies wishing to operate in the country. What’s interesting about this law is that online providers will only have to pay half the tax land-based operators are obliged to pay.

However, since the initial draft of Law No. 13,756/18 was published, the draft Presidential Decree has suggested lower taxes, as Brazil’s current rates are significantly higher than those of other gambling jurisdictions.

Changing the tax rates would, of course, mean an amendment of the law. And perhaps that’s why things are stalling a bit. Nonetheless, Brazil is well on its way to a fully legalized gambling industry with potentially lucrative prospects for iGaming companies.

We can’t stress the importance of localizing your content enough. And that’s especially true when you plan to enter markets in other parts of the world.

Albeit there are plenty of cultural differences to consider between European countries, such differences might become even more pronounced when countries are separated by vast distances.

These cultural differences certainly need to be localized into the written language, and you need to make sure you address your audience in an appropriate and culturally familiar way.

For instance, in Japan, it’s considered rude to address people using their first name – something that Western companies commonly do as a way of breaking the ice and making e-mail and text messages feel more personal.

Another interesting thing to consider is that Indians use words like “please” and “thank you” a lot less than Western countries, as they’re considered to create an excessive level of formality that can even be considered rude at times.

At the end of the day, it’s peoples’ ability to relate to your content that will determine how impactful your message is. And that’s why being aware of cultural nuances, and having your content properly localized make all the difference.

How did you like May Thawdar Oo’s blog post “The Best Countries to Operate iGaming Businesses in Asia and South America”? Let us know in the comments if you have anything to add, have another content idea for iGaming blog posts, or just want to say “hello.” 🙂