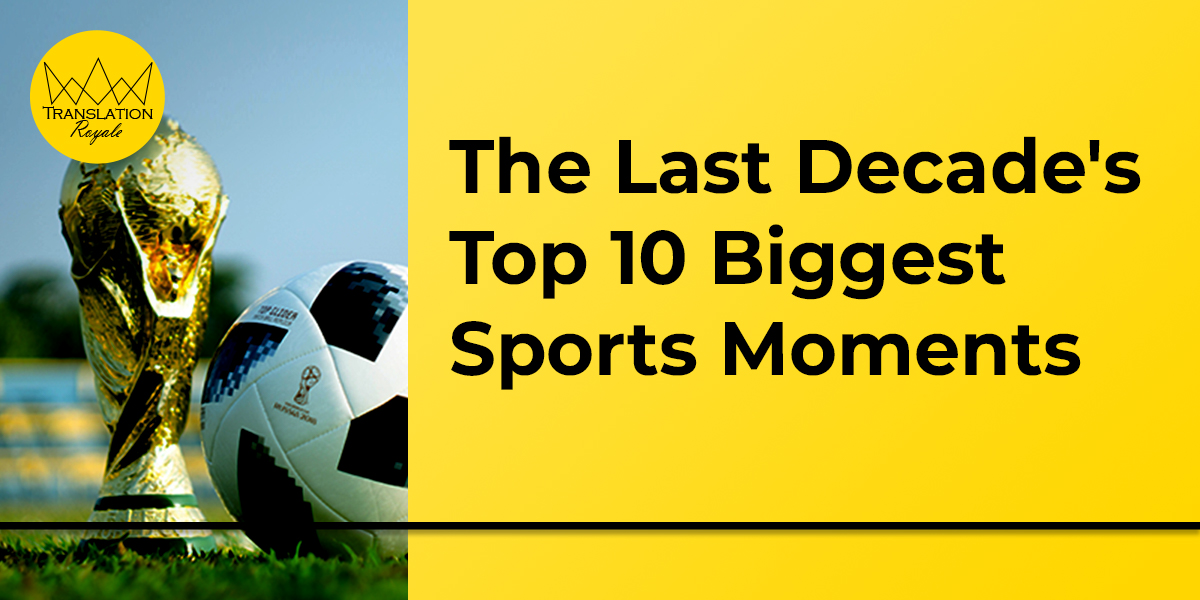 We’re about midway through the new decade as we write this, and just fresh off the heels of the Tens. And, this decade is packed with truly memorable moments in sport.

Sport, whether in front of a live audience or behind closed doors, is filled with captivating stories of inexpressible triumphs, losses, trials, and tribulations that can’t be recreated elsewhere. This is why sporting events present great content opportunities for online casinos, bookies, and iGaming brands alike.

We’ve put together a list of the most memorable sports moments of the 2010s. There are a lot more sports moments that didn’t make the cut, but these ones were the undoubted standouts.

The 2011-2012 English Premier League season was one for the books for Manchester City F.C. and its fans. They capped off a sensational year by winning the league in one of the wildest and the most dramatic finishes – leaving it late for their victory goal at literally the very last second of stoppage time.

City and their bitter cross-town rivals Manchester United were locked in a dead heat for the Premier League title. All City needed to do was to beat the lowly Queens Park Rangers to win their first title in 44 years. But as we all know, City was at the edge of bungling their championship pursuit by losing 2-1, until Edin Dzeko leveled the score at 2-2 at the 90th minute.

Hopes were close to being snuffed out, with Rangers happy to play the spoiler. But at exactly 93 minutes and 20 seconds, City legend Sergio Aguero drilled in a scintillating goal to wrap up the closest championship race in the last three decades, cementing their position at the head of the table of English football for the foreseeable future to this very day.

City won its first league title by goal difference in the dying seconds of stoppages thanks to Aguero’s strike – by the skin of their teeth, and just in the nick of time. And this goal was the only way City could win the league as their points were on par with United.

To this day, the iconic ‘Agueroooooooo!’ moment is still talked about by the blue side of Manchester, which has gone on to achieve unprecedented successes since 2012. And we dare say rightfully so.

July 8 is a date that will forever live in infamy as the “Mineirazo” – which remains the most shocking international match of the decade.

The Mineirazo saw a banged-up Seleção get a whipping from Die Mannschaft on their own home soil with 7 to 1, in an absolutely shambolic performance from the home-crowd favorites (and a professional dismantling at the hands of the visitors).

Germany went on to win the World Cup that year after soundly outplaying Argentina in the finals. It was indeed cold comfort for the 204 million Brazilians who endured the spectacle. Oh well, at least it wasn’t the Argentinians…

Game 7 of the 2016 NBA Finals was one of those deals where something unprecedented would have happened regardless of the outcome.

You either had the 73-9 Warriors who capped off the greatest season in history by unseating Michael Jordan’s 72-10 Chicago Bulls of ’96, or the Cleveland Cavaliers who made the craziest comeback the game had ever seen winning their first-ever title.

The stakes couldn’t have been higher – and plays leading to the conclusion were nothing short of epic. This includes LeBron James’ “the block” when he allegedly reached 32.3 kph (20.1 mph) in transition and leaped 89 centimeters (35 inches) high to block Andre Iguodala’s shot.

The game was tied at 89 apiece, heading towards the dying seconds when Kyrie Irving hit the dagger that broke the tie and the series. This was then followed by LeBron hitting one more free throw, winning the Cavs their first and only championship to this very day.

Everyone knew that the Lakers would not hang up the sneakers without making some statement no matter what happened.

And that was precisely what Kobe did when he hung 60 points on the Utah Jazz in what was to be the icon’s swan song – making Kobe the only player to punctuate his career with a 60-point outburst.

It was a fitting end to Kobe’s illustrious career, and the performance could not have matched the tributes and celebrations of his final game better. It’s the kind of classy, graceful exit deserving of a true legend – the greatest Laker ever.

Leicester City’s improbable moment didn’t play out in just one dramatic game, but throughout the entire 2015-2016 English Premier League season – a competition where “equity” among teams is ridiculous and a select few clubs call the shots.

The odds reflected what the pundits and bookmakers thought about the Foxes’ chances of winning the Premier League, which was anywhere between exceptionally slim to nil. In other words, this was a team tipped to not even survive the relegation drop, much less win a championship.

We all know how that played out – and the 2016 Leicester City team became the most sensational story out of the U.K., not just within the last ten years, but for all time.

The clash between Chelsea and Tottenham at Stamford Bridge on May 2 was for all the marbles: if Spurs dropped points, the Foxes would win the title. A couple of second-half strikes from Blues legends Gary Cahill and Eden Hazard sealed the title for the Foxes, and the rest was history.

Leicester came from just barely eking out a heroic finish to survive relegation a year after being promoted to the Premier League, to winning the most coveted prize in the English game a year after – against all odds.

6. Chicago Breaks the “Curse of the Billy Goat” at the 2016 World Series

108 years of misery boiled down to a decisive Game 7. Constant lead changes, heart-stopping plays, and a scrappy game that ended in extra innings. Two historic teams with long-suffering, dedicated fanbases. The narratives practically write themselves.

In hindsight, the “Curse of the Billy Goat” could only have ended – or continued – in this spectacular way. The curse was said to have been “cast” when Cubs fan and Billy Goat Tavern club owner William Sianis was not allowed entrance to Game 4 of the 1945 World Series along with his pet goat Murphy, which had been bothering patrons.

Sianis was alleged to have shouted “You are going to lose this World Series and you are never going to win another World Series again,” in disgust, and it was understood that the Cubs would never win a World Series until the goat was invited back to Wrigley Field again.

The Chicago Cubs dropped Game 4, a defeat that evened the series at 2-2. The Detroit Tigers eventually won the championship in seven games and “The Curse of the Billy Goat” was born.

But they sure broke the curse in style. And with a memorable, gutsy, and drama-filled victory capped by clutch late-inning performances from Ben Zobrist and Miguel Montero (along with some superb baserunning from Albert Almora and Anthony Rizzo), the Cubs put an end to 108 years of agony by winning their first World Series since 1908.

The Camp Nou is no stranger to comebacks – but the most sensational one came about the last decade against Paris Saint-Germain last March 8, 2017.

The Parisians were riding on a wave of euphoria after having trounced the Blaugrana 4-0, which all but effectively doused the Catalans’ hopes of ever winning the tie. PSG is a perennial contender, after all. Not even the vaunted assemblage of Barça’s talent could overturn the tie and score five goals without letting one in, or could it?

Well, the sporting world probably shouldn’t have planned the funeral before the body died.  Because the Catalan juggernauts answered back with the victorious performance of a lifetime and a tie at the 95th minute after a Sergi Roberto finish (and a Neymar stoppage-time penalty).

Of course, there have been more dramatic comebacks in Champions League history, but not by an insurmountable margin like the Blaugrana faced. And definitely not in the last ten years!

8. The “Philly Special”: The Philadelphia Eagles Win the Super Bowl

Sometimes, winning a championship is all about timing. And boy, did everything click for the Philadelphia Eagles during the 2017 postseason, when the franchise won its first Super Bowl.

This all thanks to the heroics of the eventual MVP, Nick Foles – capped by the unforgettable “Philly Special” during the first half against the New England Patriots, the defending champions and the crowd’s favorites.

Philadelphia was, like Leicester, considered an outsider to even win at all – but thanks to some shrewd, bold moves by the Eagles front office and the decisive action to bring in Nick Foles, it all turned around for the franchise.

The 2010s weren’t exactly encouraging for Tiger Woods – an unfortunate sex scandal sent his marriage into a tailspin and permanently tarnished his image. Then, midway through the decade, injuries left him barely able to play, and the results were evident on the green.

As the legendary basketball player and coach Rudy Tomjanovich once said, never underestimate the heart of a champion. Lo and behold, just when the game had appeared to pass him by, he came back towards the end of the decade, with the pinnacle arriving during the Augusta National.

Woods masterminded an improbable rally to win the Masters from behind, finishing 13 under par – one stroke ahead of the competition. It marked Woods’ 15th major championship, the first for the 43-year old since 2008. He still has it.

10. The Most Shocking Upset Of the Decade in Boxing

Once upon a time, the heavyweight division of boxing held massive clout in the sporting world. However, in recent years, many conceded that some of the shine has come off.

Boxing’s once-glamorous division was dour for a long time until the new generation of heavyweights – Tyson Fury and Anthony Joshua – sparked mainstream interest once again.

But without a doubt, the most astonishing upset of the decade in boxing had to be Andy Ruiz Jr.’s appalling seventh-round TKO against highly-touted Anthony Joshua at the Madison Square Garden last June.

Ruiz Jr. was a little more than a substitute who stood about a snowball’s chance in hell against the overwhelmingly favored Joshua, and yet he catapulted himself into boxing lore and went on to win the WBA, IBF, and WBO titles.

Joshua reclaimed the belts later in December that year, but Ruiz has turned himself into this decade’s version of James “Buster” Douglas, cementing his legacy forever.

Every sporting event is more than just a business opportunity for sportsbook brands to attract new customers via bets and odds; it is an effective vehicle for content marketing when done right.

And this list of historic sporting events during the last decade is proof positive for the immense reach (and the emotional connection) that these events have on a global scale. Be sure to use them wisely to your advantage.

How did you like Sebastian Scheplitz’s blog post “Ten for the 2010s: The Last Decade’s Top 10 Biggest Sports Moments”? Let us know in the comments if you have anything to add, have another content idea for iGaming blog posts, or just want to say “hello.” 🙂