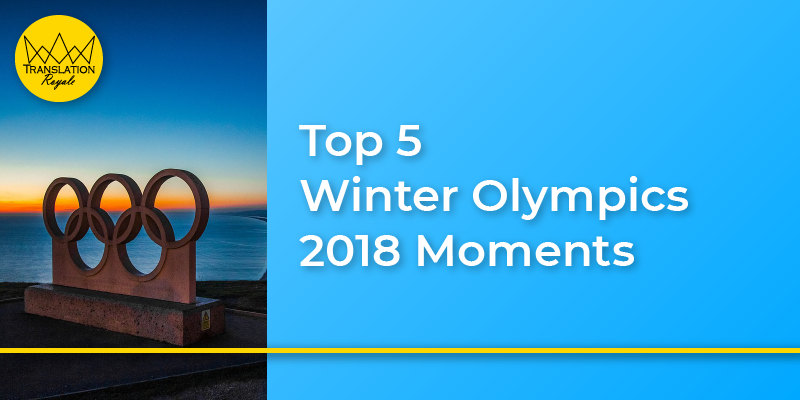 Reading Time: 3 minutes
We waited 4 long years for it. And, just like that, the Winter Olympics 2018 has whisked past us almost faster than you could even notice those speed skaters zooming past in their crotch design uniforms.


Certainly not a Winter Olympics to disappoint, PyeongChang 2018 had its fair share of tears, laughter, joy, and drama.

Here are my picks for top 5 Winter Olympics 2018 moments:

It takes Superman-like guts of steel to step out in below-freezing temperatures in nothing but a ta’ovala and a smearing of oil as the only representative of a country that’s most likely never actually experienced snow. (Not to mention, to do all that with a beaming smile.)

But that’s exactly what Pita did at the PyeongChang 2018 Opening Ceremony. And that was despite telling the media prior to the event that he wouldn’t be reprising his show-stopping role as the topless Tongan from the 2016 Rio Olympics.

“I want to still be alive for my race. It’s going to be freezing, so I will be keeping nice and warm,” he said.
Well, he sure pulled the wool over our eyes with that one at least. Nice one Pita!

Amid long-running tensions between the 2 Koreas, differences were put aside (at least temporarily) when North and South Korea marched under one flag at the Winter Olympics 2018 Opening Ceremony.

In a symbolic move, the 2 countries’ athletes entered the PyeongChang Olympic Stadium together hand-in-hand, marching under the Korean Unification Flag. The flag depicts the entire Korean peninsula as one nation.

Tensions between the 2 countries took a backseat again at the Winter Olympics 2018 when the joint Korea women’s ice hockey team made their debut. It marked the first time in history a joint Korea team has taken part at the Olympics.

The 2018 Winter Olympics wouldn’t have been a major sporting event without one of the biggest match-ups in recent history.

Of course though, after having only recently traded insults like “mentally deranged”, “dotard” and “a rogue and a gangster”, it didn’t take all that long for people to catch on that they were (almost convincing) impersonators.

North Korea’s over 200-strong ‘army of beauties’ created a worldwide sensation thanks to their perfectly in-sync cheerleading routines.

Rugged up in red parkas, the North Korean cheerleaders gained celebrity status during their routine at the unified Korea women’s ice hockey match against Switzerland in Gangneung on 10 February.

Unfortunately though, despite their “Cheer up!” chants of encouragement, their team lost 8-0.

A gold medal has to go to figure skater Yura Min for making a brave comeback from her wardrobe malfunction during her Olympic debut at the Winter Olympics 2018.

The South Korean-US national was only seconds into her routine with partner Alexander Gamelin when the hook of her top came undone, threatening to put more than just her performance on show for the world to see.

But instead of panicking like a deer in headlights, Min bravely continued with her performance by improvising as she went along to stop her top from slipping off her shoulders.

Social media audiences around the world applauded her for recovering from her near-disaster wardrobe malfunction “with class”.

Luckily, Min managed to finish her routine with her outfit still intact. Her and her partner placed ninth out of 10 teams.