Featured Snippets: Everything You Ever Wanted to Know (in Nearly Under 5 Mins) 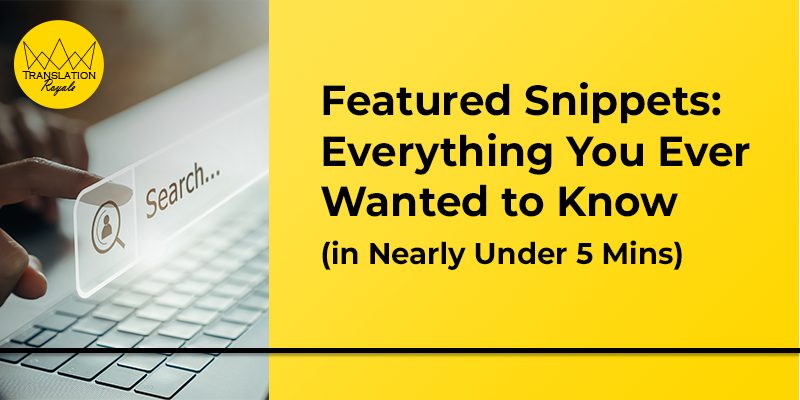 Google estimates that the CTR for paid ads is around 8%. Sounds okay, right? Not when you compare it to 8% CTR for featured snippets – and they’re completely FREE.

But hold on, we’re getting a bit ahead of ourselves here. What precisely is a featured snippet?

Check this video out to find out!

Precisely What a Featured Snippet Is

Featured snippets are the answer to a query found above organic search results, firmly on top of the podium in position zero.

The search engine giant Google defines them as “special boxes where the format of a regular search result is reversed, showing the descriptive snippet first.“

And what’s the deal with featured snippets vs rich snippets battle?

Well, rich snippets are the stunted younger brother equivalent of featured snippets; less prominent, slightly underachieving, and with a lower CTR of its older sibling alternative but can offer a bolstered organic search result.

This is an example of a video rich snippet, but they come in all different shapes and sizes.

Great, so we kind of know what the difference in how they look is, let’s get back to the main topic.

The Many Splendored Featured Snippet

If there were just one type of featured snippet, it’d be too easy. Just to make this that slightly less attainable and therefore more desirable, featured snippets come in one of three shapes and sizes:

A paragraph featured snippet appears in this form:

While a table featured snippet takes on this guise:

Featured Snippets. What are They Good For?

Absolutely loads of things. Established in 2014, SEO for iGaming content marketers has never been the same since.

Raising the online visibility game to stratospheric heights, featured snippets should be the top of your iGaming content marketing strategies.

Why You Should Be Using Featured Snippets

The SEO bods down at Ahrefs analyzed over 2 million featured snippets (must have been a quiet day in the office) and concluded that a featured snippet gets no more traffic than a humble organic 1st ranking result.

Then why are you even reading this?

There are also another couple of good reasons why your business should be flying the featured snippet flag.

Foolish be the iGaming business that overlooks the importance of voice search. Most recent data shows that close to 50% of searches were of the vocal persuasion in 2020 with this figure set to increase.

With mobile voice searches leading the pack of answer-based queries, this kind of search is ideal for returning a featured snippet from voice searches.

As an iGaming veteran, you’re more than aware that there are a few shady operators out there; unlicensed, unregulated, and unconcerned about the way they present themselves to their readers. To differentiate between yourself and them, you need your operation to look the part.

Owning a featured snippet for a popular search query positions your business as one with added trustworthiness, knowledge, and, most importantly, relevance. Featured snippets are a great way of securing your reputation as the go-to source in the iGaming niche.

Businesses that own the most featured snippets are online behemoths including:

For a user, it’s almost a given that featured snippets are from a trusted source and will therefore boost your CTR while making you look professionally fabulous.

Enough Already, I Want in. How Do I Optimize for Featured Snippets?

It looks as though you’re now ready to scale the most crucial peak of all: how to optimize iGaming content for featured snippets.

At Translation Royale, we like to make things easy for you. If you have a manicured moustache, wear vintage dresses or exclusively drink craft beer from a little-known microbrewery, you probably call it a brain hack. The more common, less pretentious name is a mnemonic sentence.

If you ever muttered Every Good Boy Deserves Football to yourself in music class to remember treble clef notes or mumbled Super Heroes Must Eat Oats to recall the names of the five Great Lakes, you’ll know where we’re going with this. (Superior, Huron, Michigan, Erie, Ontario, in case you were wondering.)

It’s a fact. Ask any keno player (if you can find one). So, one simple yet admittedly slightly bizarre sentence. Who would have thought that featured snippet SEO for iGaming content marketers could be so easy?

When you’re getting into the nitty-gritty of keyword research, aim for answering questions that the majority of your intended audience is searching for.

Most keyword research tools come fully loaded with a “Questions” tab that once clicked will magically filter these results only.

Usually found under a featured snippet, the “People also ask” is a top way of gaining insight into related questions, and integrating these into your content is a smart way of giving your featured snippet strategy a head start.

4. Rank on the First Page of Google

Well, at least try your best. If you’re on page 1, you could potentially snap up the featured snippet. 34.07% of featured snippets are pulled from page 1 Google results.

So, brush up on your on-page SEO tactics to have a fighting chance to be featured on Google’s premier results page.

This comes on the first day of journalism school. When creating structures, be it for blogs, landing pages, game descriptions, or promotions, strive for the inverted pyramid structure. It looks like this:

6. Words That Are Used in Featured Snippets

Did you know that there’s a complete list of the most commonly used words in featured snippets? Well, you do now.

Shoehorn in as many of these words as a part of your overall keyword strategy or your needs-specific featured snippet strategy and you’re already standing head and shoulders above the competition.

The most commonly used words found in featured snippets are as follows (DO THIS):

While avoiding these words (DON’T DO THIS):

Previously in our article, we briefly popped in to say “Hi” to the different formats that appear as featured snippets. Ensure your content fits into either a table, list, or paragraph.

Ideally, you’re looking at presenting items that are useful and skimmable. A match made in SEO heaven.

SEO managers like Q&A pages, not only because they’re actually very useful for the reader, but they also serve as a cornerstone for informative content and should be a part of every piece of viable content.

SEO Managers also like Q&A sections (and FAQs) because these chunks of content are already customized to accurately display in featured snippets.

By highlighting questions that players really want to know the answers to, you’re already at the casting call and on your way to featured snippet stardom. SEO for iGaming content marketers Just got the Hollywood makeover.

Many herald the featured snippet to be the biggest SEO development of the past 10 years.

And for this reason alone your iGaming business needs to reflect the massive impact featured snippets have on brand exposure, overall online visibility, and boosting CTR.

The importance of featured snippets for the iGaming industry is one that has so far been overlooked by many iGaming businesses that are still doing their damndest to occupy position 1 on Google.

If you’re still deliberating over the benefits of featured snippets vs rich snippets, then don’t be. The answer is simple: why not do a bit of both?

How did you like May Thawdar Oo’s blog post “Featured Snippets: Everything You Ever Wanted to Know (in Nearly Under 5 Mins)”? Let us know in the comments if you have anything to add, have another content idea for iGaming blog posts, or just want to say “hello.” 🙂