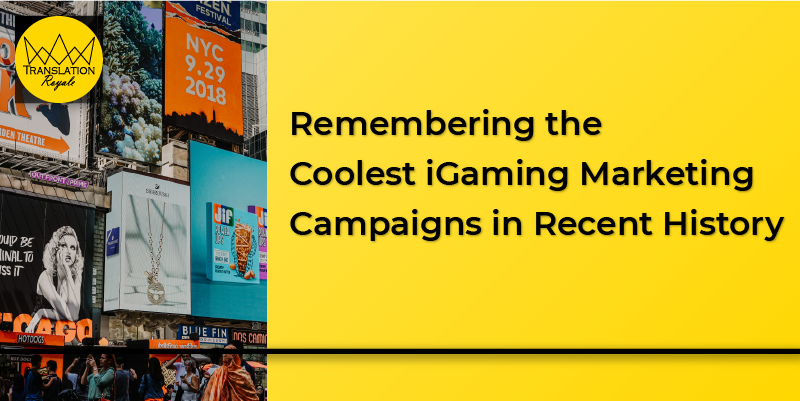 The iGaming vertical is one of the most competitive businesses in today’s fast-paced marketing environment.

With a myriad of options that are available for experienced, novice, and prospective customers alike, iGaming companies need a whole lot more than just offering a slew of new games and promotions.

It also goes above and beyond just mere search engine optimization, too.

Granted, adding a wide array of gaming options and plenty of titles is always a huge positive for iGaming operators seeking to expand their clientele. But it’s not the sole deciding factor that will attract and retain new customers.

The same is true for SEO. It’s more than just improving the existing content and carefully optimizing messaging to suit their needs.

That’s why iGaming companies have always searched for innovative and downright outrageous ways of promoting their brand to differentiate themselves from the competition. And, in doing so, attract press coverage, as well as the attention of new customers.

Let’s see what are some of the coolest and most daring marketing and PR stunts that bookmakers and online casinos have employed recently in this video:

Now that you have a good idea of what these campaigns are, let’s take a closer look at them.

The Irish bookmakers have a penchant for making the headlines with their provocative and entertaining campaigns.

While opinions remain varied on their advertising methods, they undoubtedly succeed in generating mainstream buzz and build their customer base with each one.

As is customary for most clubs, they released their 2019/2020 kit for their Championship campaign. It featured the Terriers’ traditional blue and white stripes with a large, loud, and large (we really can’t stress it enough) Paddy Power logo strewn across the front.

True enough, it generated buzz. Or rather, a swarm of negative press – mainly because it looked like a sash for a beauty pageant. Regardless, the club was unfazed and debuted the new kit at a friendly against Rochdale – to the chagrin of football fans worldwide.

It was eventually revealed that – surprise, surprise – it was all a marketing ploy to generate enormous hype about Paddy Power’s first kit sponsorships.

Just a few days after the initial furor, Paddy Power announced that they were not only sponsoring Huddersfield’s shirt, but they were also unsponsoring them – giving it back to the fans.

It was a surefire way to create enormous hype about the Irish bookmakers’ first-ever shirt sponsorship.

They evoked a message that sponsors have run roughshod on club shirts, and that the club shirt should be given back to the club’s supporters.

2018-2019 Premiership winners Manchester City and lesser clubs like Scotland’s Motherwell followed suit. It was that good, and it was representative of how iGaming companies ought to be creative with their marketing.

One of Betfair’s recent campaigns, launched in 2019, saw the UK-based iGaming company return to its core competency with a campaign that promotes its Betfair exchange program to early adopters and total newbies.

With the help of Clive Owen’s fine acting skills and clever plots, these ads aim to educate customers about the complex machinations of exchange betting, such as how to use the exchange and how to make their own odds.

They ran the campaign over Betfair’s online channels and social media, as well as its more traditional ones, such as television and radio.

The campaign lays down a marker for Betfair, whose ad spend will now focus on digital, instead of running their advertising during live sport.

Furthermore, it seeks to lower the barrier of entry for peer-to-peer betting by featuring an e-learning hub of sorts to teach customers how to use Betfair’s robust exchange betting platform – the same one that has made it stand out against the competition.

This goal of educating their customers is integral to the company’s strategy of reaching more knowledgeable and analysis-driven punters, who study as much information as they can about a match before placing a bet.

For Betfair, a brand-led approach to advertising and bringing its customers on their digital journey will help their flagship product stand out in an increasingly cutthroat market.

Another amazing stunt from Betfair was their “Betfair – World’s Biggest Billboard” campaign in 2008 which Translation Royale’s CEO Sebastian Scheplitz was part of.

Securing the Guinness World Record for the World’s Largest Advertising Hoarding, the bookie platform has been grabbing the attention of football fans flying into Vienna Airport for the closing stages of EURO 2008. More than 1m passengers saw it on their approach into Vienna during June 2008.

Covering an area of more than 1,380m by 316m – or 50 football pitches, Betfair had different kinds of plants spell out the message “NO.1 FOR FOOTBALL AND STILL GROWING!“.

Betsafe, former UFC champion “The Notorious” Conor McGregor’s sponsor, entered the headlines in 2017 at the height of the latter’s feud with undefeated boxing champion Floyd Mayweather Jr. It was a highly publicized and lucrative event that culminated in a 10th round TKO victory by Mayweather and made over $600 million in total revenues.

Betsafe rebranded a private jet as McGregor’s official airline, aptly named “Notorious Airways”, to align it with the Irishman’s moniker, as well as his public persona and colorful ways. It featured a memorable pre-flight “safety” video where McGregor is shown laying down the airline’s sham regulations and policies.

Betsafe’s partnership with McGregor also saw the sportsbook’s branding appearing on the Irishman’s trunks and a variety of activities to bring its customers in contact with the former UFC champion.

The partnership also offered a wide array of special betting offers pertaining to the Irishman’s fights at the same time.

Talk about elevating the stakes – this campaign surely did!

UK-based high street betting chain William Hill is one of the trailblazers in the iGaming sphere. One of the more recent campaigns it embarked on reflected its initiative to position itself for the iGaming industry’s increasingly digital and regulated future.

“It’s Who You Play With”, the company’s first campaign with multi-award-winning advertising agency 72andSunny, sought to increase excitement, and give a jolt of energy for the brand.

William Hill aimed to shake off the negative stereotypes that revolve around gambling and hone its advertising with this campaign, which is centered around the interconnectedness that sports betting brings across social groups.

And it succeeded in doing so through a variety of assets that pushed the campaign across channels to show the social aspect of betting that brings people together.

All in all, the campaign served to emphasize the brand’s status as a modern, premium, yet accessible, while dispelling the stereotype of gambling as a reclusive pursuit that leaves bettors isolated and withdrawn.

It was an appropriate response from the bookmaker that further drove engagement and solidarity with its customer base, which disliked the way they are portrayed in marketing materials.

In the end, “It’s Who You Play With” was a well-received campaign that communicated its customers as real people, not as degenerates, nor in the caricature-like way that they had been portrayed over the years. It also served to elevate and reposition their standard of advertising, and their brand, alongside it.

This stunt sought to drum up interest for the year’s headlining sporting event – the 2014 World Cup held by the host nation at the time, Brazil.

At the time, Australian punters were said to have had little interest in betting on the World Cup because the young and inexperienced Socceroos were not fancied to get out of the group stages.

Especially not after being drawn into a group featuring the likes of the then-defending champions Spain, eventual 3rd-place finishers Netherlands, and perennial contenders Chile.

In response, the Aussie bookmakers flew the 46-meter high balloon with a 41-meter wingspan over Melbourne, one of the biggest hot air balloons the city has ever seen – wearing the green and gold colors of the Socceroos with the hashtag #KeepTheFaith.

A gimmick like this will never be without controversy, especially considering its religious undertones. But, more often than not, controversy creates cash – and the mere fact that people still remember it many years after the World Cup suggests that it was a success.

Standing Out From The Crowd

iGaming brands are fighting tooth and nail to stand out from each other.

Granted, there are still plenty of iGaming brands that are firmly entrenched in their traditional ways, which include over-relying on direct responses and constant hard selling to their customers. There are also some that are over-reliant on PR stunts for the sake of it, without much ado to set themselves apart from the pack.

But the recent trends we are seeing from iGaming operators like William Hill, Betfair, and Paddy Power represent why an emotional appeal to customers is crucial to building a brand affinity instead of using the traditional direct response marketing that most have employed throughout the years.

After all, their customers have been so used to the prevailing bland and rational approaches that focus on special offers and improved pricing that lacks emotion and distinction from other brands.

Innovation doesn’t have to be labored or expensive. There are more ways for iGaming companies to differentiate themselves from the competition without having to break the bank.

It can be as simple as developing a robust content strategy that is driven by data and powered by well-executed SEO, such as implementing a keyword strategy that answers your customers’ needs, wants, and concerns.

We’ve done it many times before – and we’re confident that we will do the same for your brand.

And in case you want to step it up a notch, our sister agency WeGotGame will help you with creative iGaming marketing campaigns, video production, and anything beyond.

How did you like Sebastian Scheplitz’s blog post “Remembering the Coolest iGaming Marketing Campaigns in Recent History”? Let us know in the comments if you have anything to add, have another content idea for iGaming blog posts, or just want to say “hello.” 🙂