7 Times Cartoons Were Changed in Other Countries 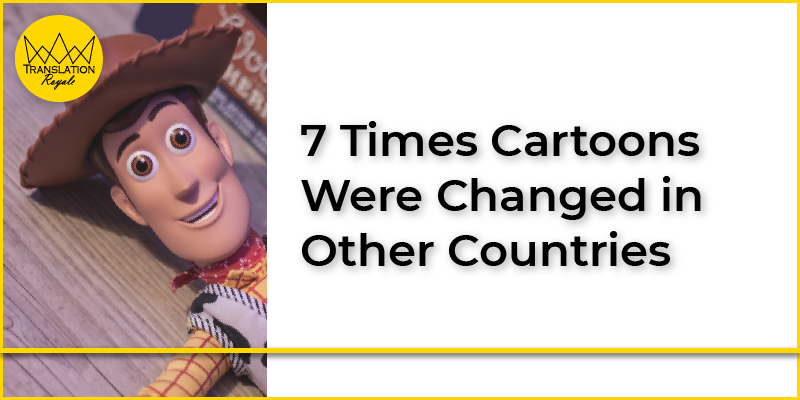 Reading Time: 3 minutes
We are used to watching movies a certain way. And most of the time we don’t think about how different other cultures are used to enjoy their cinematographics.

In Iron Man 3 some extra four minutes of Mongolian muscle milk and Tony Starks meeting kids where added for China. Black Panther had a key action scene filmed in Busan, South Korea. The film took $25.3m (€20.4, £18m) in Korean cinemas during its opening week – more than anywhere else outside the US. It does make sense to localize.

The genre where it’s easiest to amend certain details is animation – think Pixar and Disney. Below we’ve found seven occasions where such changes have been made.

There’s a scene were Riley refuses to eat broccoli. This didn’t make sense to Japanese viewers, as kids over there usually like eating this type of veggies. That’s why the according to David Lally from Pixar they replaced broccoli with green bell peppers that is apparently hated by kids there.

In another scene, some action takes place in Riley’s head. In the US version, he enjoyed watching a game of ice hockey, a sport that doesn’t work in most other countries. Sorry Canada, Sweden, Norway, Finland, Russia and some others, the world loves its football. That’s why it had to be replaced with just that – a game of football (or soccer depending on where you’re from).

All in all, there were a total of 28 graphics across 45 different individual shots which were localized. As localization is also a matter of language, there’s a scene when Bing Bong spells out the word “Danger” moving his trunk from left to right as people in the Western world would. But when they translated the word into other languages they made the effort to reanimate his trunk so that it moves from right to left in languages where this is the right direction.

In the US version, Randall bakes cupcakes, which he decorated with letters spelling out “Be my pal”. Instead of finding new translations for each language, they decided to opt for smiley faces. Which then even worked for the next scene.

When Mike bumps into Randall while riding Archie the Scare Pig, some cupcakes stick to his face, forming the word “lame”. This was impossible to translate while keeping the meaning.

Same happened with the “Scare Games” logo. Instead of translating into every language they chose to draw an international one.

The original heroine of the Planes movie is Canadian lady-plane Rochelle, but she has a whopping 11 variations depending on the country. For Brazil she was Carolina; for Russia, Tanya; for Germany, Heidi. And each had her own colors.

When the rest of Andy’s toys are searching for Woody in the second movie, Buzz Lightyear gives a motivational speech to them. The original placed him in front of the American flag flying to the national anthem. For the international release, however, the flag was replaced with the globe, and the background music was called One World Anthem.

In Up, the sticker “Paradise Falls” was replaced with a picture of a waterfall to work better for international viewers. The rest seemed to be fine. I mean, balloons on a flying house are kind of universal.

In the international version, Minty Zaki, the racer, was named after the Japanese animation legend Hayao Miyazaki (think Studio Ghibli and movies like Chihiro in “Spirited Away”). The Japanese, on the other hand, seemed to have a problem with that, renamed her to Minty Sakura, and gave her a full do-over.

The news anchor was remodeled for different countries. North America, France, and Canada had a moose; Japan had a tanuki (Japanese raccoon dog); Australia and New Zealand had a koala; China had a panda; the UK had a corgi; Brazil boasted a spotted jaguar.

If you’re a fan of cartoons, check out our list of 18 times Disney Pixar localized movie logos in different countries.

Header Image Source: Photo by Mélanie THESE on Unsplash

Photo credits: Pixar and Disney
Based on materials from Oh My Disney