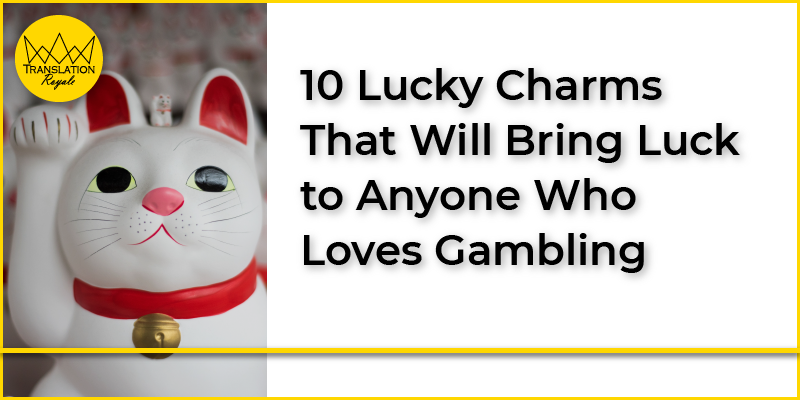 Have you ever wondered what kind of magic can boost your gambling luck and maybe give extra protection from negative vibes? Although I can’t give you a wand and a list of spells to cast, there are several charms, figurines, and amulets that might be able to do the trick.

Among endless variations of charms and amulets that serve different purposes, here are the ten best lucky charms for gamblers that can specifically bring luck and prosperity to them:

Cloverleaf is probably one of the first things most Westerners would associate with the word ‘luck,’ as its history is strongly tied to Irish tradition. Originally, it is a three-leaf clover that is commonly associated with the St. Patrick’s Day. It stands as a symbolic icon for the Christian Holy Trinity: The God, The Son, and The Holy Spirit. However, if the fourth leaf is present, it represents God’s grace.

Whoever finds a four-leaf clover is considered to be very fortunate. That’s because the chance of you coming across it is 1 in 5076. So, good luck finding this “lucky” charm in the wild!

Other than its rare occurrence, each leaf of clover is believed to have its own special meaning. The first leaf stands for hope, the second for faith, the third for love, and the last one for luck.

Nowadays, cloverleaf, in general, has become a widely popular theme for online gambling games, whether there are three leaves or four.

The origin of this horseshoe folklore started with Saint Dunstan who nailed a horseshoe on the devil’s hoof instead of the Devil’s horse. He agreed to release the devil only after he promised not to disturb any place with a horseshoe placed above the main door. Since then, people started hanging a horseshoe on their doors to protect themselves from being disturbed by the devil.

People nowadays believe that if you turn a horseshoe upward, it will collect all the luck inside it’s “U” shape. Turn it downwards, and all of this luck will go away. Surprisingly, some people who believe that a downward-facing horseshoe can shower you with luck.

I guess it is safer to place it in a U-shaped position to gather all the good luck around you and increase the chance of winning lotteries and jackpots.

Maneki-Neko is the Japanese word for “beckoning cat,” which also explains its origin. This lucky cat charm is believed to attract good luck and fortune to its owner by waving them in (beckoning) with its little paw. Because of this belief, it is usually placed at pachinko parlors, cashier counter of hotel receptions and restaurants.

The exact origin of this belief is still questionable, but one thing for sure is that the first record of this lucky cat appeared in the later part of the Edo period in Japan (1603 – 1868).

However, it is so popular among Chinese that it is often mistaken as a Chinese tradition.

There are also different meanings behind which paw it is holding up. Raised left paw is to attract customers to your business while the right paw is to wave in good fortune and money.

Besides paw variations, each color, material, attire, and the item it is holding has its own interpretation of luck. Go for an original calico color or gold figurine with its left paw raised for wealth and prosperity, which is something gamblers really want.

If you are a crazy cat person who loves gambling, this mascot is a purr-fect fit for you.

The Laughing Buddha, also known as ‘Hotai’ or ‘Pu-Tai,’ is actually a Chinese ‘monk’ with a chubby body and a smile as bright as the moon. It can bring wealth and prosperity to households, and those who believe in this folklore would rub the belly of the statue to have their wishes granted.

Just like Maneki-Neko, this one also has different interpretations of luck for different variations. Laughing Buddha with gold nuggets in his hands or a pot of gold is suitable for people who want more prosperity and wealth.

Whether he really brings luck or not, his jolly smile alone can bring happiness to anyone around him.

As the name suggests, a magnificent ray of light shining from the gemstone resembles the eyes of a cat. It is also known to ward off the evil eye, ghosts, and other harmful things in your life.

It is one of the gamblers’ most favorite charms as it guards wealth by reducing money loss and making the business stable.

Keep one of these precious stones in your pocket and be ready for a dazzling fortune coming your way.

This blue-eyed amulet can be found abundantly as tourist souvenirs in the bustling bazaars of Turkey. Typically, it is made of dark blue, light blue, white and black-colored glass in the shape of a circle or a teardrop.

The word ‘Nazar’ is derived from the Arabic language, meaning “evil eye”. It is believed that along with people’s compliments, there can be jealous/ ill-will, or in this case, the evil eye. People who follow this belief use Namza amulets to counter-reflect these unwanted evil eyes and jealousy.

If you are in a streak of good luck during a game, a Nazar amulet might help you to block all those negative energies from jealous people around you.

Hamsa charm, also known as Khamsa, is the symbol of an open right palm with an eye in the middle. Like Namza amulet, it is used to counteract the effects of the evil eye.

Jews believe that it is the representation of the hand of God and five books of the Torah. Meanwhile, in Islam, five fingers are interpreted as the five pillars of the religion: belief, worship, fasting, almsgiving, pilgrimage. It is also believed to be a depiction of the hand of Fatimah Zahra, daughter of the Prophet Mohammed.

Regardless of its religious interpretations, it is widely popular in both Middle Eastern and Western culture as a protective charm used in jewelry and wall hangings.

In Europe (especially in Poland, Czech Republic, and Slovakia), it is a tradition to eat carp fish as a Christmas meal. This tradition is entirely based on the fact that Catholics at that time couldn’t eat red meat during the fast. Hence, carp is served for the feast because of its white flesh. After the feast, people collect one or two carp scales and keep them in their wallets until the next Christmas eve to keep the money flowing into the wallet throughout the year.

Maybe if you happen to eat carp for next Christmas, look for a scale and keep one for yourself. Just don’t forget to wash off the fishy smell!

Lives by other names such as Jin Chan (golden toad) or Chan Chu (toad), this Fengshui charm is a bullfrog with a pair of bright red eyes and a coin in its mouth. Three legs are, in fact, two front legs with a tadpole tail.

Legend says that it will appear during a full moon, near households that will soon receive good news. This Chinese mythical creature is believed to attract money and protects wealth, and wards off bad luck.

Some even put their lottery tickets under the statue to maximize their chances of winning. Perhaps, you can try it too!

Might not be something that a tooth fairy would expect, but keep one to yourself and it will bring more money to you than a tooth fairy will. At least according to American folklore. This charm is specifically known for bringing a great amount of luck to gamblers.

This is not the most aesthetically-pleasing charm, but if it is going to help you get on a winning spree, well…why not?

P.S. For animal lovers, don’t worry! No alligators are harmed since they are known to shed their teeth naturally.

Although there is no definite guarantee that these charms will make you a millionaire in a spin, it can definitely make you feel like one by boosting your confidence. A positive attitude with a mindset to beat the odds are the things that make a person a great gambler!

Do you already have any of the lucky charms that we have mentioned above? Which one do you think would suit your style the most? Comment below and let us know!