Top 5 Gambling Activities in Asia That Were Popular Throughout History 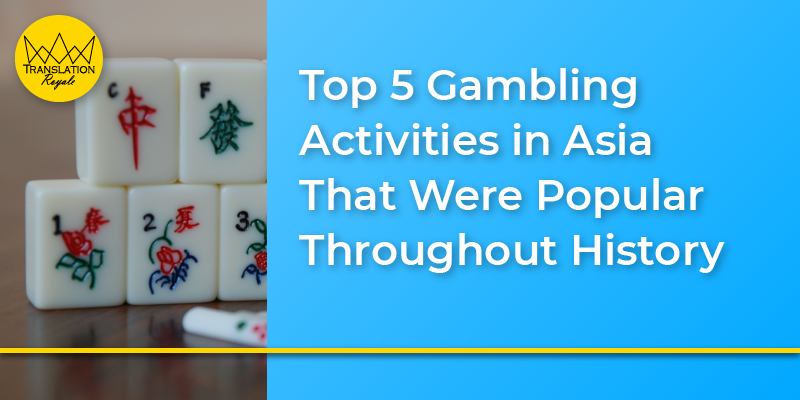 If we talk about gambling in Asia, Hollywood movies usually portray people playing Mahjong in a crowded room full of smoke or a noisy arena filled with people betting on two roosters. Well, it is not 100% wrong, to be honest.

One reason is that they are all trying to portray (or even exaggerate) the underground gambling situation in Asia to make it more interesting (read: dramatic).

Out of all the gambling activities, we have chosen the five most popular gambling activities in Asia with fascinating stories worth mentioning. While some popular casino games are known to be originated in China, some were introduced to Asia by Western culture.

Either way, each game has its unique history and playing style which you will have to continue reading to find out more. 😉

Keno is said to be the oldest lottery game in the world, whose origin can be traced back to the Han Dynasty (206 B.C. to 220 A.D). That’s already over 2,000 years ago, and the Keno game is still going strong!

Players are given a card with numbers from 1 to 80 after which they can choose and bet on a specific amount of numbers. Twenty numbers are drawn at random, and the prizes are given out depending on the set of numbers you picked and the numbers that are matched.

This ancient gambling game got its nickname ‘white pigeon ticket’ or ‘white dove ticket’ because, back in those days, results of Keno games in big cities were sent out to outskirt villages by carrier pigeons. Isn’t that cool?

Because this game was so popular during wartime, the government indirectly used tax money from them to build the Great Wall of China and even finance war affairs. Later on, Keno made its way to the US with the help of Chinese immigrants who wanted to gamble outside their home country. Right now, Las Vegas has claimed itself to be the Keno Capital of the US.

Nowadays, you can even play Keno games at online casinos with real money. All you need to do is pick the right numbers.

Meanwhile, the root of Pai Gow can be traced back to the Song Dynasty (960 – 1279 CE). The name ‘Pai Gow’ can be roughly translated to ‘make nine,’ which is the maximum score of a hand in this game.

To make it simpler, here’s how it is played. The games start with a set of 32 Chinese dominoes which are laid face down on the table and shuffled to get an arrangement of eight stacks with four dominoes in each stack. Then, it’s time to place the bets. Next, each player is given a stack of four tiles to form two hands, each hand with two tiles. To win the game, both the player’s hands must outrank those of the dealer’s respectively. If only one hand wins and the other loses, the player will only get the initial bet back.

One fun fact! There is also a westernized version of Pai Gow called ‘Pai Gow Poker,’ which was invented in 1985 by an American named Sam Torosian. Instead of dominoes, the game is played with a deck of 52 cards and a Joker.

Nowadays, Pai Gow Poker has taken one step up and is available as an online casino card game.

The topic of the most popular games in Asia will not be complete without talking about Mahjong. Although almost all forms of gambling are banned in China, playing Mahjong in legal premises or licensed clubs is completely legal. Since its creation during the Qing dynasty (1644 – 1912) in China, it has rapidly become a worldwide gambling sensation.

The game set generally includes 144 tiles with different Chinese symbols and characters drawn on them. Usually, with four players in a table, the game begins with placing bets before any tiles are dealt. A roll of dice determines the dealer, and later, 13 shuffled tiles are given out to each player. The players draw and discard a tile in each round to complete a winning hand. The first player to get a winning hand of 14 tiles has to shout “Mahjong” to win the game.

Today, Mahjong is more famous than ever – appearing in countless movies (the latest drama hit being ‘Crazy Rich Asians’), became the classic Microsoft tile game, Mahjong solitaire. From land-based casinos to online gambling sites, Mahjong has won the heart of many players indeed.

If you have ever played or seen Pinball before, you will be no stranger to Pachinko, one of Japan’s most popular gambling game. The term ‘Pachinko’ was coined based on the sound of the game being played. Sounds fun indeed!

It is not unfair to describe these electronic Pachinko machines as colorful, flashing and noisy, and at the same time, they perfectly reflect modern Japanese culture. The origin of Pachinko is known to have evolved from the inventions of Pinball. With much cultural adaptation and design combinations, the first true Pachinko Machines came to life in 1926.

The main aim of this game is to hit the jackpot by matching three numbers in a row. Your chances of winning get higher if you can score the tiny steel ball bearings into the middle/”main” scoring pocket at the base of the screen.

Gambling with cash is illegal in Japan, but Pachinko parlors found a way to avoid the law by giving out tokens to the players which can later be exchanged for money. Despite the ban, Japanese gamblers spend around $200 billion on this iconic Pachinko game every year. According to Business Insider news, that is 30 times higher than the annual gambling revenue in Las Vegas.

Since thousands of years back, people have always found a way to bet on any fun activity with a chance of winning and losing, even if it means two animals fighting with each other.

Amongst all types of animal fighting sports, cockfight has become a deep-rooted culture and tradition of several South East Asian countries like the Philippines, Thailand, Bali, and India.

However, each country has its own fighting customs. In India, birds are fought in naked heels while in Filipino games, metal blades are attached to the legs of the birds to cause more vicious fights. Because males are more aggressive towards their own kind, only roosters are used for the fights.

Cockfighting was introduced to the Philippines in 1521 by Ferdinand Magellan during his expedition, according to the records by Antonio Pigafetta, Magellan’s assistant. Currently, the Philippines is one of the few countries in the world where cockfighting is legalized.

The country is also well-known for the bi-annual World Slasher Cup event, which is the biggest cockfighting event in the world. Also known as the ‘Olympics of Cockfighting’, this million-dollar event attracts the best breeders and cockfighters from all over the world!

In Balinese Hinduism culture, cockfights are seen more of as a religious practice than a gambling activity. The blood of the losing chicken is offered to the evil spirits as a form of sacrifice. However, cockfighting without a religious purpose is considered gambling and thus banned in the whole of Indonesia.

While various games have their own history and origin, we can’t deny the fact that they are one of the events that bring people of different origins and cultures together. With the help of technology, gambling has become easier than ever. Instead of waiting for the carrier pigeons to bring the results to you, everything can be played within a click now.

If you want to know more about what popular games are played both online and offline, head over to our Country Profile section to get yourself immersed in a great depth of information with our infographics!