A Quick Guide to the Most Popular Gambling Activities in Europe 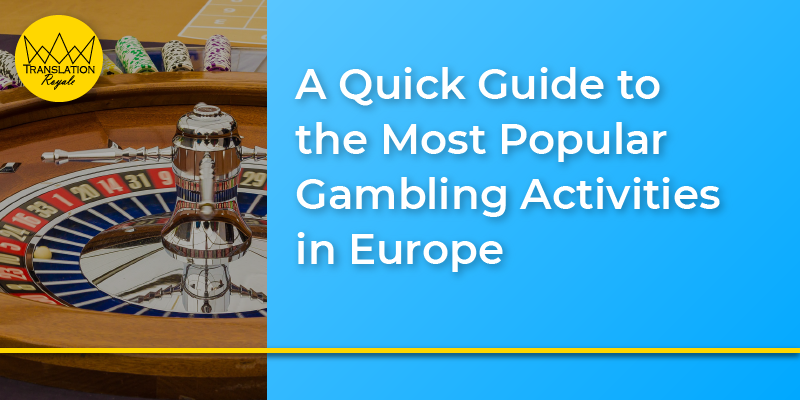 Gambling has always been an integral part of people’s favorite past time activities, and it has remained undeniably popular throughout history. In Asia, Japan is particularly famous for its Pachinko machines, while China has one of the most well-known tile games, Mahjong, and Keno which is the oldest form of lottery to mention a few.

Roulette, which means “little wheel” in French, is considered to be one of the most iconic casino games of all time for both land-based and online casinos. With the rise of technology, the popularity of Roulette seems to increase even more nowadays.

Playing this game is quite straightforward. Players can choose to bet on a single number, different groups of numbers, pocket color, or even whether it is an odd or an even number. A dealer then spins the roulette wheel in one direction, then spins the ball in the opposite direction around the outer track of the wheel. The ball eventually loses its momentum and falls into one of 37 or 38 colored and numbered pockets of the wheel.

Blackjack, or also known as ‘21,’ is a card game that is always played against the dealer. The objective of this game is to beat the dealer by; getting 21 points in the first two cards, reaching a final score higher than the dealer, or getting a hand of 21 without busting (exceeding 21).

The origin of Blackjack is still a very debatable topic in the history of gambling games. Many historians believe that “Vingt-et-Un” (21), a French casino game which was popular during the 17th century, was the origin of Blackjack we play today. Vingt-et-Un was also believed to be derived from two other popular French card games called Chemin de Fer, and French Ferme.

The game made its first literature appearance in one of the novels by the Spanish author Miguel de Cervantes, where he described a card game called “veintiuna,” which means 21 in Spanish. This story was written somewhen between 1601 and 1602, which made readers believe that veintiuna was played in Spain even before then.

Regardless of its hazy origin, Blackjack has evolved over centuries, and its popularity propelled even further forward due to the growing number of online casinos. Thanks to today’s cutting-edge technology, you can now play live Blackjack games by virtually interacting with dealers across the table from anywhere in the world.

A lottery is a game of chance which involves drawing of lots or numbers randomly to win a prize. According to the Oxford dictionary, the name “lottery” is derived from the Dutch word “Loterij,” which came from the word “lot.”

Surprisingly, many governments highly endorse lotteries as the national form of gambling, even when the other types of gambling are outlawed. In the UK, the National Lottery alone was accountable for 21% of the Gross Gambling Yield (GGY) from April 2017 to March 2018.

Thanks to its widespread popularity and rapid technological advancement, lotteries can also be played online, and the global online lottery market is estimated to reach more than $10 billion in revenue by 2023. In Europe, the largest industry leaders of the online lottery market are the UK, Sweden, and Italy.

Lotteries come in different formats, but the odds of hitting the winning lottery numbers are pretty slim, in fact, it is 1 in 139,838,160 if you are playing the Euromillions Jackpot in particular.

Despite the unpredictable and random nature of the lottery, nothing beats the idea of becoming a multi-millionaire one day, retire early, and buy a grand mansion that stretches across thousands of acres.

The first form of lotteries wasn’t from Europe but China. Invented during the Han Dynasty (206 B.C. to 220 A.D), Keno is known to be the oldest lottery game. The largest lottery in the world or otherwise known as “El Gordo,” however, originates from Spain and it has been running ever since the year 1812.

Lotteries also seem to be deeply involved with politics in several countries as it is an easy way for them to increase revenue while entertaining their citizens. It is a well-known fact that tax money from Keno games was used by the Chinese government to build the Great Wall of China. But, it was no different in Europe. During the Roman Empire, Augustus Ceasar used funds from the lottery ticket sales for repairs in the City of Rome, and similarly in France, at the end of the 17th century, income from the tickets were used for municipal and religious purposes.

Sports are thrilling to watch, but what makes them even more exciting is the idea of betting on the results of these sports competitions and of course, winning! This experience altogether is more than a good adrenaline rush.

You can bet on a wide variety of sports, such as football (soccer to our American friends), tennis, basketball, American football, ice hockey, rugby, golf, eSports, car racing and many more. In addition to that, non-human competitions such as horse racing, greyhound racing, bullfighting, and dog fighting are also popular among gamblers. Recently, bookmakers started to accept bets for events which are totally not related to sports, from elections and reality shows to pretty much everything you can think of, to make their business even more profitable.

Bets are usually placed through bookmakers, bookies, sportsbooks, or betting agencies who calculate odds for outcomes on matches and competition that are available on the market.

Generally, sports that are most accessible and viewed in that particular region would be the ones that most people would choose to bet on. In the case of Europe, Association football (the one with the round ball that you kick) is inarguably the most wagered sports, especially in the UK, Germany, Italy, France, and Spain where football craze runs through almost everyone’s blood. Unsurprisingly, these countries also sport the top 5 football leagues in Europe.

Horse racing, on the other hand, is usually regarded as a niche gambling market. It does play a different role in the UK, France, and Ireland which are the top 3 countries in Europe with the highest betting volume for this sport. Horse racing is very tight-knitted especially with the British culture, to a point that the British are famous even for their fashion attire for the races. It is also the horse racing events where Harry Ogden, the first professional bookmaker in the UK, began operating his business.

Whether you are betting small or big, the global sports betting market will continue to thrive, and it is expected to reach approximately €138.93 billion ($155.49bn) by 2024. With mobile phones and internet more readily available than they have ever been, people can easily bet on their favorite games with just a touch on the screen without having to queue at the betting shops or going to the sports event itself. Not to mention the fact that social media is the greatest catalyst in delivering the latest score updates and odds for the games to the players in a blink.

The future of gambling in Europe

Needless to say, iGaming is the next big thing for the gambling industry. From traditional gambling activities and brick-and-mortar, this industry has morphed into a highly-technological platform where gamblers and bettors can enjoy the same adrenaline rush virtually from any part of the word.

Europe currently has the largest share of the global online gambling market, and its economic size was valued at €21.5 billion in 2018 ($24.1bn) and is expected to reach €24.7 billion in 2020 ($27.6bn). Yes, there are still roadblocks for iGaming regulations in the EU, but that won’t stop the industry as a whole to keep moving forward.

The question is – Are you already a part of this technological revolution of the gambling industry? If you are not, it is a perfect time to jump right into it now. We are here to assist you with high-quality iGaming content to jump-start your business.