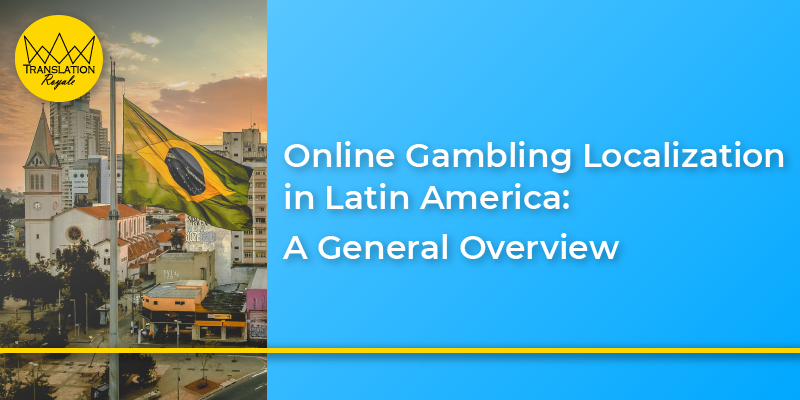 While the UK iGaming giants are rocking in the Brexit ocean, and US-based companies are going through painstaking state-by-state regulations, Latin America seems to be a much more approachable land of opportunities for iGaming business owners.

Despite its 650 million inhabitants, there is no denying that it is still an underpenetrated market compared to Europe or the United States. However, its unrivaled passion for sports, increasing mobile phone ownership, developing mobile-internet connectivity, combined with an ongoing movement for a more flexible online gambling regulatory framework are all proving that the Latin American iGaming market is definitely growing at a speedy rate. Now, let’s take a closer look at it.

Latin America is comprised of 20 countries and 13 dependencies, and it gets even more complicated when you include anglophone and Dutch-speaking countries. Each country has its own preferred languages, unique gambling and betting culture, and specific sets of laws for the gambling industry.

In 2017, the largest gambling market size in Latin America was reported to be Argentina, although this proportion mainly represents land-based casinos. Other countries which are considered to be the most active countries for gambling in Latin America are Mexico, Brazil, and Colombia.

For those looking to target customers in this region, it is important to make strategic decisions on elaborate research and understanding of the diversity of the countries. That is why, before stepping into the Latin American market, it is crucial that you analyze key information such as the market sizes, rules and regulations, gambling interests, popular sports, technological advancement, and last but not least, language variations – all of which we will be discussing later in this article.

Before diving deeper into this topic, let us take you through the general overview of the most prominent iGaming markets in Latin America.

With the help of such regulatory movement, the Colombian government has successfully cracked down on almost 3,000 illegal gambling operations, hoping to shed light on a more systematic online gambling system. With Colombia leading the way, it is hopeful that other Latin American nations will follow its footsteps very soon.

It is the aim of Coljuegos, the Colombian gaming authority, for the country to become the industry leader in Latin America. The next big steps include regulating virtual sports and live casinos in the near future. Although these plans are still in the pipeline, if they were to be implemented, it is indeed a pot of gold for affiliates and operators in these verticals.

This fully regulated online gambling market was initially projected to generate €7.16 billion within the first year, which, in fact, grew by two-thirds just in the first half of that year. Moreover, for this year, Colombia’s online gambling revenue had jumped to COP29.8 billion (€8 million) (as of June 2019) – a whopping 63% increase over the same period last year.

If you are trying to gain a foothold in this country, be prepared for a more competitive race, as major operators are also trying to get a slice of the pie in this promising market. However, there is still a great opportunity for smaller brands to steal a spot in Colombian players’ hearts by putting great effort into localization, player experience, and SEO.

All in all, business-wise, we could say that Colombia is marching strong and fast along the road to a more developed and fairly-regulated gambling economy.

The next big player we want to talk about is Brazil, the homeland of “futbol” legends like Ronaldo and Neymar Jr. For such a football-dominated nation with a population of 221 million, it is surprising to see that gambling is considered illegal in Brazil.

As a consequence of such legal constraints, a lot of gambling businesses had to operate underground, which did more harm than good. But that doesn’t stop Brazilians from placing a wager on their most favorite football games.

According to the Brazilian Legal Gaming Institute (Instituto Jogo Legal), the illegal gambling (including the online sector) market is worth up to €5.73 billion ($6.4 billion) in GGR. The country’s GDP per capita of €8,206 ($9,160) combined with the exploding market value of illegal gambling in Brazil is proving how profitable this iGaming economy can be once regulations are in place. In fact, the Brazilian online betting market can swell up to R$6.7bn (€1.5 billion, as of 1st Nov 2019) if it is properly regulated.

To the industry’s delight, Reform Bill PM 846 was signed into law in Dec 2018 with two years of public consultation to license and regulate wagering activity. As the gambling industry is slowly shifting towards legal operation, the skyrocketing marketing opportunities in Brazil could make the “Christ the Redeemer” statue look petite.

On another note, Brazil has the highest number of internet users in Latin America, and it is the 4th highest in the world, surpassing Indonesia and Japan. With 149 million users in total, online gambling business opportunities are like hidden gems waiting to be unearthed. This country is going to be way easier to penetrate because of this internet availability, so it is not unwise to target Brazil for your next localization move.

In terms of gambling products, sports betting remains the biggest slice of the pie by volume. On the other hand, Poker is recognized as a game of chance, and therefore it is not under any legislation. This also implies that it is a freeway for operators to advertise Poker and leverage their brand using this window of opportunity. Apart from the nation’s favorite sports – Futbol and unregulated Poker market, other popular gambling activities in Brazil include lottery, horse and dog racing.

In the 1940s, most forms of gambling were prohibited in Brazil, and casinos and bingo halls all had to shut down.

In 2016, the value of Mexican online betting businesses reached €1.79 billion ($2 billion), while 90% came from illegal sites. The online casinos offer mainly betting on sports and horse racing – which makes up 60% of the market share, whereas traditional games like blackjack and poker are accountable for the remaining 40%.

When it comes to technology, there were approximately 61.9 million mobile internet users and 83.08 million mobile phone users in Mexico, as of 2018. That means about 74.5% of the total mobile phone users had access to the internet in that year alone. It is now ranked as the 10th among the countries with the most internet users (as of 2019). Hence, opportunity in the land of sports-fanatics lies in leveraging mobile technology.

Argentina is also another promising iGaming market in the region, even though it is a late bloomer compared to countries like Brazil and Colombia. It already has a strong presence of physical casinos, slot machines, and bingo, which implies that locals are no strangers to gambling affairs. Just like its fellow Latino markets, sports betting has a special place in the locals’ hearts.

Statistically speaking, the sports betting market increased by almost €8.96 million ($10 million) during the last six years, whereas the revenue generated from the gambling sector in 2017 alone was approximately €13.61 billion.

Recently, Bueno Aires became the first city in the country to legalize online gambling and sports betting at the end of last year. This means that in combination with the legal brick-and-mortar casinos, slots, and horse race betting, Buenos Aires is surely on its way to becoming an attractive landscape for both local and international iGaming operators.

Generally speaking, Spanish and Portuguese are the two most dominant languages among Latin American countries, followed by English, French, and Dutch.

Brazilian Portuguese (Português do Brasil) is a set of dialects of the Portuguese language used primarily in Brazil. It is also the second most important language in Latin America, and the only official language of Brazil spoken by over 200 million people.

Just like American and British English, Brazilian Portuguese and European Portuguese have their differences, except that they are a bit more complicated. The most famous example would be the differences between “Tu” and “Você” which means “you” in English. While it is acceptable to use “você” in both formal and informal situations in Brazil, this word is only used in formal conversations in the European Portuguese language.

False friends are often found guilty for some of the world-famous localization mistakes, and these two Portugueses languages have no exception either. E.g., in Portugal, the word “propina” means “college tuition fees,” but in Brazil, it refers to “bribe.” Another example would be “rapariga” which means “girl” in European Portuguese, whereas, in Brazilian Portuguese, it means “prostitute.” So, if one doesn’t pay attention to these details, everything could just turn into a marketing disaster.

There are about 450 million Spanish speakers in the world, and 300 of them reside in Latin America. That is 66.67% of the world’s Spanish-speaking population! However, there are so many Spanish language variations scattered across different Latin American countries, and each variety is distinctively different from the others. Main variants include:

It’s not wrong to claim that the Spanish language used in each Latino nation is completely different from another. Especially since each country has different dialect regions within them as well! This means, if you want to be absolutely correct, then you will have to localize for each country! But, that doesn’t sound like a feasible strategy for small to medium iGaming businesses that have a limited budget, does it?

This gives you the opportunity to target the biggest Latin American iGaming markets, and also the most widely understood variants!

Targeting a new generation of gamblers

Like a lot of other iGaming markets, the key to growth in Latin America also lies in the hands of millennials – the digital native generation. This is also one of the reasons why slot games and social gambling are so popular among this generation. Unlike traditional gambling games, these games are designed around diverse themes and niches to appeal to any player regardless of their preferences.

No matter whether it’s Europe, Asia, Africa, or Latin America, millennial expectations are basically the same everywhere – being able to play on multiple devices, catchy themes, and state-of-the-art technology are just a few examples to begin with.

To sum up, the Latin American iGaming market is definitely worth the watch for many reasons, including the oversaturation of existing iGaming markets, and overwhelmingly high interest from players across the continent. One can perhaps suppress the act of gambling, but it is impossible to suppress the nation’s appetite to roll the dice, draw the jackpot or even bet a few thousand Mexican Pesos on some of the most exciting football matches happening in the country.

In terms of localization, the core principles remain the same. Understanding the language and culture of your audience, being on your toes about local sports events, paying attention to the local gambling jargon, and analyzing the technology needs of the region are the keys to a successful localization strategy. It is high time that the investors and operators try to understand the differences between each country rather than treating Latin America as a homogenous region.

Regardless of the constant transformation of the Latino iGaming market, you can always prepare ahead to attract Latin American players through error-free translation to native language content, on-point localization strategies, and relevant technical foundation.

How did you like May Thawdar Oo’s blog post “Online Gambling Localization in Latin America: A General Overview”? Let us know in the comments if you have anything to add, have another content idea for iGaming blog posts, or just want to say “hello.” 🙂